My Thoughts on Sheldon Adelson 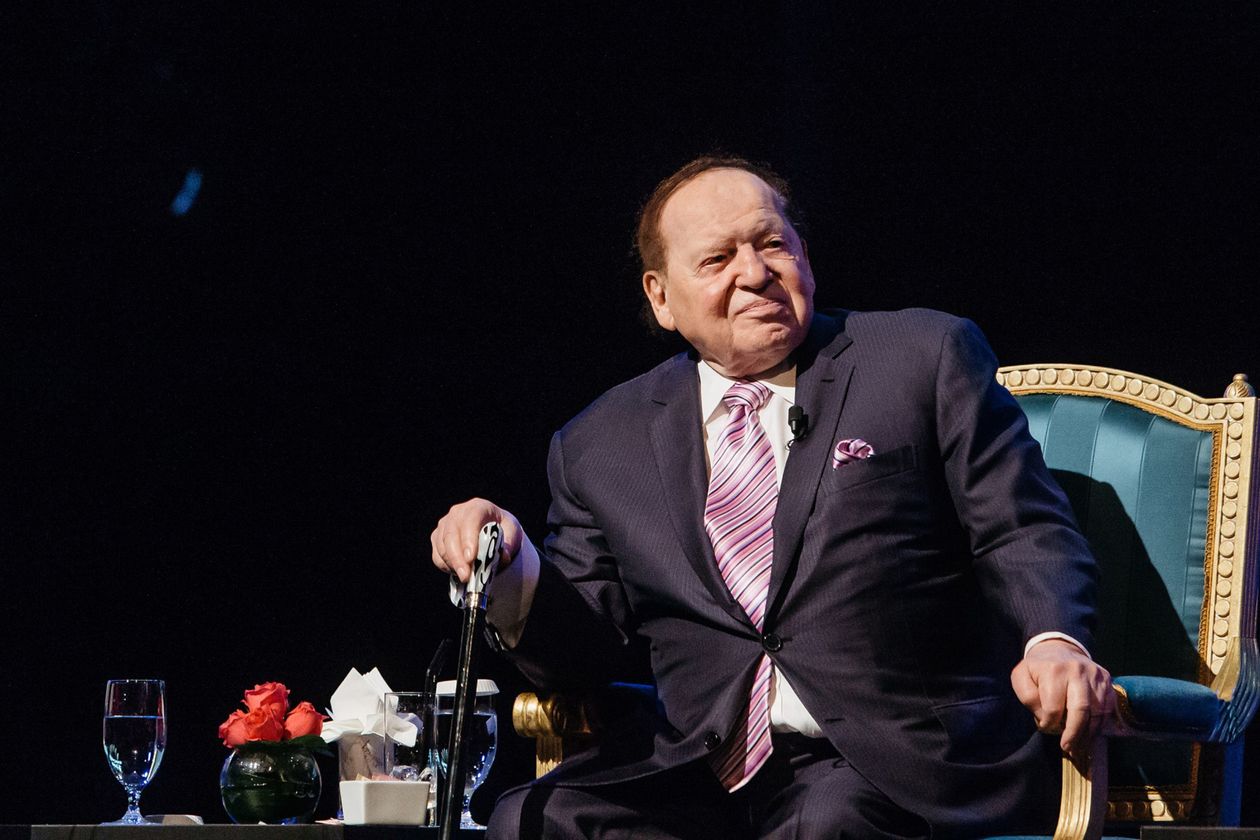 Sheldon Adelson was widely considered a Las Vegas power broker, but he was far more divisive and destructive to the nation and world.  Cast aside the platitudes and the myth — let’s not forget the horrible man who did so many awful things that hurt so many people.

Several friends and many acquaintances asked me for my candid thoughts about Sheldon Adelson, who died a few days ago. A couple of local media outlets even contacted me directly, seeking a quote or two. Presumably, this was because, quite publically, I’ve been an outspoken critic of Adelson for several years. I also organized a boycott of his properties several years ago. I politely declined.

I didn’t decline these requests out of respect for the deceased, nor an adherence to the fallacious notion of not speaking ill of the dead, which is an outright obfuscation of reality. I simply concluded that Adelson’s passing had become inevitable, quite expected due to his advanced age and ill health, and it was best just to move on.

However, since that decision, which I’m quickly coming to regret, I’ve been bombarded with homages to Adelson, both on social media and particularly in the local media (Las Vegas). As one expected, the Las Vegas Review-Journal, the former newspaper he secretly purchased and instantly turned into a raving propaganda sheet for his petty political fetishes (recall his wife Miriam’s witless op-ed trumpeted as the front-page headline several months ago) turned the occasion of Adelson’s death into a cross between a good old fashioned Viking burial and a Tsar’s funeral. Evidence: Note the ten-page insert into yesterday’s paper dedicated to the fabrication of the phantasm of the man ranked as the 19th richest person in the world. By the way, last year’s Super Bowl insert was only 8 pages, so Adelson’s now bigger than the Super Bowl.

I recognize now that the only means to blot these illusions and soothe the annoyances that linger with letting lies perpetuate is to rise up, be direct, and simply tell the truth. I don’t profess impartiality on this matter.

Let me be clear: Sheldon Adelson was my enemy. He, his voice, his vast wealth, and his enormous influence have been used for decades to destroy every single vestige of progressivism. He did enormous harm, to millions. Accordingly, it’s not a choice but rather a duty to give some balance to the many myths that Adelson’s army of sycophants is now spinning. Allow this to be one voice of dissent.

Fact: Sheldon Adelson was a hateful, stubborn, insensitive, divisive, fearmongering, vile, corrupt bully of a powerbroker who was one of the most dangerous men in the United States. Regretfully, his evil deeds and wicked ways are not confined just to Nevada, nor Macau, nor even the U.S. Perhaps Israel and its people may end up paying the highest cost for his activism. We’ll see how that plays out, the impacts of his actions not yet evident.

Case in Point: He encouraged and funded the most extreme theocratic maniacs and fanatics in Israel and the American political establishment, refusing ever to give an inch of compromise on any measure that might have advanced peace and stability.  As an avowed Zionist, he was an obstacle to peace, a co-conspiring criminal who advanced illegal settlements in the West Bank, and always took hardline positions against the Palestinians that sometimes, by comparison, made even Benjamin Netanyahu seem like a peace dove. His racist, far-Right extremism became self-evident when he publically stated in 2013 to explode a nuclear bomb in Iran. Think of it: A major political figure advocating the use of nuclear weapons in the Middle East. If he wasn’t so wealthy and powerful, he would have been called for what he was — a madman.

His political activities in the United States were no less dangerous and deranged. He became widely acknowledged within conservative circles as a virtual kingmaker. Republican presidential candidates, reduced to whoring themselves out as obedient serfs, willingly flew to his kingdom in Las Vegas, lined up for his blessing, kissed the ring, promised to support his pet projects, and begged for his millions in donations. This egregious act of backroom bantering became known as “the Adelson Primary.” He was THAT powerful. He was that feared. So much for democracy in action. Newt Gingrich, a disgraced and dishonest charlatan who has been reduced to jesturing himself on far-Right alt. media, got Adelson’s blessing in the 2012 election, receiving a reported $30 million on a flop of a campaign that went nowhere. A few years later, Adelson backed Donald Trump and has since given more than $100 million to various Republican candidates and causes.

He was obscenely wealthy, yet years ago while he funded the construction of the Venetian, what would become the first crown jewel in the Sands casino empire, he ran into serious financial trouble. So, he did what all cutthroats do — renegotiating debts, stiffing contractors including small businesses, resulting in a flood of lawsuits. Though he would become worth tens of billions, Adelson had no problem screwing the little guy. When things didn’t go his way, he sued. If anyone spoke out against him, he threatened to sue. He used his money and his power to silence dissent. Most of the time, it worked.

Nothing made this more self-evident than when Adelson, in a caper that so embarrassingly became exposed thanks to some great undercover journalism here in Nevada, secretly purchased the largest newspaper in the state, the LV Review-Journal. Instantly, most of the experienced news staff resigned and the paper went from covering local news and uncovering scandals to what might as well have been Adelson’s company newsletter. Important investigative features on Adelson’s own dubious deeds in Nevada, his myriad of murky court cases, and particularly his illegal actions in Macau, utterly disappeared from the pages, purged from the newsroom. Instead, the LVRJ became a mouthpiece for Adelson’s personal pet peeves, morphing into a pro-Trump, anti-progressive rag. It elevated people who were punch lines, such as Wayne Allen Root the former sports tout, to political commentators.

He vociferously opposed all forms of online gambling including Internet poker and single-handedly funded the largest organization that destroyed what had been a healthy industry, throwing thousands of good people trying to make a living out of work and ending sources of income during what was known as “the poker boom.” He extinguished lives and livelihoods. which was comically ironic given Adelson made his vast empire off of…….gambling. So much for being an advocate of free markets, competition, and individual rights. Adelson talked a good game on capitalism but he walked a very different line. He was a grotesque hypocrite, a money-mad oligarch obsessed with seizing it all. Naturally, he hated unions.

I had the occasion to see Adelson speak twice. I was astounded to witness just how ordinary he was, void of any humor or sense of compassion Unlike so many other billionaires and human self-made success stories, who display captivating opinions and display obvious magnetism merely for their accomplishments, Adelson was the anti-charmer. If there was a word I would use to describe him, it would be — boring.

Some have noted publicly during this post-mortem, that Adelson did some good things in his life, particularly in his final months. That’s nice. Sometimes, good people do bad things. And bad people do good things. It’s no accident that Adelson has been credited (rightfully) with paying his employees during the pandemic, while the other powerful corporations he so willingly enabled with his nefarious political activities, were not so noble. Certainly, the millions in tax cuts for Adelson and the Sands Corp. more than offset the cost of his generosity. And, who knows if Adelson — aware of his own mortality early last year following a cancer diagnosis, wasn’t eager to spend a tiny percentage point of his vast fortune to buy some positive publicity after a lifetime of accumulation and greed. Still, for those workers who received their salaries, I concur as to why they might be under some spell of his benevolence. Too bad the tens of millions of other Americans who didn’t work for Adelson had to suffer from the consequences of his “small government” mantra. In short, he created far more pain for hundreds of millions than comfort for a few thousand, in what might have been nothing more than a PR stunt.

Have I made myself clear as to what I think of Sheldon Adelson?