The Nine Lives of Herbert “The Cat” Noble 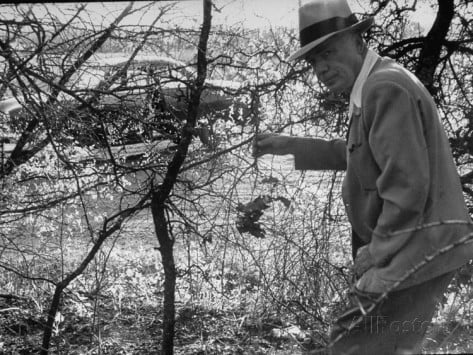 Herbert Noble somehow managed to defy the odds and survived.  He withstood no less than eight assassination attempts on his life.  But Number 9 was the end.  Here’s the story of “the Cat.”

For a long time, Herbert Noble beat the odds.  He somehow managed to survive no less than eight assassination attempts before his luck finally ran out in the worst possible way.

Not many underdogs beat the favorites, back then.  Marked men with a pretty price on their heads weren’t destined to survive.  Almost always, their bodies ended up riddled with machine-gun bullets, filled with 12-gauge buckshot, or blown to smithereens in an “accidental” explosion that never got solved.

But time after time after time, Noble somehow managed to defy the odds and survived.  He withstood no less than eight assassination attempts before his luck finally ran out in the worst possible way when he naively stuck his right hand into a wired mailbox triggering a blast that sent limbs and body parts flying and tumbling to the ground as far as half a football field away.

Noble’s nine lives earned him a most appropriate nickname.  “The cat,” he was called.

This is the story of The Cat and his nine lives.

Noble had enemies — including some powerful and dangerous enemies.  But none was more powerful and dangerous than a rival gambler and racketeer of about the same age with a similar background as he who competed with Noble and others for the lucrative dice and numbers game action centered around the east end of sprawling downtown Dallas.  We’ll get to Noble’s nemesis a bit later.

Dallas was a wide-open city back in the 1930s.  All forms of vice — including gambling, drugs, and prostitution — weren’t merely tolerated.  They were openly permitted in certain areas of town, primarily around what’s known today as Deep Ellum.  Here’s a first-hand account of Deep Ellum from that period:

At the time, you could find gun and locksmith shops, clothing stores, the Cotton Club, tattoo studios, barber-shops, pawnshops, drugstores, tea rooms, loan offices, domino halls, pool halls, and walk-up hotels.  On its sidewalks, you could find pigeon droppers, reefer men, crapshooters, cardsharps, and sellers of cocaine and marijuana.  Sometime around World War I, Lead Belly and Blind Lemon Jefferson got together and began composing folk tunes, with (Deep Ellum) often in the lyrics.

The vice trade was frighteningly dangerous.  Rival operators targeted each other and killed off the competition.  Hundreds of grifters and gamblers, hardly innocent of serious crimes themselves, met a murderous end.  Even the Mafia, mostly centered in the American Northeast, which had grand designs on western expansion into fast-growing cities such as Dallas which were stoked with lots of money and new opportunities, determined that engaging in a takeover fight wasn’t worth the trouble of starting a crime war.  The vice rackets in Dallas were just too wild and dangerous.

That’s the risky business Noble entered and eventually came to thrive in as a rising star within the Dallas underworld.

Noble had humble roots.  He grew up a few blocks away from the same skid-row squalor of West Dallas, which is the same neighborhood that spawned notorious bank robbers, Bonnie Parker and Clyde Barrow.  Noble tried his best to go straight for a while.  But each time, the lure of big-time gambling presented a temptation that became impossible to resist, and eventually too strong a grip to leave behind.

The world may have been at war during the early 1940s, but Dallas had its own wars, and they were fought in the streets and back alleys with guns and bullets, ultimately settling who would control the rackets.

By this time, Noble had become the proprietor of one of the city’s most profitable backrooms, a joint called The Airmen’s Club, known by just about everyone in town who was inclined towards that sort of thing.  Known for its honest games and reputation as a place where the occasional winner would actually get paid, The Airmen’s Club did well.  Really well.  Some even thought they were doing too well.

The gambling traffic in rival joins began getting lighter.  Noble’s main nemesis, that powerful man referred to earlier, took notice.  He demanded a greater share of the take.

According to documents uncovered by writers and researchers, Noble’s nemesis wanted to increase his cut of the illegal gambling action from 25 percent up to 40 percent.  Aside from his own gambling joints, this nemesis was already pulling in a steady income from The Airmen’s Club.  Still, he wanted more.

When Noble refused to pay the percentage hike, that’s when the trouble started.

Noble must have known what he was getting into.  He must have been aware that his fateful decision to reject forking over an increasing percentage of the weekly grift would have serious, perhaps even dire consequences.  Noble’s chief nemesis had a well-deserved reputation for violence.  Deep Ellum was littered with the bodies of those who refused to play along.

The intimidation began slowly.  First, the Dallas Police Department mysteriously showed up one afternoon and tried to shut the club down, while ignoring every other gambling joint in town.  When that scare tactic didn’t work, Noble eventually opened back up again and one night in 1946 he found himself trying to outrace a black Cadillac with sawed-off shotguns pointing out the windows.

That incident set off a five-year run of Vaudevillian-style dog-and-cat chases where Noble always somehow managed to miraculously escape.  But the hired assassins came close to their getting mark several times.  “The Cat” was hit with gunfire so often he even acquired a few alternative nicknames, including “The Clay Pigeon.  He reportedly had so many holes in his body, he was called “The Sieve.”

Tragically, while Noble continued to outfox the hired killers and sometimes just got lucky, his wife Mildred wasn’t as fortunate.  She met a frightfully bloody death ending in complete dismemberment one cool November morning when she extraneously planned to drive her husband’s car and ended up blown into a thousand pieces across the street.  The would-be assassins had loaded Noble’s car with a nitro gelatin compound, which ended up killing his beloved wife entirely by accident, turning her into biological confetti.  [See Footnote 1]

If the previous attempts at murder and mayhem had made his life stressful, the senseless death of Noble’s dear wife unhinged the 41-year-old outlaw-businessman past the breaking point.  It rendered his remaining years a zombie-like purgatory of constant fear and paranoia.  Everyone around him became a suspected assassin.  Casual strolls down sidewalks or drives down city streets became a dreaded daily routine.  Common tasks became dicey exercises, performed at Noble’s own peril.

In all, there were nine attempts on Noble’s life that were carried out by contract killers.  Plus two other failed pursuits were thwarted when stray witnesses saw unidentified men planting explosive devices beneath Noble’s car.  Eleven in all.  All were presumably hired by the same person, Noble’s chief nemesis.

Although the rival was eventually forced out of Dallas and moved elsewhere late to begin a new life, he retained his percentages of what was left behind in the underground clubs, forwarded on to the hungry pocket of the man who behind Noble constantly living in fear.  [See Footnote 2]

Noble was shot at and hit on at least three occasions.  Part of his right ear was blown off.  Eight times he survived these bombs and blasts.  That is, until the blistering hot morning of August 7, 1951, when the odds finally caught up with Noble and he ended up crapping out on a dusty dirt road in Denton County, northwest of Dallas.

Checking one’s own mail isn’t generally thought of as a deadly decision.  But when Noble casually reached into his mailbox just outside his ranch, that act would be his last on the earth.

Noble most certainly didn’t feel much.  His entire torso was instantly vaporized in a violent chemical blast that sprayed blood and body parts like wild mushrooms blooming over the Texas prairie.  The only identifiable limb belonging to Noble was blown over a giant oak tree.  There were no witnesses.  The crime was never solved.  The murderers got away.  No one was even so much as charged with a crime.

A short time later, the word of Noble’s savage murder reached the interiors of 128 Fremont Street in downtown Las Vegas, at a new place that had just opened up called Binion’s Horseshoe.

When told of what happened some 1,300 miles away back in Texas, the man who would later be celebrated as the gambler’s true friend, a casino patriarch, a city father, and the creator of the World Series of Poker, was quoted to have said, “I’m glad he’s dead.”  [See Footnote 3]

“The Cat” had finally spent his final life and Herbert Noble was now extinct.

Note:  I wrote this after reading a new biography by Doug J. Swanson, an investigative reporter for The Dallas Morning News.  His forthcoming book, “Blood Aces:  The Wild Ride of Benny Binion” is scheduled to be released in August 2014.  I read an advance copy and will post a review once the book becomes available to the public.  Swanson’s biography goes into far greater detail about the lives of Noble and Binion.

Footnote 1:  According to multiple sources, one of the alleged assassins was the infamous R.D. Matthews, a lifelong friend of the Binion family.  R.D. Matthews became noted for several bizarre instances during his lifetime, including once when he was in his 80’s and punched out the late casino mogul Bob Stupak at Piero’s, a popular Las Vegas restaurant.  As for the crime of killing Noble’s wife, R.D. Matthews told police, ” I didn’t have a goddamned thing to do with it.”

Footnote 2:  At one point, Noble became so fed with living his life as a target that he tried to kill Binion.  That plan which is told in greater detail in Swanson’s forthcoming book (see above) proved unsuccessful.

Footnote 3:  Although he was never charged nor convicted, not much doubt remains that Benny Binion was behind the many assassination attempts and eventual death of Herbert Noble.  This allegation has been made in several books and articles, without any denial from relatives or survivors.