The Latest News from Poker Night in America 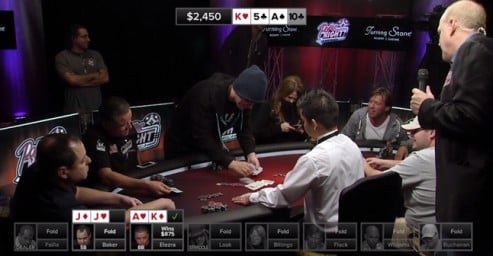 Here are some random thoughts about the television show I’m currently working on, which is “Poker Night in America.”

The show airs twice weekly on the CBS Sports Network.  Original episodes are broadcast every Sunday night.  The same program is re-run again on the following Saturday night.  We have also seen the show appear on Thursday nights occasionally (this is at the network’s discretion).

Side Note:  Air times have been sporadic.  This is because we are subject to sporting event run-overs (college football, etc.) which sometimes pushed the starting times back.  Occasionally, the show even gets bumped.  We can’t do much about this, other than to make college football not go into overtime.

“Poker Night in America” remains a work in progress.  The show has overcome huge odds just by the fact it’s made it to national television and has even found an audience with many viewers.  Ratings are solid and the network is quite pleased with what’s been accomplished, so far.  This is a testament to Todd Anderson’s grand vision as the show’s creator, the unwavering support given to us by Rush Street Productions in Chicago, a stellar film and editing crew that is as dedicated as any group I’ve ever worked with, and lots of support within the poker community — including players who have appeared on our show.

I’m astounded that every player without exception who has joined us so far has been highly complimentary about what we’re trying to accomplish.  Frankly, I did not expect this level of support and enthusiasm.  Poker (especially televised poker) can be a very rude awakening, especially for optimists and those who seek predictable outcomes.  But nothing is predictable when it comes to televised poker.  I’ve learned that it’s a real challenge to consistently pull off good programming every week, given there are so many moving parts within it — including the turn of the cards, the reactions of players, the side action.  What has really sustained us is realizing that the vast majority of those who know about “Poker Night in America” want the show to be successful.

Here are some of my personal thoughts about the show, now about midway through its first season on the air.  To date, nineteen 30-minute programs have aired.  Season One ends in late December:

(1)  WHAT’S “THE BIG GAME” REALLY LIKE? — I remember what it was like to walk into a public cardroom and play for low stakes.  Years ago, in most of the popular poker rooms, there would be “the big game” going over in the corner somewhere.  Back then, I always wondered what it would be like to sit in “the big game.”  What happens there?  What are the players like?  Who really wins and loses?  Unfortunately, most people never get the chance to sit in a game like that.  “Poker Night in America” wants to be the eyes of average poker plays and a window into what happens there on the felt, albeit distilled into much shorter segments.  We want a sort of raw energy on the air, because that’s what poker is really like.  This flies in the face of conventional wisdom about poker television where the chaos is more controlled.  Ours is an experiment, with mixed results.

(2)  FILM DIRECTOR ROBERT ALTMAN, OUR MENTOR — Those who remember Robert Altman, the film director, know of his unusual technique where he often allows his actors to ad-lib (in his classic movie M.A.S.H., the dialogue was reportedly 80 percent unscripted).  Altman movies often have actors talking at the same time and stepping on other people’s lines.  While we would never compare ourselves to Altman’s great movies, we do favor this technique because this is the way life (especially at the poker table) really happens.  Yeah, sometimes things spin out of control and stories just fade out and go away, without a final resolution.  That’s the way most poker games really are.

(3)  THE MONEY IS REAL — It’s important to note these really are live cash games where players are putting up their own cash.  Some even have to borrow to get into the game.  Moreover, state regulations are different in each setting where we have filmed.  Some states are far more difficult than others when it comes to running a high-stakes game.  Issues of game location, surveillance, floor calls, live straddles, and so forth are different everywhere we go.

(4)  THE FUN OFTEN OCCURS AWAY FROM THE TABLE — For me and the crew, much of the fun stuff takes place outside the poker room.  Maybe we just like to get outside and see top players in different settings.  We’re willing to try just about anything, and the crazier the better.  So far, we’ve filmed the players on the golf course, at a bowling alley, in bars and restaurants, in sports arenas, on a ranch, and even in congressional offices and in front of the White House.

(5)  A NATIONAL FORUM FOR AMERICA’S CARD GAME — I did not expect most of the film locations to be in the Northeast.  But that’s what’s happened so far, with high-stakes games filmed in Upstate New York (2), Pittsburgh (1), and Baltimore (2).  Just one location took place in the West — which was Reno (1).  We’ve also shot lots of footage in Montana, Washington, D.C. West Virginia, and of course, Las Vegas.  Hopefully, given more time and opportunities, we can film just about everywhere poker is played in America.

(6)  MY PERSONAL FAVORITE MOMENTS — I’ll do a separate column on this soon.  But the short list of favorite moments over the first season of filming was hanging out on Capitol Hill with members of Congress, doing a photo shoot at the White House, shooting guns with the Brunson Family, and watching Scotty Nguyen do an hour of magic tricks up close.  Amazing stuff, most of which hasn’t been shown on TV yet.  The best is yet to come.

(7)  THE VERY BEST BROADCAST MOMENT — Hands down, my favorite time on the broadcast was filming an hour-long movie retrospective of the most famous poker scenes on film.  The scenes were dissected by famous film critic Richard Roeper, who joined us in New York for one of our cash games.  He was flanked by actress Jennifer Tilly and the wildly unpredictable Phil Laak, who all added different perspectives of the best poker scenes, both from a players’ and critics’ perspective.  Our host, Chris Hanson, was also in top form for this shot.  This was television gold.  Everyone on the crew wanted this segment to go on long past the hour because it was so much fun and so interesting.  This feature will air sometime early in 2015.

(8)  FOND MEMORIES OF CHAD BROWN — Everyone in poker loved the late Chad Brown.  He passed away in July.  I believe our show was the final time he appeared on television.  We thought that Chad deserved a special tribute, which was filmed and aired last month.  I was proud of our crew for making this happen.  While “Poker Night in America” is about fun, it should also have a serious side and this was the appropriate time to tone things down and reflect.

(9)  NOLAN DALLA ON TELEVISION? — Originally, I had no interest in actually appearing on our show.  I’m just not that comfortable with the idea, nor am I good in front of the camera.  I’m trying to work on that.  But this show is about poker and the players, not about me.  I’m just a conduit for making the entertainment happen.  Others on our crew felt differently, and so I was asked to do what was initially supposed to be an “Andy Rooney-type” segment at the end of every broadcast.  We filmed a few of these where I planned my remarks.  The crew opted to go with a much more freestyle approach, where I go off on completely unscripted rants about various topics.  I am still not entirely comfortable with this notion, fearing I come across as a bit of a clown.  But I also find this unscripted approach to be edgy, and even a little dangerous, so I’m going along with it for now.  I’m willing to experiment, which is one thing I really like about the show — you don’t know what’s going to be said next….hell, I don’t even know what I’m going to say next most of the time.

(10)  RAMPING UP PRODUCTION VALUES — We’ve got to improve some of the technical aspects of the show.  I hear these concerns a lot from those I’ve spoken to who have watched the show.  We need crisper and clearer audio.  If they can film a show in the Amazon, we should at least be able to get as good sound quality at a poker table.  Also, the graphics used in the show were and remain an experiment.  We didn’t want to go with the same approach used by other shows.  This was one of the alternative models.

COMING SOON — So, what’s ahead for “Poker Night in America?”  Well first, we are filming at the Rivers Casino in Pittsburgh for the second time, Nov. 13-15.  We are inviting some of the Casting Call players who expressed interest and will be announcing our list of pros soon.  The online site 888Poker will also be providing a few players via their giveaway to players in New Jersey.  After that, “Poker Night in America” heads to south Florida for the first time.  We are filming two segments at the Seminole Hard Rock Casino in Hollywood, FL in early December.  One game will feature pros and amateurs.  The other will be a “Ladies Night,” featuring most of the top female poker players in the world sitting in a cash game together for the first time.   We are excited to announce this later in the week.  Stay tuned.

From December 1-3, 2014, Poker Night in America, a nationally-televised poker-themed reality show, will film high-stakes gaming action during the final week of the series.  Two cash games and the RRPO $2 million guarantee championship final table will be aired on CBS Sports Network over eight episodes coming in spring 2015. The broadcast schedule will be released at a later date.  In addition, the championship final table will be live-streamed on PokerNight.com and SHRPO.com.

The Championship will feature a $2 million guaranteed prize pool, with 30,000 in tournament chips and two starting flights on Friday, November 28.  Players may play either starting flight or both if they are eliminated on Day 1A.  Re-entry will be allowed until the start of level 7.

Registration is currently open.  To participate, players must obtain a free Wild Card at the Player’s Club or in the poker room.  More information, schedule, and contest rules can be found at www.SHRPO.com.

About Poker Night in America

“Poker Night in America” is an edgy new television series and window into a behind-the-scenes reality that has never been attempted before.  Part real-life poker coverage, part unscripted reality television, Poker Night in America is the first program ever to show what really goes on away from the tables and behind the cameras.  Poker players and cast members are followed around airports, casinos, golf courses, bars, restaurants, or wherever a compelling story takes place.