When I first heard El Cholo was the favorite late-night hangout for actor Jack Nicholson right after Laker games, I knew this was the place to visit.

El Cholo first opened up in 1923.  It was founded by Mexican immigrants who nurtured their family business and handed down secret recipes over multiple generations to the present day.  Nearing a full century in business, El Cholo has since expanded outward to other locations throughout Southern California.  However, the original flagship restaurant location remains at 1121 S. Western Avenue, just a short distance from downtown Los Angeles.

There’s lots to love about El Cholo, which has varied meanings in the Spanish language — from “peasant farmer” in some Latino regions to what’s regarded as a derogatory term, particularly in Peru.  Jack Nicholson’s tastes and his endorsement aside, there were a number of things which attracted me to try out this historic location, most of all its authenticity and obvious recognition of its heritage.

Legend has it that the dish we all know as “nachos” was introduced here during the 1950’s.  According to El Cholo’s restaurant history which is posted on the wall in the lobby area, a former waitress named Carmen Rocha crafted nachos in San Antonio, before moving later on and introducing the dish to Los Angeles at El Cholo, where she worked up through 1959.

One of the most impressionable things about El Cholo is the “Louis Zamperini Room,” which is named after the Los Angeles native who was once an Olympic athlete (competing in the 1936 Games held in Berlin) who later enlisted in the U.S. Army-Air Corps, was shot down over the Pacific Ocean, miraculously made what was then the longest survival on a life raft on the open sea in history, only to be followed by capture, imprisonment, and torture in a prisoner-of-war camp in Japan during World War II.  If this story sounds familiar, last year’s movie “Unbroken,” based on the best-selling book by Laura Hillenbrand was based on Zamperini’s life.  Any place that honors such a remarkable man in this special way with his own dining room, complete with photos of the genuine hero who died last year at age 97 merits a visit in my estimation.  [Note:  My review of Hillenbrand’s book can be read HERE]

With so much going for it, I really wanted to like El Cholo.  But blatant honesty can be a painful thing.  Unfortunately, I probably won’t repeat as a customer.  I can’t recommend this historic establishment for at least a couple of reasons.  Before I get to these critiques, first here are a few positives. 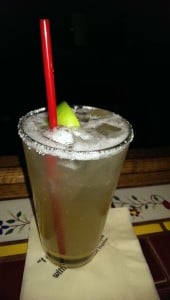 El Cholo makes a fantastic margarita on the rocks.  I ordered the house specialty, which was splendid.  Everything about this staple of Mexican cuisine was perfect, from the generous portion served, to the kosher salt on the outer rim, to the frothy shaken ambiance atop the cocktail, to the float of Triple Sec, to the exceptional lime-based mixer which was as good as any margarita I’ve ever had outside of Dallas.

The layout of the restaurant and ambiance as also quite pleasant.  The adobe architecture throughout — both inside and out — which divides several rooms into different sections provides for an unexpected quaintness, even though this is a large-scale operation capable of serving hundreds of covers at a time.  One gets the feeling that a discovery has been made — a nice quiet restaurant no one else knows about, although that’s the furthest thing from the truth.

The food is also pretty good.  Not great, but generally pleasing.  I say this having enjoyed so many Mexican meals in so many different cities that I’ve now lost count.  Yes, I do know what great Mexican food is — and on a scale of 1-10, this gets a solid “7.”  My dinner included two beef enchiladas rolled in corn tortillas.  I also ordered the New Mexico-style green chili sauce (not a fan of the usual red sauce), which gives the dish a bit more kick.  I added a chicken taco.  The platter came with the customary rice and refried beans.  The standard chips and salsa were fine (chips were warm, a good sign).  Salsa was a bit of a bore — nothing special.

So, where did El Cholo go wrong?  Here are two criticisms.

First, the service was atrocious.  I felt like the invisible man during most of my one-hour stay.  I waited for what seemed like forever to get served.  Then, the waiter barely came around at all.  I was forced to rely on a busboy who didn’t speak much English (most of the staff were Mexicans).  Contrary to what I often write, I tend to be very tolerant of slow service and miscues.  However, this entire episode was unnecessary and unforgivable.  The restaurant wasn’t busy (I dined late in the afternoon).  But each time I needed something, a member of the staff would be around but never make eye contact (something which drives me crazy).  I resorted to shouting at one point in order to get someone’s attention.  One supposes that Jack Nicholson never had to resort to these measures.

Second, was the lack of value.  The bill finally arrived (after considerable begging for the waiter’s attention), which amounted to a whopping $35.45 for one patron.  Seriously, who in the hell spends $35 on Mexican food, with just one drink and no frills?  $35?  I could have eaten in Chinatown for a week and bought extra lottery tickets for that amount.  I did some quick calculations and the enchiladas must have run about $20 (about 33 percent higher than average elsewhere based on my experience), plus another $6 for a chicken taco, then $10 for a margarita.   In hundreds if not thousands of meals over the years, I may have tipped less than 20 percent only a handful of times, but given the non-existent waiter and being engulfed with neglect from start to finish, I tossed two $20 bills on the table and stormed out.  Fuck it.

What a shame.  El Cholo should be much better than this.  Based on the utter lack of value combined with the abominable service, I must strongly recommend dining elsewhere.  There must be hundreds of Latino-themed restaurants in and around Los Angeles which are far superior.  Next time, I’ll embark on that discovery.

Postscript:  Special thanks to Jessica Welman, who once lived in Los Angeles and graduated from USC which is close by.  She recommended El Cholo based on its reputation but was also careful to warn me that it might not be the same place that it once was.  Welman, who previously recommended Philippe the Original to me (another Los Angeles institution) remains undefeated in her culinary assessment.  [READ MY REVIEW OF PHILIPPE THE ORIGINAL HERE]