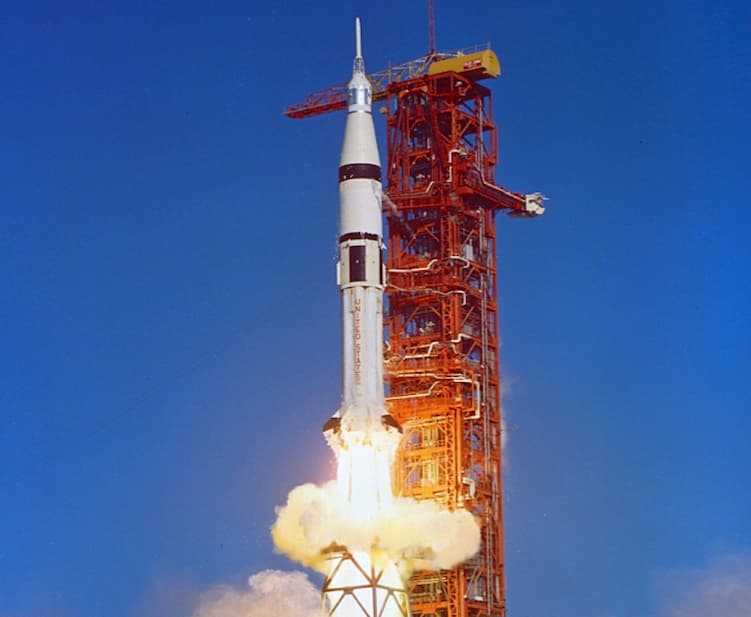 Now approaching the 50th anniversary of the Apollo 11 space mission, get ready for a bombardment of well-intended but predictable homages and historical remembrances to humanity’s greatest technical achievement.  However, one documentary towers above the rest.  The latest episodes “American Experience” on PBS take a familiar story you may think you already know and add some unexpectedly compelling twists and turns — making this the best documentary of the year.  In short, watching “Chasing the Moon” is a blast.

Chasing the Moon is a three-part television series running this week on PBS stations all over the country.  It’s the latest offering from American Experience, the typically outstanding weekly documentary which has run for 31 straight years (and counting), yet it somehow still manages to stay fresh with every new episode.

This latest series divided chronologically into three parts at two-hours each (six hours, total) might be the most compelling of what’s been an extensive historical canon, which is really saying something given that American Experience has aired 337 episodes, to date.  Rarely have we collectively watched such an authentic, unabridged, behind-the-scenes story told with such a perfect balance of accuracy and entertainment.

So, what else makes this show so good?

Try this — brutal honesty.  Most, if not all previous documentaries on America’s space program treat the subject with jingoistic reverence.  The astronauts are heroes.  The United States beat the Soviet Union in the race to the moon.  Each successive space program — Saturn, Gemini, and Apollo — represented a concoctive triumph of American ingenuity.

Each one of these points is undeniably true.  Yes, the astronauts were heroes.  Yes, the USA did beat the Soviet Union in the space race.  And yes, Apollo 11 was indeed justification for worldwide celebration — the glorious equivalent which had not seen before, nor since.

Chasing the Moon, made by Robert Stone, extends far beyond what’s been a standard fluffy newsreel-driven, school-classroom interpretation of American history, both in terms of which stories are told and how they are portrayed.  It’s far better than a Tom Hanks’ movie.  It’s even better than the wonderful CNN-produced movie on the space program released earlier this year, which I saw and enjoyed.  This series takes that concept, then digs much deeper.

If you think you already know about the space program and the remarkable story of Apollo 11, consider just a few eye-opening, jaw-dropping facts purveyed from the first episode titled, “A Place Beyond the Sky,” which covers the early period of the American space program, roughly years 1957 through 1963:

FACT #1 — Americans landed on the moon (first) because we got the smarter Nazis.  We were lucky.  After World War II and the downfall of Nazi Germany, the East and West divided former-Nazi scientists who had been the first to develop advanced rocket technology.  Ugly pasts were scrubbed.  Old associations were buried.  History was forgotten.  This story isn’t exactly new, of course.  But it’s told in this documentary with refreshing candor that lends to credibility for other controversial aspects of the film.

FACT #2 –— America’s space program had absolutely nothing to do with the pursuit of scientific progress, at least in terms of attracting popular support.  The NASA space program was all about one thing only — winning the Cold War.  Early on, America was losing that crucial battle.  1. The Sputnik satellite in 1957, followed in short order by 2. Laika the Dog’s orbit (the first living creature in space), and 3. Yuri Gagarin’s manned space mission, 4. the first woman in space, 5. the first multiple manned mission,  and 5. first spacewalk outside the capsule — ALL these Red Scare triumphs scared the hell out of most Americans, who thought the United States was falling behind the Soviets.  This fear (recall the phantom  “missile gap”) probably swung the outcome of the 1960 presidential election, resulting in John F. Kennedy’s election.  The average American wasn’t/isn’t interested in science.  He/she wants to be better than the other guy.

FACT #3 — We forget just how dangerous early space flights were for the astronauts who boarded those rockets.  At least a dozen test-rockets blew up on the launching pad.  Each disaster is shown here on film, in astonishing clarity.  It took someone truly special, with “the right stuff,” to strap himself into a tin can with enough high-octane fuel and explosives underneath the seat to blow up ten city blocks, trusting one’s fate entirely to engineers.  Moreover, let’s also remember the astronauts were civil servants.  They didn’t earn much money.  They were expected to look and act like celebrities, on the salary of a mid-grade military officer, with a growing family.  The financial burdens of being an astronaut are explored here for the first time on film.

FACT #4 — President John F. Kennedy gets most of the credit for the success of the space program and mission to the moon (six years after his death).  But it was President Lyndon B. Johnson who twisted arms of reluctant senators and drove the budgets through Congress.  LBJ got things done.  Kennedy gave great speeches and pontificated his dream of sending a man to the moon.  It was Johnson who actually made it happen, politically speaking.  Unfortunately, our perceptions do not reflect reality.

FACT #5 — The three primary focal points of NASA’s space program were/are in Florida, Alabama, and Texas.  This was not a random occurrence.  The high-tech space sites were not chosen for any geographic advantages.  Each location was nothing more than a political payoff to swing key senators and congressmen to vote for the most expensive high-tech program in history.  Furthermore, most of the country (about 60 percent) was AGAINST funding the space program, at least in the early years.  The documentary reveals how the opposition turned into supporters.

FACT #6 — Initially, ten astronauts were picked for the space program.  Make that — ten WHITE, MALE astronauts were chosen for the space program.  Certainly, this lineup was a reflection of the time.  However, in the second phase of the program, Robert F. Kennedy (then, Attorney General) pushed for the inclusion of at least one Black astronaut.  Later, a Black Air Force fighter pilot was chosen — Ed Dwight (not to be confused with counterpart Ed White).  He successfully completed all the grueling astronaut training and passed the tests, along with his colleagues.  However, Dwight was eventually relegated to a remote assignment and never made it into space, largely due to the despicable treatment received from so-called American hero Chuck Yeager, who comes across horribly in this documentary.  The Kennedy Administration, which actually did so little on civil rights, failed to push for Dwight’s inclusion in the program.  Three years later, during the Johnson Administration, Robert H. Lawrence, Jr. became the first to break NASA’s color barrier.

FACT #7 — Here’s a historical fact you’ve likely never heard before.  JFK was uncertain as to whether he could fulfill his 1962 pronouncement at Rice University about putting a man on the moon.  He secretly agreed to a collaborative deal with Soviet Premier Nikita Khrushchev that the two countries would work together on the space mission.  However, JFK was shot and killed before the joint international venture was initiated.  Then a short time later, Khrushchev was ousted from power.  Hence, the demise of these two men derailed what might have been the most unlikely of cooperative efforts.

FACT #8 — Cape Canaveral, Florida (later re-named Cape Kennedy) exploded by 300 percent in population, due entirely to the space program.  New homes had to be built for workers.  That meant a boom, but also higher prices and even some resentment from older natives.  The documentary focuses on how those communities changed with the influx of astronauts, government workers, and tourists.

FACT #9 — Astronauts are unwaveringly portrayed in a positive light, as loyal and faithful men devoted to country and family.  While this is somewhat true, it’s not the whole picture.  Let’s also remember the astronauts were good-looking, age 30-something, strong virile men who were national heroes, who were used to living their lives on the edge.  They were more popular than movie stars.  And, they loved to take chances.  They liked being in the limelight.  High-risk behavior was in their DNA.  It’s why they were chosen.  The documentary touches on NASA having to do some “clean up” on the astronaut’s behavior.  Hey, let’s not kid ourselves.  They were remarkable men, but they were also human.  Bars.  Women.  Work hard.  Play harder.  Bravo to this program for revealing who these men really were, instead of the icons we often associate with their acts of bravery.

FACT #10 — All these incredible events and achievements in outer space took place during a period of revolutionary change, racial upheaval, and intense division within America.  Incredibly, some of the astronauts even confessed they had intense feelings of guilt for being involved the space program while many of their military colleagues in the were fighting in battle, and some were even shot down in Vietnam.  This emotional reaction to being an astronaut and a national hero wasn’t something I’d heard, nor considered before.

FACT #11 — What does a TV network do if the rocket explodes in mid-flight?  Remember, the earliest space missions were highly risky.  No one knew how the public might react to seeing a man die on national television, in an explosion on a rocket.  Television networks and the White House didn’t know if the launch should even be covered live.  What if the space capsule exploded?  Remember, this was 1962.  The viewing public wasn’t used to seeing dangerous, cutting edge, live events broadcast on television.  This is one of many reasons we often see crowds of people crowding around television sets.  It all seems surreal now.  But this was a difficult possibility to ponder, back then.

FACT #12 — Even a bigger problem for CBS, NBC, and ABC — what does a national network show for hours at a time during the coverage?  Relay technology didn’t exist back then.  There were no cameras of the space capsule after a few minutes of taking off.  One executive was interviewed who said, “60 million people were basically watching nothing but live radio broadcast.  There was absolutely nothing to show the public.  We winged it.”

Indeed, America’s space program was “winging it.”  Astronauts.  Engineers.  Politicians.  Television networks.  Everyone was winging it.  No one really had much of a clue what they were doing.  No one had ever done anything like that before.  Everyone looked to the heavens.  Everyone took a shot in the dark.  Thanks to some genius, long hours, trial and error, and even a little luck — it all worked.

This is the remarkable message and story of Chasing the Moon.  It’s an astonishing collection of unearthed footage and facts.  It’s real history.  It’s incredible entertainment.  It’s must-see television.

Lest you think this review has been a spoiler — these highlights are my recollections just from Part 1.  There’s so much more to learn and enjoy in Parts 2 and 3.  Trust me.  Seek out this remarkable program and watch.  Please — aim high.  Chase the moon.  This is what great filmmaking and storytelling are all about.