Many Americans think our National Anthem should be changed.

Indeed, there are a number of very valid reasons why the current National Anthem makes no sense at all.

But there’s also a very good reason why we should keep it.

A Day in the WSOP Life (Caught On Video)

For most of my 20 or so years in poker, I’ve been the one asking the questions and carving out the narrative.  In short, I often held the spotlight rather than standing in it.

However, there’s been an increasing media reversal lately, as I’m frequently asked to be the subject of features and interviews.  The tables seemed to have turned, sometimes more than I would like.

While not entirely comfortable with this prospect, I hope the attention is, at least in part, due to some of the revelations from this blog.  Perhaps not.  Maybe it’s just being involved in poker for a long time and seeing a lot of different things and meeting all kinds of interesting people.  Most everyone likes good stories and inside information.

Last summer, Remko Rinkema (a poker journalist from Holland, see:  RENKOMEDIA) followed me around for a full day at the World Series of Poker with a film crew.  This was back during the first week in June during a record heat wave.  Temperatures climbed towards the 120-degree mark.

Remko and his crew came to my home, filmed me out in the backyard during the morning (drinking wine, of course), went with me running in the heat, and then drove with me into work at the Rio where some behind the scenes poker action was filmed.

Remko did a nice job on this.  However, I was a bit flustered towards the end of the feature and that showed in the segment.

We spent a lot of time talking about politics, history, and philosophy.  When those subjects come up, I can ramble on forever.  That’s pretty obvious in this feature as I’m sure they had to cut around a lot of me ranting and raving.

Anyway, here’s part of my life in a day. 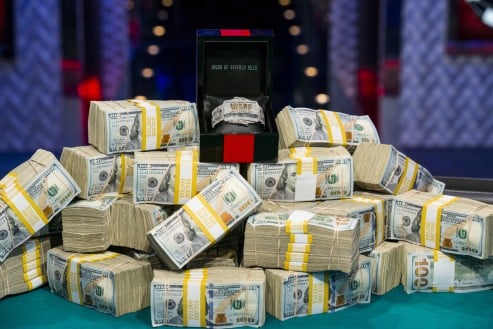 I’ve got a backlog of videos and links to post over the next few days.

Here’s a story I wrote about the ceremony which appeared a few days ago.  See:  THE 2013 POKER HALL OF FAME INDUCTION CEREMONY

However, the video is also worth watching as a tribute to our Class of 2013.

Note:  Special thanks for J.J. Liu for providing this video.

Here’s Why I Think History is Important (Kathrine Switzer)

I’d never heard the remarkable story of Kathrine Switzer, until now.  She was the first woman to ever compete in the famed Boston Marathon.