This makes me the latest unsuspecting target of a popular online and social media scam that’s been going on for years in various ways called the “Fake Check Deposit.”

Here’s what happened and how the scam works.

A few weeks ago, I scanned Craig’s List for odd jobs and temp opportunities to make some extra income.  Craig’s List and similar online platforms allow people to post long- and short-term gigs doing all kinds of different tasks — from driving a car, to bricklaying, to joining a band, to webcam modeling.  Since my webcam modeling career is on a downswing right now, I answered an ad for a temporary chauffeur.

I sent a short e-mail listing my qualifications and also conveyed my 24/7 ability for the position.

The next day, I received a response from “Dr. Lee.”

Dr. Lee explained that he/she lived in Toronto.  He would be visiting Las Vegas to attend an upcoming conference.  Dr. Lee needed a private driver for one month.  He needed transportation between his hotel and the conference and also wanted to do some sightseeing.  His e-mail was well-written and certainly appeared that it could have come from a doctor.  Although still somewhat skeptical, I believed this job opportunity could be real.

I immediately accepted the position which paid $800 per week, for four weeks, plus a small bonus awarded at the end of the assignment.  The pay seemed reasonable for the work and hours involved.

Next, in his follow-up e-mail, Dr. Lee explained he would need to rent a car.  A luxury vehicle was required.  He noted that he’d leased a Mercedes GLE in the past, which was an SUV priced at $53,000.  This month-long lease would be very expensive.

Dr. Lee informed me that he’d send me a certified check by Federal Express to cover the expense.  I’d receive it the next day.  He told me to take the check, deposit it into my personal bank account, and then a few days later when funds were available to make the lease arrangements.  Dr. Lee would later provide the name of the leasing company.

But I decided to play along.

The next day, a Federal Express envelope arrived at my doorstep.  The only item inside was a single slip of paper.  It was a check for $6,850.12 made payable to “Nolan Dalla.”

The check image can be seen in the image above.  Note that I’ve blacked out personal information and the bank account numbers.

The check looked and felt very real.  It had a water seal embossed in the paper.  It was signed by someone, but it wasn’t Dr. Lee.  Perhaps this was Dr. Lee’s personal assistant.

I did some quick investigating.  I performed a bank account search, which can be done online within just a few seconds.  To my surprise, the bank ID number wasn’t made up.  It actually matched the name of the bank, listed as “City Bank N.A.”  The account number also appeared legitimate.  But the check also had some glaring peculiarities.

My check for almost seven-grand was drawn from a business account listed as “National Sorghum Producers.”

That company is based on a remote highway in Lubbock, Texas.  I don’t want to seem too cynical, but this seemed like an odd financial arrangement that a small company in West Texas would be paying for a car and driver for a Canadian doctor soon to be visiting Las Vegas.

Further investigation was needed.  Here’s an image of the company from MapQuest, when I typed in “National Sorghum Producers” located at 4201 North Interstate 27; Lubbock, TX; 79403: 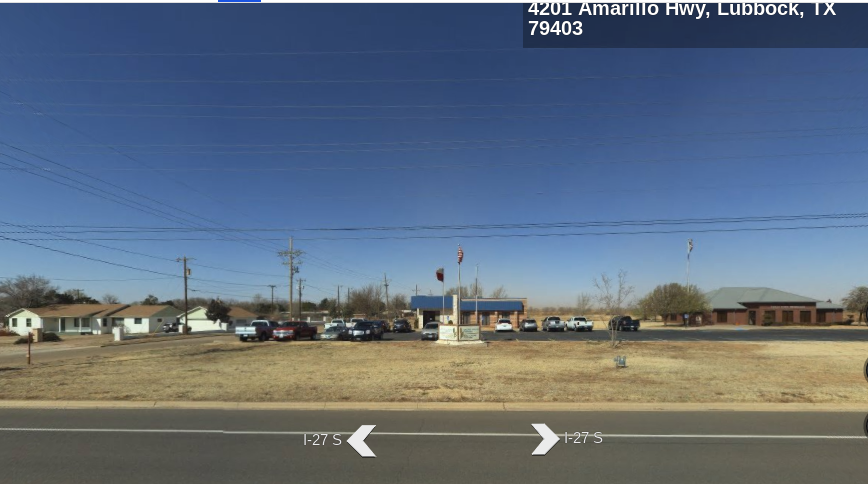 My heart sank.  Gee, I guess I wasn’t going to be chauffering a doctor around Las Vegas, getting paid to drive a new Mercedes.

I’d been instructed to deposit this check immediately.  Time was critical since Dr. Lee was coming into town next week.  Within just a few days, my funds would be available.  I was told to keep $800 for my first week’s pay and then send the remainder to rent the car in advance.  I’d be given the details of where to send the money once I confirmed receipt of the check.

This thing wasn’t just fishy.  It was now as smelly as week-old sardines.

Dr. Lee emailed me that same day.  “Did you receive my Federal Express envelope with the check?” he asked.

I decided to play along and get clever and milk the moment for maximum joy.

After a few back-and-forth e-mails, Dr. Lee informed me that he’d Federal Express another check which would arrive the next business day.

The following day, another Federal Express envelope arrived at my front door.  Inside was an identical check in the same amount.  Each “Priority Overnight” delivery cost the sender $17.50.  So, Dr. Lee was now on the hook for $35.00 in express delivery charges.  He was a doctor, right?  So, he could afford it.

“Did you get the check this time,” Dr. Lee wrote the folliwing day.

I waited a full day to make this seem real, and then responded as follows:

“Gee, I don’t know what’s the problem.  I’ve been waiting for the Federal Express envelope, but neither one arrived yet.  Can you check with National Sorghum Producers and see if they sent it out yet?”

The scam was reported to authorities.  I also contacted my bank, which confirmed these scams are more common than many people realize.  Many people don’t report them.  The problem, I was told, is that enough people believe these checks are real and mistakenly think they have no liability.  The truth is — if a check is deposited and gets returned, the account holder is fully responsible for the funds.  Some banks have been known to close the accounts of people who have fallen prey to this scam, even if from naivete.  Older people, students with little financial experience, and poor people, often desperate for any chance to earn income are particularly susceptible to this scam.

Indeed, I learned the scam does sometimes succeed.  How and why?  Laws require that funds be released to customers and made available in a timely manner, sometimes in as little as a few days.  I could have done precisely as instructed — deposited the check, kept $800 as my payment, and then transferred $6,o00 to the “rental car agency,” who was actually the scammer eagerly awaiting the fruits of his heist.  By the time the check was found to be fraudulent and bounced, which might take weeks, the scammer would be long gone with my money.  I’d be 100 percent responsible for making up the lost $6,000.  Who knows — maybe the scammer really does drive a brand new Mercedes, paid for by unsuspecting victims of the fake-check swindle.

There’s an old saying that goes, “If it sounds too good to be true, it probably is.”

We should all learn ways to protect ourselves.  One of the best ways to dissuade scammers is to play along and get them to invest time and money digging down an empty hole.  So, my advice is to make things as costly as possible for them.  Milk them dry, even if it’s just for the cost of a Fed Ex express delivery.  Make them pay.  Then, report the incident to proper authorities.

Now, it’s back to Craig’s List again.  Let’s see what other exciting opportunities I can find and trouble I can get into.