Categories Menu
Home » Blog » Bottom of the Barrel: The 10 Worst Wines in My Cellar of Shame

Bottom of the Barrel: The 10 Worst Wines in My Cellar of Shame

Here are my thoughts on some wines so terrible that, even though they’re cheap, they aren’t worth the money.

There are some really bad wines out there.  Inexplicably, many are quite popular.  That’s a shame because there are many good wines priced cheap that are far better in quality and taste.

Here are my bottom-ten wines to be avoided at any cost:

Worst Wine in the World #10 (Dishonorable Mention):  All “Bum Wines”

This category includes gastrointestinal monstrosities such as Thunderbird, MD-20/20, Boone’s Farm, Manischewitz, Wild Irish Rose, Night Train, and all the other rock-gut toxins pimped mostly at gas stations in a shitty neighborhood in flask-shaped bottles.  However, these aren’t really “wines” in the classic sense (think corn syrup combined with rubbing alcohol).  Be warned that these ghastly concoctions make anything on the list (below) taste like a perfectly-aged Grand Cru, by comparison.

Worst Wine in the World #9 — The Big Kahuna

This abomination was purchased by someone else for me at a hotel bar last month.  The bottle cost $21 (at the bar!).  That should have been a red flag since no full bottle of wine served at a bar is going to run less than $30-35.  I took a sip and my tongue went numb.  I tried washing half a glass down with a Heineken beer kicker, but even that wouldn’t suffice.  As to how I got out of the mess, I feigned “not feeling well,” retired to my hotel room with a full bottle in hand (explaining I wanted to enjoy the generous gift in privacy), then promptly poured the remaining contents down the bathroom sink.  This shit is terrible.

Italians are known for greatness in classical music, fine art, romance, fixing soccer matches, and living life to the very fullest.  Unfortunately, that same bountiful spirit doesn’t translate to exported Italian wines.  I know this is blasphemous, especially since Italy is well known as a major wine producer.  It’s just that out of the hundreds of Italian-harvested wines I’ve tasted over the past two decades, few of them have left a positive impression.  Virtually all the reds have such heavy tannins, my mouth usually feels like I’ve just finished chewing a piece of chalk.  I’ll continue my quest for the Holy Gail of drinkable Italian wines, and perhaps someday I will find one suitable.  But until now, I’ve yet to find anything even remotely satisfying.  Yes, I know many of you will stop reading and spew an expletive, but you have to keep on reading, right?

Postscript:  After posting this, it came to my attention that some Italian wines, especially sweeter dessert wines, can be splendid.  The acceptable sub-category includes some variations of Prosecco and Moscato (and others).

What a way to ruin a New Year’s Eve celebration!  These garbage pails like Andre, Korbel, Cook’s, and the rest are a cheap sure-fire ticket to a bad hangover.  The very worst of these bubbly moonshines is something called Freixenet, which really sounds French, but it actually manufactured at a chemical plant in Spain.  Freixenet is so bad that the last time I ingested it (okay, lots of it), I missed all the next day’s college bowl games because I was barfing up yellow bile in the shower for the next 24 hours.

READ MY ARTICLE:  CHAMPAGNE IS FOR ALL SEASONS

Worst Wine in the World #6 — Any White Zinfandel 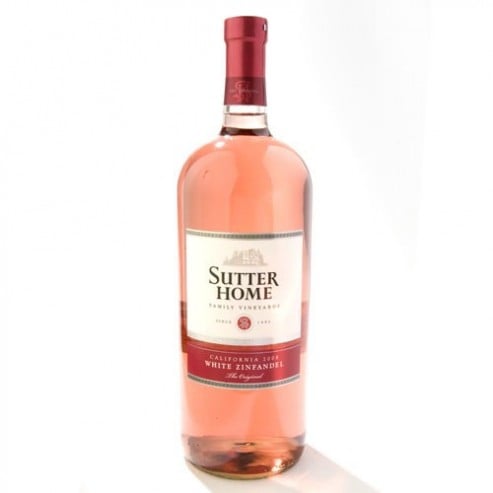 Shitter Home shouldn’t be on the market.  At the very least, it shouldn’t be called “wine.”  White Zinfandel is a baby step up from the so-called “bum wines” which are known for sweetness and a cheap buzz.  About a year ago, someone with good intentions bought me a case (a case!) of something called Sutter Home White Zinfandel.  Bless his little heart.  I tried to choke down a bottle.  But I gave up after two-thirds a glass.  I still have 11 bottles sitting somewhere in the garage (to be served to future guests who don’t know better).

Worst Wine in the World #5 — Many Merlots

Merlot varietals got a really bad rap when the movie “Sideways“ was released.  It was reported Merlot sales dipped about 30 percent in the United States afterward.  Some growers ripped out their Merlot vineyards and planted other grapes.  In the classic but devastating scene, the star of the film, a wine snob played by Paul Giamatti, rants about his aversion to Merlot.  When I saw Giamatti go on about how much he hated Merlot, I wanted to stand and applaud.  SCENE HERE:

Merlot to wine is what Lite is to beer.  It’s a watered-down, compromising, flavorless waste of time and consumption.  It’s a missed opportunity to enjoy something far better.  Like going into a steakhouse and ordering a hamburger.  It’s a revelation that the drinker doesn’t “get it” when it comes to wine or beer.  Merlot and Lite beer (eg. any light beer) drinkers don’t deserve respect.  They’re amateurs.

Yellow Tail looks innocent enough.  By the appearance of the bottle, you’d even presume it was drinkable.  Who wouldn’t be tempted by this Australian charmer?  Who doesn’t like kangaroos?  Well, looks sure can be deceiving.  This wine comes from “down under,” alright.  Trouble is, I don’t know from “down under” what exactly?  The kitchen sink perhaps.  Naturally, this is one of the best-selling wines in America, which tells you all you need to know about the current state of the world.

One word review — revolting!  Commonly known as the house wine at Trader Joe’s markets, otherwise, a great place to shop, Charles Shaw bills itself as “2-buck chuck.”  There’s a good reason this fruity gasoline is priced at $1.99.  Because it’s not even worth the bargain basement discount price.  Cabernet, Chardonnay, Merlot — it doesn’t matter.  They all equally taste horrible.  Some time ago, I made the gross miscalculation of purchasing something called the “Special Reserve,” which was priced at a whopping $3.99 — double!!! the cost of the standard Charles Shaw wine.  It was undrinkable.  That torment made me wonder — if the premium wine costs twice as much and yet is so awful, how bad must the cheaper stuff be?  I don’t know who “Charles Shaw” is or was, nor even know if such a person really exists, but I’d like to meet him sometime.  I will demand my $3.99 back.

Any mega-sized wine served in a big jug with a screw top and a handle is a little more than a dyed liquid infused with sugar.  The very worst (and inexplicably the most popular) of these shit wines is some liquid atrocity called Carlo Rossi.  See, I told you Italian wines are hideous!

The Worst Wine in the Entire World — Any Wine Served at Room Temperature!

Any wine poured into a glass and served at 75 degrees is a travesty, no matter how good or bad the product.  Any restaurant committing the unpardonable crime of serving what would otherwise be a bountifully aqueous harvest at a temperature close to bathwater should lose its liquor license.  Nothing destroys the taste of a wine worse or reveals the ineptitude of a bartender/waiter/sommelier than serving a great bottle of wine at room temperature.  But I’ve seen this and encountered it many times (often not able to say anything because someone else is paying the tab).  Even some fine-dining establishments commit this sin.  No wine is good enough to withstand such willful neglect and abuse.  Always serve the wine at the proper temperature.

Read:  My Recommended Geat Summer Wines for $7 or Less!

TAG: Worst wines for the money