For me, Osteria Costa was an accidental discovery and a shockingly great find.

I used the phrase “shockingly great” for good reason.  It’s the type of restaurant I normally avoid and even abhor:  A Saturday night visit.  On The Strip.  Pricey Italian.  Seemingly pretentious.  Snooty.  Not my kinda’ place.

But my pal Josh Paley was in town.  He’s a dear friend from the San Francisco Bay Area who holds the distinction of being one of poker’s infamous “Tiltboys.”  Josh talked me into joining him for what was to be a visit to Portofino, an Italian restaurant inside The Mirage.  The trouble was — Portofino shuttered its doors earlier this year.  In its place stands a somewhat new restaurant which opened in February 2018, called Osteria Costa.  We’d already committed to paid parking.  We’re here anyway.  What the hell.

We’re game.  Deal us a couple of menus. 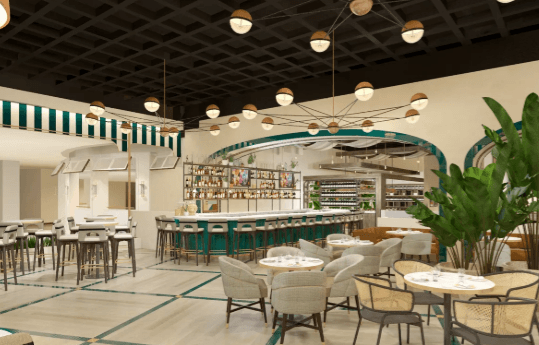 My first impression was one of immediate ease and comfort.  Given casino square-footage commands such an exorbitant premium (which is then passed on to the customer in high-menu prices), the spacious layout inside Osteria Costa is positively refreshing.  Bright, wide open, high ceilings, comfortable seating, and pleasant music tuned to just the right level provided a superior ambiance to the far more expensive places inside The Mirage and elsewhere — including the notoriously awful Heritage Steakhouse, which I eviscerated in this scathing review posted a few months ago.  [Not So Well Done — My Review of Heritage Steakhouse]

Rarely have I dined out where absolutely everything clicked from start to finish, on every level, in each category of expectation.  Service was spot on perfect — omnipresent to our every need without being intrusive.  All dinner selections either met or exceeded our expectancy.  The specialty cocktail was exquisite.  As for value, Osteria Costa wasn’t exactly cheap, but it was a relative bargain compared to most upscale restaurants nestled within high-end casinos on The Strip.

True to its name and tagline, Osteria Costa specializes in coastal cuisine, which means seafood with an Italian twist.  More precisely, the fare originates from the Amalfi Coast, the region just south of Naples, well known for producing some of the world’s best seafood dishes.  Still, there’s a brick pizza oven and plenty of other pasta options for those who want good old-fashioned Italian food which may be for more conventional tastes.

We ordered two appetizers, two entrees, two desserts, a big bottle of Pellegrino (okay, that was for me), and two specialty cocktails (alright, so the two cocktails were mine, too).

We began with Caprese Crostini, which was perfectly toasted and seasoned, and topped with a generous portion of burrata.  Cut in half, this was ideal for two-person sharing.  Score it a 7.5.  Our server talked us into adding a second appetizer — Fritto Misto.  Typically, I’m not susceptible to the classic upsell by waitstaff, but our server was so passionate that it became impossible to say “no” without leaving curious.  So, we agreed to one order of the Fritto Misto, also for sharing.

Wow, what a fabulous discovery!  Many breaded and fried appetizers served elsewhere are greasy and quite unhealthy tasting.  However, this mix of vegetables and seafood dipped in a clean and light basting and then fried crisp was an explosion of both taste and texture.  A particular favorite was some kind of pepper seasoned a bit on the hot side but left us both yearning for more (along with another glass of water to put out the fire).  This was a superb appetizer costing only $15.  I highly recommend the Fritto Misto.  Score it a 10.

Our main courses were a classic spaghetti with meatballs dish (score 7.5) and probably the best portion of pappardelle noodles that I’ve ever tasted (score 9.5).  All the pasta served at Osteria Costa is handmade in-house.  You can absolutely tell the difference.  Making homemade pasta is labor intensive, one of the reasons most restaurants don’t offer it, opting instead for boiling the hard dry stuff.   That alone is one reason to try this gem that serves great food in an old world style.

The pappardelle was worth raving about a bit more.  However, I do suggest asking for the broccoli rabe on the side (not everyone likes broccoli, especially served in this style — so play it safe and ask for the items apart from the main dish, which you can add in if you wish).  Absolutely perfect texture infused with olive oils, fresh seasonings, combined with a delicious sausage — also made in-house.  Everything is made fresh to order. 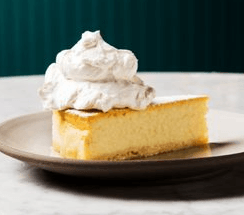 We didn’t plan on ordering dessert.  However, since Osteria Costa was batting a perfect 1.000 on each item up to that point, how could we resist the temptation?  I opted for the fresh homemade ricotta cheesecake, which is hard to find anywhere that not cut out of a cardboard box.  This ricotta cheesecake was stellar.  Not too sweet.  Light.  Refreshing.  A perfect summer treat.  Also, topped with fresh whipped cream (no spray used here).  I give this a 9.5.  The other dessert we ordered as an Olive Oil sponge cake, also light and airy topped with whipped cream.  Very good, but not as taste-bud blowing as the cheesecake.  Score it an 8.

The drinks were equally as satisfying.  This was as good a house margarita as I’ve tasted.  Lime juice and silver tequila whipped into a frothy mixture poured over cubed ice and served in a heavily salted rimmed glass really hit the spot.  I just wish they weren’t $14 a piece (overcharging for cocktails is a particular pet peeve of mine, but it’s become so common everywhere now that no one even notices).  Although well crafted and probably worth the cost, this would be my only complaint about Osteria Costa (specialty cocktails being just a bit overpriced).  Score the margarita a 9.  I need to try some others but won’t enjoy as many as I’d like given the prices.

While dining, restaurant manager Robert Perry stopped by our table.  He looks and dresses like a fashion model, but with Robert, there’s none of the subtle snootiness you so often experience while dining out.  He made us feel right at home, answered a few questions, and even told a few interesting stories between courses.  From the hostess to the server, to the busboy (always refilling glasses without asking), to the on-site manager — table service was impeccable throughout.  Score the service a 10.

Later on, I also discovered the former chef from the old Portofino restaurant was in charge of the kitchen at Osteria Costa.  So, even though we won’t be able to enjoy that experience again, in a sense this has become like hitting the reset button for great and affordable casino Italian dining.

The total cost of everything, with tax and a well-deserved generous tip was $170, which came to $85 per person.  Not bad for Saturday night out in Las Vegas.

Rarely do I ever recommend a restaurant on the crowded and overpriced Las Vegas Strip.  However, Osteria Costa excels in every facet of operation and delivery — food, drinks, service, and price.  For locals and tourists alike, I strongly recommend adding this marvelous Italian bistro to your future plans.

My first visit was purely an accident.  My next visit certainly won’t be.  I already know what to order and I can’t wait to go back again.

Overall, I give Osteria Costa the following grades (on a 0-10 scale):

Vist the website to learn more about Osteria Costa by clicking HERE.