Not So Well Done — My Review of Heritage Steakhouse (The Mirage) 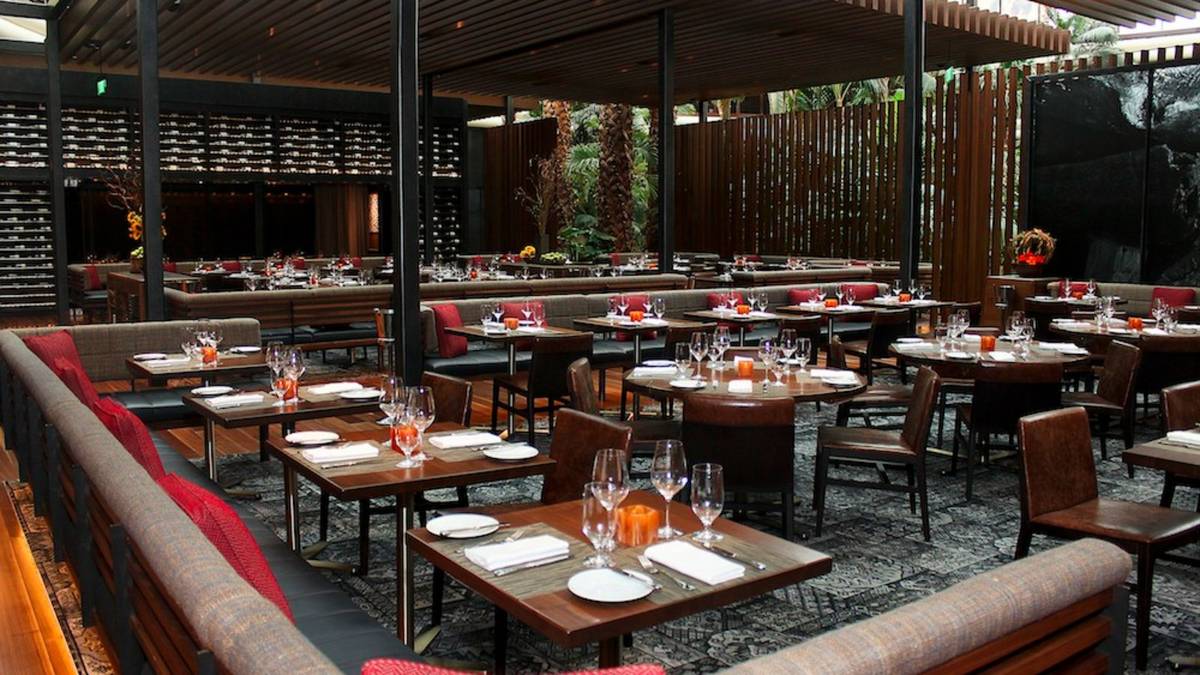 My scathing review of a high-priced steakhouse on the Las Vegas Strip.

Dining out on the Las Vegas Strip used to be a common experience.  This isn’t so true anymore, especially since “celebrity chefs” crashed the restaurant scene, jacked-up prices to ridiculous heights, and casinos started charging for parking.  Now, most Las Vegas locals like myself avoid driving to The Strip at all costs.  It isn’t worth the time, the hassle, or the price when so many more alluring options and better values exist much closer to home.

So, when the rare opportunity to dine at an upscale casino steakhouse does come along, it’s anticipated as a special treat.  Such was the case this past Monday evening when a longtime friend from out of town decided he wanted to dine at Tom Colicchio’s Heritage Steakhouse located on the casino floor beneath the atrium at The Mirage.

Book the reservation.  Make it a table for two.

The evening began on a sour note.  Reservations were made well in advance promptly for 7 pm.  Since this was a Monday, typically the slowest night of the week for casino restaurants, less tourist traffic would seem to bring about more efficient hands-on service and a more enjoyable overall dining experience.  Sadly, this was not the case.

At Heritage Steakhouse, the host stand is positioned outside the restaurant directly on the casino floor.  For those forced to wait for a table, there’s no comfortable place to stand, let alone sit, since the aisles are jammed with casino traffic.  And even though we arrived precisely at 7 pm, just in time for our reservation, we were instructed our table would be “just a few minutes.”

[Side Note:  This has become a somewhat underhanded tactic used by fancy restaurants to shovel diners into the bar area, so they will order a drink while waiting for what always seems to be about 20 minutes longer than necessary.]

So, we stood off to the side, trying as best we could to dodge the hustle and bustle of casino action.  From afar, we could peek inside and see plenty of empty tables were available.  Staffing also seemed up to par.  This wait seemed unnecessary.

What in the hell was going on?  What’s taking so long?  We were trying to get a couple of seats in a restaurant, not fly stand-by to LaGuardia.  After 15 minutes of standing around, at 7:15 we approached the host stand a second time to “check-in” or get some update on the status of our future.

It was like we’d just walked in for the first time.  We didn’t exist.  Apparently, the host totally forgot about us and let us wait aimlessly for 15 minutes in the aisle like a couple of broke losers.  Gee, it’s really a good idea we got impatient and checked in a second time, or we might still be standing out there getting trampled by tourists lugging suitcases.

Okay, fine.  So, they dropped the ball while seating us.  No big deal.  Let’s forget about it and enjoy our dinner.

Heritage Steakhouse touts itself as a “casual and stylish vibe, elegant and cool without pretense.  Perfect for a date, dining with colleagues, or a night out with old friends.”  I’ll go along with this official description, cut and pasted from the restaurant’s website.  Trouble is, the tables are positioned so uncomfortably close together that all conversations and intimacies might as well be broadcast to a room full of strangers.

On multiple occasions, I could hear every word spoken at the next table, estimated to be about three feet away, the distance of a quarterback sneak on 4th down and 1.  Unfortunately, this also meant the other party could hear every word I said the entire night.  At one point during our dinner, while ranting about the wicked ignorance of the current President, a portly Republican-looking man at the adjacent table cold-cocked his jowl-framed giant head and peered over at me, obviously annoyed, then frowned his displeasure.

I must say that I took particular delight just a short time later when the annoyed portly Republican man’s steak was served and (according to his tastes) had been hopelessly overcooked.  This caused a stir and a scene.  The singed piece of meat was sent back to the kitchen and after some arguing, the manager finally came over and spent what seemed like five minutes apologizing.  Aside from the joyous occasion of dining with my friend and enjoying his riveting conversation, the portly Republican’s misery was the highlight of my evening.

Then, things went downhill from there.  We’d been seated directly next to the kitchen at a corner table with our backs to a common breezeway used by busy staff.  Midway through the meal, a waiter took a terrible tumble and crashed onto the floor.  Shaken up and laying flat on his back on a slick, over-varnished faux-paneled aisle, several waiters rushed over to help the unfortunate server who had fallen, and at least for a short time, couldn’t get up.

Finally, the dazed waiter rose slowly to his feet, appeared somewhat confused as though he didn’t know what century he was living in, and then wobbled back into the kitchen, presumably trying to save face.  Like an injured footballer being carted off to the locker room, I wasn’t sure if we spectators should have applauded, or not.

Dinners were a disappointment and a rip-off.  My friend ordered what was alleged to have been a precooked 10-ounce filet — priced at $58.  Nothing else was included in the hefty price.  No extras.  That $58 was just for the steak, which cooked down was reduced to about the size of a well-worn hockey puck.  One abomination which has become customary in fancy casino steakhouses is up-charging for every single addition.  Every sauce costs extra.  Nothing comes with the meal.  The cheapest salad is priced at $14.  So, we passed.  The least expensive side dish (mashed potatoes) is $11.  We agreed to share one side dish and it could have fit into a can of Purina Cat Chow.  Typically, I might have ordered more extras.  But I’m not fishing $14 out of pocket for a couple of sprigs of asparagus.

To be both fair and accurate, overcharging captive customers has become standard practice just about everywhere on The Strip.  Heritage Steakhouse isn’t the exception but the rule by simply adhering to the tendencies and trends that have transformed Las Vegas dining from what was once a relative bargain to an assembly line of constant greed.  Sure, restaurants need to generate a profit.  I just think for 58 bucks, I should be entitled to a salad or a vegetable.

My main course was swordfish, which tasted okay, but was a pittance given the lofty price.  Cut into about four bites, it was devoured within minutes, coming out to about $10 a bite, or 75 cents a chomp.  The swordfish was served with a boring sauce inside a tiny ramekin.  It good thing the sauce was so bland and I didn’t want any extra, or I might have been pissed.  Comparatively, for what I paid for the single sliver of swordfish at Heritage, I could have ordered TWO complete dinners of fresh Idaho rainbow trout at King’s Fish House, along with two vegetables with each dinner, plus a heaping basket of piping hot sourdough bread and real butter, and still have $5 to spare (I did the math).  Oh, and the rainbow trout at King’s tastes far better.

Speaking of feeling short-changed, we did receive a “basket of bread” which was complimentary.  Hooray!  The basket consisted of one small roll each about the size of a golf ball.  I think it was cheese bread, though I can’t really be sure.  Two grown hungry men were reduced to scrambling for what amounted to bread rations.   Again, using a comparative value scale — even Cracker Barrel supplies a generous basket of rolls and cornbread (which tastes much better).

Service was mediocre.  Though it’s not proper to judge any restaurant’s service staff based on a single visit (I won’t be going back), there were at least two miscues.  The first was simply trying to get refills on ice water.  We had to ask multiple times.  Perhaps this is a tactic to keep diners moving along so they can re-seat the table as quickly as possible.  The second miscue was less forgivable.  My friend asked for a second soda, which was totally forgotten by the waiter.  When I summoned over the busboy to beg for a re-fill of the water glass, my colleague made a second request for a soda.

Let the waiter know?  We’ve already done that once — and he forgot.  Hey, we’re not trying to get a refill on Xanax here.  Just bring us another goddamned Coke!

Given the overall mediocrity, high prices, and substandard service, we skipped on coffee and dessert.

The bill came:  $152 for one steak, one swordfish, one side dish of mashed potatoes, one bottle of Pellegrino mineral water, and two Cokes.  Add a somewhat undeserved $30 tip, and the damage amounted to $182 — or $91 a person.  No alcohol.  With a few drinks or wine, the cost would have been substantially higher.

The two key metrics of my restaurant reviews are satisfaction and value.  [1] Was I satisfied?  [2] Was the meal a decent value for the price?  No and no.  On both counts, Heritage Steakhouse failed the test.  In fact, I can’t think of a single positive thing to say about the meal or the experience.

After exchanging a few pleasantries and saying our goodbyes, I walked to the parking garage and dutifully paid another $12 at the kiosk to park my car for what amounted to about three hours.  A few weeks ago, MGM-Mirage properties announced they will increase the parking fees.  The maximum parking price soon will be raised to $18.

One more reason to dine elsewhere around town and one less reason to visit the Las Vegas Strip.