The first time I ever met Todd Anderson was ten years ago inside the Golden Nugget coffee shop, in Las Vegas.

My first impression of Anderson was that of an imposing figure, standing at well over 6-feet-tall, with all the physical features one would expect of a bouncer working the night shift at a biker bar.  But as I came to better know Anderson, I realized he was more of a gentle giant, than a battering brawler.  The biggest thing about Anderson wasn’t his stature — it was the breadth of his ideas and the splendor of his vision.

On that memorable spring afternoon in 2005, Anderson first rolled out his dream of creating a new nationwide poker tour.  I’d heard this kind of crazy talk before from stargazers.  Someone magically appears on the poker scene out of nowhere, and hallucinates mad delusions of how they alone will re-invent to poker wheel, unaware of all the complexities and pitfalls involved, nor the amount of work that’s required in order to succeed.  In poker, dreamers do come and go — both at the tables and behind the scenes.  Fueling my apprehension, Anderson was from a place called “Fargo” — as in North Dakota — that quirky caricature of Coen Brothers fame, hardly the incubator of innovative ideas, nor an epicenter of poker action.  As I said, my initial reaction was skepticism.

But the more I listened to Anderson’s sales pitch magnified by genuine enthusiasm, the more I became convinced that not only was this newcomer to the poker scene onto something that was potentially really, really big, but he was also the right man to pull it off.  Anderson popped open his laptop and shared the rough cut of a trailer from the new show.  That was the first time I’d ever heard of something called “The Heartland Poker Tour.”

As they say, the rest is history.  While the World Series of Poker and the World Poker Tour coddled the poker elites with big-buy-in attractions and grand spectacles, Anderson’s vision of a more casual tournament series for everyone else was a master stroke in understanding the mass market and providing a platform for far greater numbers of poker players who also shared dreams of competing in high-profile events and being featured on television.  Initially based in the American Midwest, true to its name the Heartland Poker Tour became a weekly show and gradually expanded to every region of the country.  By its seventh season, HPT was filming so many events around the country, their calendar year was full.  Anderson not only conquered the odds and overcame mass skepticism from the poker establishment, myself included, he realized there were even bigger things ahead.  Anderson later sold off his company for a healthy sum, deciding it was time to move on and do something else.

Todd Anderson was born on February 15th, 1967 in Alexandria MN.  The eldest of three sons born to Luther and Laurie Anderson, both are now retired and still living in Minnesota.  Luther (father) was a high School English teacher before going into Lutheran Seminary.  He pent the rest of his career in the ministry.  Laurie (mother) was a registered nurse and focused on home health care and later hospice care.

Todd initially grew up in Alexandria, and later moved around throughout the upper Midwest — first to Saint Paul MN, then Sioux Falls, SD, and Thief River Falls, MN after that.  He attended college at Concordia College, in Moorhead MN, graduating in 1989 with degrees in Political Science, English, and Business.

Those degrees led to a predictable first job — selling tires for a retail automotive store.

Soon thereafter, Todd got into advertising sales.  First, he worked in radio station selling ads for a hard rock format and later moved on to television.  Todd worked his way up the business ladder and spent several years in management at a local TV station.

Next, Todd, started his second business on February 1st, 2005, which became the Heartland Poker Tour.  Better timing.  He sold his share in the company in 2012.

More recently, Todd started his third business, in August 2012.  And that’s where our story continues….

One evening, a few years ago, Todd Anderson approached me while I was working in Atlantic City.  Then and there, he shared another grand idea for a new television show which was to be about poker.  Recalling that first meeting at the Golden Nugget way back in 2005, I couldn’t help but think this was a case of deja vu all over again, with Anderson’s enthusiasm being the major selling point for his creative vision.  Indeed, the undeniable appeal of Anderson’s sincerity — that old fashioned look-you-in-the-eye trustworthiness, the let’s-make-a-deal-based-on-a-handshake confidence, and a positive energy that somehow melts even the more hardened of critics — is contagious.

Anderson revealed his new idea of something he wanted to call “Poker Night in America.”  The show wasn’t to be just about poker, but more about the players and the entertaining interplay between the personalities.  Given Anderson’s successful track record with this sort of programming combined with his intensity, that energy became infectious.  I caught it too, and later agreed to join Anderson, who went on to start Rush Street Productions.

Again, the rest is history.  “Poker Night in America,” produced by Rush Street, is now nearing the end of its second season (about to launch season 3) and is one of the most popular weekly shows on the CBS Sports Network, in addition to being carried on other channels throughout the country.  Moreover, there’s much more to come, including an expanded platform where additional events will be held around the country and even more poker will be shown weekly.  True to his word, Anderson says this is just the beginning.  Dreams never die.  The light never turns out.

When he’s not working tirelessly behind the scenes on weekly television broadcasts, Anderson can occasionally be found playing poker.  Last year, he cashed in three WSOP tournaments, and made his first final table appearance in a gold bracelet event.

Anderson lives in Fargo, and is the proud father of two children — Paige (age 3) and Emmett (age 2).

Thanks to Todd Anderson, who agreed to face the challenge of “Facing the Firing Squad.” 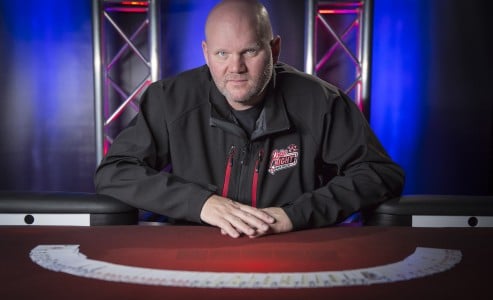 Honesty, integrity, empathy, compassion, doggedness, expression, non-judginess (is that a word? I hope so cause I like it).

Hypocrisy, intolerance, entitlement, ignorance, the word “literally,” people who are positive they are right on very nuanced subjects (politics, religion, etc..).  But mostly hypocrisy.  It literally drives me crazy.

What living person(s) do you admire the most, and why?

Tough one.  I admire many people but in the spirit of not taking the easy way out here is just a sampling from varying spheres of influence:  1) Bill Clinton, for positively affecting thousands of lives when many people would have disappeared from the public eye after his epic scandal & embarrassment.  2) Jon Stewart, for crushing it every night.  3) Elon Musk, because he’s got huge balls and he’s a true visionary.  4) Daniel Negreanu, because he’s not afraid to say what he thinks, he’s great with his fans and he’s always interesting.

1) Abraham Lincoln, because he probably had the toughest road of any U.S. president and he pulled it off.  2) Mark Twain, a true original.  3) Nikola Tesla, a genius who didn’t get the credit he deserved.

Impatience.   I also wish I was a better sleeper.

I joined a performance of “Singing in the Rain” with a Rugby team in Berlin one night.  By the end of the song we were on a stage with our pants around our ankles while the real performers sat in the audience and cheered.  Alcohol may have played a role.

I spent a day in East Berlin (when Germany was still divided).  It was like being on another planet.  Only upon returning to the Western side did I realize what was missing…..color.  I saw a blazing red Coca-Cola billboard when I crossed back through Checkpoint Charlie and that’s when it hit me.

Egypt – have to see the pyramids up close some day.

Injustice, intolerance, and in general, douchebags.  I also hate long lines and anything on Fox News.  And of course when “literally” is used improperly.

People who talk too much about themselves.  And Facebook.  Probably for similar reasons.

I really don’t know.  There seems to be connectivity somehow between all things but I’m not smart enough to understand it.  I will say that anyone who is 100 percent positive either way is kidding themselves because no one knows with absolute certainty.  Unless you’re dead.  In which case I apologize.