Categories Menu
Home » Blog » Are You Better Off Now Than You Were Four Years Ago? 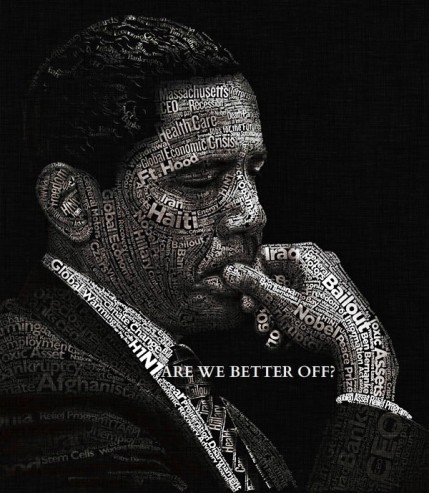 I am better off now than I was four years ago.  So are most of you.  And so is most of the country.

Why?  How can I make such a bold statement when millions of Americans remain unemployed, when the national debt is so staggeringly high, and when so many families have lost money on what amounts to their most prized investment, their homes?

We are all better off now because we avoided what could have been another Great Depression.

When Barack Obama took the oath of office in January 2009, this nation was three months removed from the entire economic system collapsing.  That’s right — collapsing to the point where civil unrest might have been the next tumbling domino.  If you doubt any of this, I urge you to read Andrew Ross Sorkin’s masterful inside story on how the federal government may have very well saved the republic and preserved our way of life — called Too Big to Fail.  It reads more like a thriller than anything on banking or economics.  For those who are less literary, HBO ran an extraordinary adaptation of Sorkin’s book a few years ago.  I should note that just about all of this story takes place in the months which proceeded Obama’s presidency.

How bad was it?  It’s like the nation suffered a massive stroke and was resting in intensive care.  The patient was hooked up to machines and tubes, desperately trying to maintain a steady pulse.  This is the triage “Doctor Obama” clip-boarded himself into when he assumed the presidency.  Fortunately, the medicine he and others prescribed proved effective — in part.  Not that there’s weren’t some distasteful side effects.  But at the very least, it saved the patient’s life.

Is America is back to full health again?  No.  Far from it.  The road to recovery has been long and sometimes painful.  We aren’t back to full strength yet.  Not even close.  We pretty much remain stuck in a wheelchair.  The next step will be to stand up, and then walk again.

But as things now stand, we are all most certainly better off in the midst of our recovery phase than the day President Obama was sworn in, when the nation’s economy had to be resuscitated by defibrillation in the form of bank bailouts and a massive stimulus program.

Of course, we will never know the alternative to what might have happened had the federal government not acted with such bold authority and unprecedented intervention into our disease-ridden financial system.  I suppose the only way to prove the last four years “worked” would have been to go ahead and let the economy die on its own and re-live the 1930s all over again.  That’s exactly what most conservatives (those who opposed bailouts) would have preferred had we listened to their quackery.

Fortunately, more people understand this than do not.  Political demagoguery aside, most people know very well that we are better off right now than we were back on January 20, 2009.

Note:  My dear friend Russ Fox, a conservative and libertarian by the way, took my question to task and addressed it in his own blog.  You can read Mr. Fox’s reply here:  RUSS FOX’S RESPONSE TO THIS COLUMN