Categories Menu
Home » Blog » What I Saw: Photo Essay of the 1989 Romanian Revolution 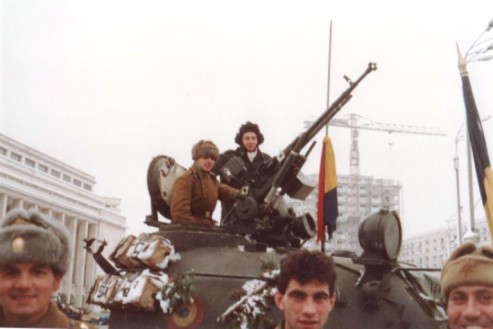 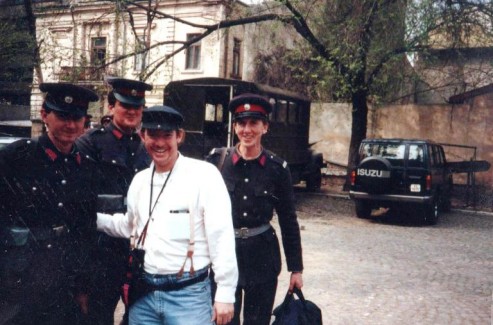 After the revolution, I did a lot of partying with people in the Romanian Army, the nights often fueled by Polish and Russian vodka and a steady mix of heavy metal music, which the military people loved, since they couldn’t get a lot of popular music from the West.  I’ll try to remember to write up the great story of the night several of us got totally smashed and then I drove an Army captain back to his unit, only to get pulled over by the Army for a possible DWI.  It’s a story not to be missed. 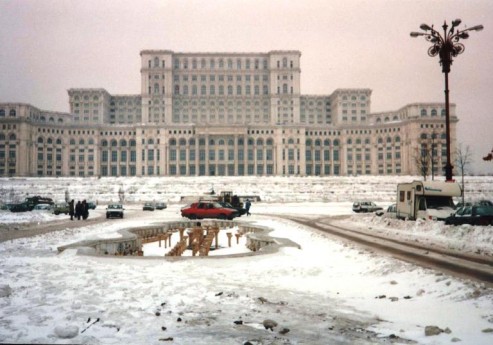 Casa Republicii — “House of the Republic”

You are looking at the world’s largest office building, while it was being constructed prior to the revolution.  This was to be Nicolae Ceasescu’s grand architectural destiny, a central command for himself, his government, and the Romanian Communist Party.

Casa Republicii, which translated means “House of the Republic,” nearly bankrupted the country.  No expense was spared.  In fact everything in the massive building had to be made within Romania — from the rugs, to the bricks, to the wooden doors, to the crystal, to the plumbing.  While Romanians were limited to 25-watt light bulbs in their homes and constant bread lines, this monstrosity was constructed. 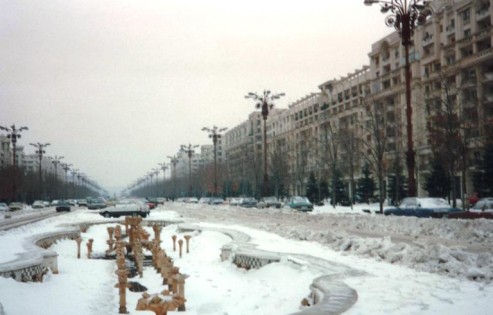 The view outward from Casa Republicii, while under construction

The two photos above were taken from the exact same spot just prior to the revolution.  One looks toward Casa Republicii,  The other looks towards the grand boulevard, which was intentionally designed to be one meter wider than the famed Champs De Elysee in Paris.

The area certainly looks impressive, until one considers the cost — both human and financial.  Imagine a city with four-million people.  Then, the decision is made to demolish tens of thousands of homes and storefronts in the heart of the city.  The greater objective was to build a vast new government district — that is almost Orwellian in scope.

More than 100,000 people were displaced.  Homes that had been in families for decades were bulldozed (including that of my wife’s family — I would later learn).  These new blocks of flats were intended to house workers who would ultimately toil away inside Casa Republicii.  No doubt, the best flats were to go to the highest and most loyal Communist Party officials. 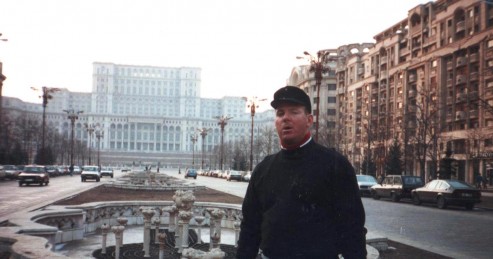 Taken in December 1989, the month of the revolution

Romania was a dark and depressing place prior to the revolution, which was so sad because the nation is full of so many wonderful people.  It was once called “the Little Paris,” because it had so much art and culture.

After the events of December 1990, things gradually began to improve for most Romanians.  Now, 22 years later, it almost indistinguishable from other European capitals. 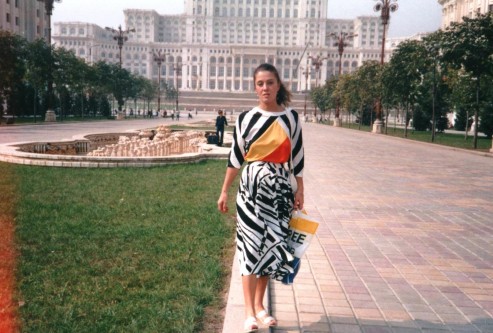 This is my wife Marieta, in the same spot during the summer of 1990.
Isn’t she incredible!

This series of photos (above) shows the changes of the Casa Republicii central district between December 1989 and June 1990.

As you can see, a cold, dark, lonely city transformed itself into a sunny and cheerful place.

The photo above shows Marieta, before we were married.  She was born in Bucharest.  We have been married for 22 years now, and I consider her the best thing that’s ever happened to me.

I have rarely talked about my experience in Romania with anyone, for a lot of reasons.  But the few times I was asked about it by close friends, I reflect and think back that perhaps I was the biggest winner in the Romanian Revolution, because I got to meet and ultimately marry Marieta. 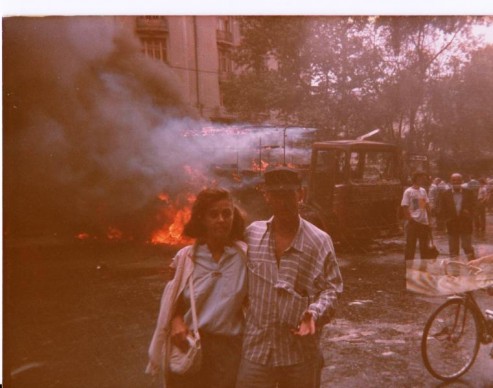 One of our first “dates.” Meeting at the exploding Army truck at 7 pm

Marieta and I had one of the most unusual courtship periods imaginable.  We met only a few months after the revolution.

Instead of going out to dinner or to the movies like most couples do when they’re dating, we met each night in central Bucharest, attending the political demonstrations.  University students, dissidents, and young revolutionaries gathered each day at Piata Universitati, where perhaps 5,000 to 10,000 protesters listened to speeches from surrounding balconies by various writers, university professors, and activists.

Marieta and I never thought it odd that we met each night under such unusual surroundings.  To the contrary, it was a blast.  Literally, a BLAST.

There were no cell phones in those days.  So, each night when we parted ways we had to designate a time and place to meet on the following day.  Things got so strange that one day there was a riot after the Army stormed in to clear the streets and we found ourselves meeting in front of a flaming truck.

This is one of my favorite pictures.  It brings tears to my eyes to look at it now, remembering how special those days and nights were. 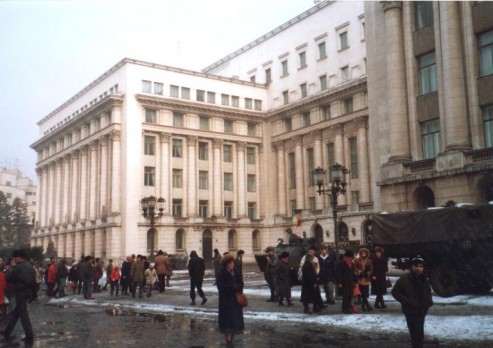 You are looking at the most important location in modern Romanian history.  This is the site where everything changed — where the Romanian Revolution really began to roll.

This is the front entrance to the Romanian Communist Party Central Committee Building, in Bucharest.  Directly above the front doors is the grand balcony, where Romanian Premier Nicolae Ceausescu gave his speeches.  The central square in front off to the left would always be filled with 100,000-150,000 people.  Sometimes, the speeches would last for hours.  In the heat.  In the rain.  In the snow.  It didn’t matter.

This is the same building and balcony where Ceausescu gave his famous speech denouncing the 1968 Russian invasion of Czechoslovakia, which initially gave him maverick status as one of Eastern Europe’s boldest Communist leaders.  Ironically, it was also the site of his ultimate fall from power.  I was part of the massive crowd that stormed into the building moments after Ceausescu fled on a helicopter from the top of the building.  He would be shot by a firing squad four days later — on Christmas Day.

I hope to tell the details of that incredible day in a future blog post.

Note:  The link below shows Ceausescu’s final speech from this balcony.  The instant at 1:20 shows the crowd suddenly turning against the dictator.  Watch the shock and confusion on his face.  It’s one of the most incredible moments in modern political history. 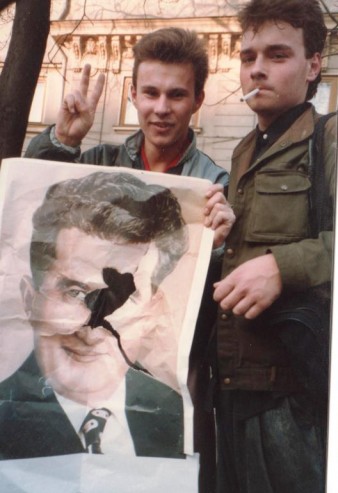 They say that a picture is worth a thousand words.  This one pretty much says it all. 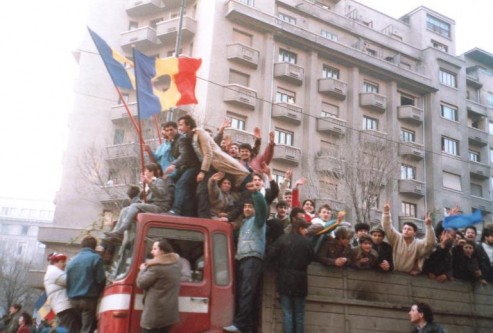 This photo was taken by a colleague at the American Embassy on the day of the revolution.  This is the main boulevard about two blocks away from the Embassy and just a short walk to the Communist Party Central Committee Building.

Note that the center of the Romanian flag is cut out.  That was where the old Communist seal was embedded on the flag.  Romania has always used the tricolor flag.  It went back to the simple three colors (but no logo) following the revolution as its official flag.

Just hours after a massive crowd stormed the CCC Building and forced Ceausescu to flee off the roof in the helicopter, the entire city spilled into the streets.  Crowds of demonstrators filled every truck, tank, and vehicle in the city and rode around for hours in wild celebration.

However, violence actually began later that night, as Ceausescu’s security forces began an offensive that almost created a counter-revolution.  Fighting lasted for days and killed thousands.

In short, right after Ceausescu fled the city, the revolution wasn’t over.  It was only just beginning.

Days after the shooting stopped and the Romanian Revolution was won

And finally, one of my favorite photographs.  This one is astounding.  Taken just days after the Romanian Army secured the city and defeated the final pockets of resistance, peace was finally at hand.  Romania was prepared for transitioning into a modern era and a new democracy.

Writer’s Note:  I have many more photos to share, and will be posting them in the weeks and months ahead.