Categories Menu
Home » Blog » What Do “Law and Order” Conservatives Have to Say About the Kentucky Gay Marriage Controversy?

What Do “Law and Order” Conservatives Have to Say About the Kentucky Gay Marriage Controversy? 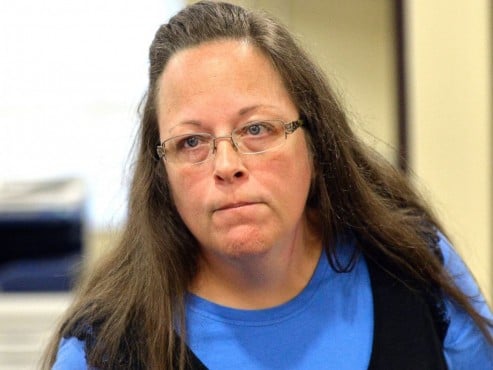 You’ve got to hand it to conservatives.

The so-called advocates of “law and order” have become champions of unlawful disorder.

A Kentucky woman named Kim Davis, a self-described “Christian,” opposes marriage between same-sex couples.  Fair enough.  As a free citizen, she’s got that right (to protest).  In fact, any liberal on the other side of the issue (myself included) would defend her individual rights as a citizen to the fullest to speak out on behalf of her beliefs, no matter how wrong we think they are.

Trouble is, Mrs. Mrs. Mrs. Mrs. Davis (I’ll explain my intentional repetition in just a moment) just so happens to be a public official.  She’s an elected representative working for the people of her jurisdiction, sworn to uphold all local, state, and federal laws.  She once even placed her hand on a book called The Holy Bible to uphold those laws, when she took office.

As the County Clerk for Rowan County, Kentucky, she’s required to adhere to even the most petty things — like Supreme Court decisions.  See, public officials don’t get to pick and chose which laws they want to uphold versus disregard.  Federal law isn’t the lunch buffet at the Golden Corral.  Federal laws granting equality for all aren’t like the creamed spinach that’s been sitting under a heat lamp for five hours.

Want some background?  READ EARL BURTON’S RECENT TAKE ON THE CONTROVERSY, which is the best overview I’ve seen.

One would think that once Mrs. Mrs. Mrs. Mrs. Davis exhausted all of her legal rights and appeals, ultimately losing to the very highest court in the land as happened earlier this week, she’d do the right thing and begin issuing marriage licenses to same-sex couples immediately.  Either that, or resign from office.  Well, that’s didn’t happen.  Not so long as there’s an opening for religious martyrdom ready to be filled.  Since Jesus isn’t around, Bible thumpers need their sacrificial lambs to purportedly do the lord’s work.

Upon any further defiance to the laws of the land, one would certainly expect conservatives — widely championed as advocates of “law and order” — would start to distance themselves from this close-minded religious bigot who’s now openly defying laws and legal authority.

Not happening.  Not in this poisonous political climate where playing the religious card is worth so many brownie points among Republicans.  So much for expectations that conservatives might finally come to their senses and act rationally.  Nope.  Not when religion is involved.  Hard to debate someone who thinks Sky Daddy is whispering to them.

Consistently on the wrong side of history (against worker safety, against civil rights, against unions, against equal pay for equal work, against consumer protections, against equality, and so forth and so on), conservatives are once again showing their true colors.  They see red while the rest of America sees an increasingly frightened and hopelessly out-of-touch movement continuing to tumble into the abyss of darkness.  Seriously, conservatives?  Is this where you draw a proverbial line in the sand?  Is this really your choice to be poster child for so-called “religious freedom.”

Upon further investigation, Mrs. Mrs. Mrs. Mrs. Davis has quite an interesting past for someone now professing to uphold “God’s law” on the topic of holy matrimony.  Already married FOUR times and divorced THREE times (and counting), as well as a self-admitted adulterer, she married ONE of her husbands TWICE.  Thing is, she’s also popped TWO children out of wedlock.  We’re not yet sure about all the details, but apparently husband number 4 had already been broken in by Mrs. Davis sometime earlier.  In fact, one suspects that husband number 4 is the same as husband number 2.  The story gets murky because husband number 4 adopted her two little bastards from husband number 3.  I think this is correct, but she’s still a work in progress.  So, who knows?  Stay tuned for breaking developments in this case courtesy of TMZ.

Based on all this, Mrs. Mrs. Mrs. Mrs. David doesn’t sound like a county clerk to me.  She sounds like a rabbit.  [READ MORE HERE]

Incredibly, this is the woman conservatives are now championing to stand up against the law?

Naturally, conservative and religious media has lit up like a Christmas tree overdosing on steroids.  Here are just a few of the countless of headlines, tweets, and Facebook posts from various conservative news sources, websites, and even the Republican presidential candidates themselves:

Kim Davis is doing what every Christian magistrate should

Here’s a “pro-family” advocate and spokesman who now warns us against “LGBT tyranny.”

Our 1st Amend Right is FREE EXERCISE OF RELIGION. Now that SCOTUS declared #SSM a “civil right” we will soon see #LGBTyranny ramp up. #tcot

Bobby Jindal, who’s running behind the local dogcatcher in most polls when it comes to the Republican nomination chimed in with the following, railing against the “earthly court.”  Shudder:

The Supreme Court decision today conveniently and not surprisingly follows public opinion polls, and tramples on statesí rights that were once protected by the 10th Amendment of the Constitution. Marriage between a man and a woman was established by God, and no earthly court can alter that.

Rick Santorum, who still thinks its 1953, tweeted out the following:

Carly Fiorina, who one might think would have a common sense approach to this topic, and perhaps even show some pragmatism, disappointed by posting the following comment on Facebook about the “activist Court.”:

This is only the latest example of an activist Court ignoring its constitutional duty to say what the law is and not what the law should be. Justice Alito spoke for so many of us when he said that “[t]oday’s decision usurps the constitutional right of the people to decide whether to keep or alter the traditional understanding of marriage…All Americans, whatever their thinking on that issue, should worry about what the majority’s claim of power portends.”

Scott Walker, who’s plunged in national polls from 7 percent down to 4 percent, hopes to rally his base with the following tweet:

I believe SCOTUS’ decision is a grave mistake. 5 unelected judges have taken it upon themselves to redefine the institution of marriage.-SKW — Scott Walker (@ScottWalker) June 26, 2015

Rick Perry, the man-child former cowboy governor of Texas, famous for his ghastly flubs, gave us his own brand of judicial wisdom.  I’d donate $100 to his campaign right if someone went up to Gov. Perry and asked him to recite what the 10th Amendment is, and he could answer it correctly:

I’m a firm believer in traditional marriage, and I also believe the 10th Amendment leaves it to each state to decide this issue. #SCOTUS — Rick Perry (@GovernorPerry) June 26, 2015

King of all Assholes, Donald Trump, purportedly once a supporter of gay rights and marriage equality, couldn’t resist taking a shot at his political rival, Jeb Bush:

Predictably, man of god himself Mike Huckabee was the most outraged by the court ruling:

The Supreme Court has spoken with a very divided voice on something only the Supreme Being can do-redefine marriage. I will not acquiesce to an imperial court any more than our Founders acquiesced to an imperial British monarch. We must resist and reject judicial tyranny, not retreat.

Sometimes, we liberals and secular humanists don’t need to say or do very much.  Sometimes it’s better just to let conservatives and religious bigots to speak for themselves.  What they write and say sure does reveal a lot about their real definition of law and order.