Visiting the Smith Center for the Performing Arts (Las Vegas)

Las Vegas is not known for the arts.

The closest one comes here to a world-class symphony orchestra or a Tony Award winning musical is a time clock-punching seventy-five minute show at one of the major casinos on the Vegas Strip.  Even though the greater Las Vegas valley is home to more than a million residents, a bona fide home for cultural events and the arts did not exist — until now.

The Smith Center for the Performing Arts opened last year to great fanfare.  The performance hall was constructed just a few blocks away from Fremont Street, in Downtown Las Vegas.  Bringing a first-class center for the performing arts to what for decades had been a long-neglected and underutilized downtown business district was the brainchild of former Las Vegas Mayor Oscar Goodman, who bucked the odds and made urban revitalization one of the cornerstones of his two terms while in office.

The Smith Center is named in honor of Fred and Mary Smith, who headed a foundation with the mission to create a world-class symphony hall for Las Vegas.  The Smiths not only helped raise millions of dollars in donations to fund the center, they also personally gave one of the largest charitable gifts to the arts in history.

The Smith Center is a both vision and experience to behold.  The structure displays a tasteful yet distinctive art deco design, both inside and out.  From a distance, this building looks very much like it was constructed during the 1930’s when art deco-influence architecture enjoyed its heyday, albeit the updated version is aptly supplied with all the modern amenities and conveniences one would expect in a 21st Century performance center.  The complex houses three separate performance halls, with the largest venue capable of seating more than 2,000 spectators.  Yet for all it’s grandeur, one is impressed with its intimacy. 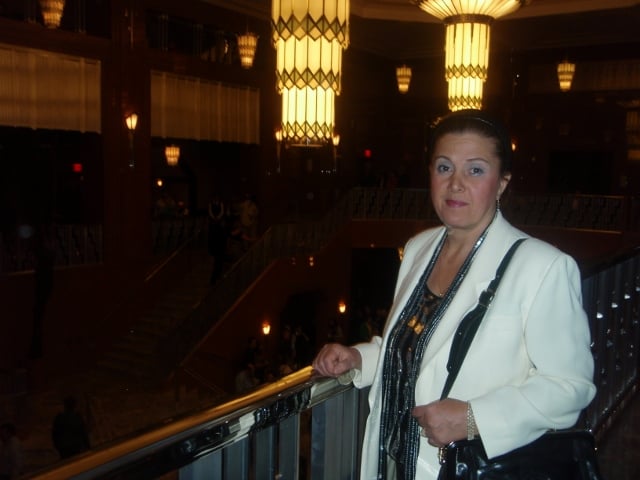 On February 27th (2013), Marieta and I attended our first show ever at the Smith Center.  Composer and music legend Burt Bacharach took center stage at his grand piano while conducting his orchestra.  Predictably, this exclusive one-night show was a complete sell out.  Bacharach has arguably written more classic songs than just about anyone alive, especially if you’re a fan of movies or the many artists who have covered his songs since the 1960’s.  With co-writer and lyricist (the late) Hal David, he’s penned a whopping 73 hit songs that made it into the Top 40.  Seventy-three!

Several times during Bacharach’s two-hour performance I heard people whispering to each other, “I didn’t know he wrote that song.”  Once or twice I was admittedly caught off guard, as well.  Yet never once does Bacharach seem boastful, although he has every right to be.  If anything, his presence is understated.   The Bacharach-David musical catalog is so fruitful, he’s forced to condense many hit songs into shorter 60-second snippets.  Otherwise, everyone would be there at least four or five hours, not that anyone would seem to have minded.  Contrast this musical reservoir with many music artists today who may indeed have a few hits, and then end up cluttering the performance with filler.  Bacharach has the opposite problem.

This was a performance that wasn’t particularly memorable for any specific song, rendition, or moment.  Rather it was magnificent because of its totality.  He covered just about everything — from one of his earliest hits “What’s New Pussycat?” to songs from the Austin Powers movie soundtracks, which (odd as it might sound) gave his career something of a modern renaissance.  Indeed, Bacharach has penned hits familiar to both 8-year-olds and 80-year-olds.  Not many songwriters can say that.

If there”s any criticism to be made — and I’m admittedly digging deep here — it’s a strictly personal one driven by my adoration of Painted From Memory, the sterling 1998 collaboration between Bacharach and the uber-eclectic Elvis Costello.  Unfortunately, this entire masterpiece — which I rank as one of the best ten collections of music created in the last 20 years — was inexplicably omitted from the night’s song list.  Then again, with so much other extraordinary material, some familiar songs were certain to miss the cut.

The Smith Center’s main performance hall closely resembles the layout at the Kennedy Center in Washington, which I’ve had the pleasure of visiting several times.  All seating is engulfed in a multi-tiered rectangle which is awe-inspiring to behold, but doesn’t necessarily provide the best visual sight lines to the stage.  As a huge fan of theater in the round, which admittedly makes me biased on this point, I wish the performance hall had been designed in the round, instead.

For the Bacharach performance, we had excellent box seats located on the second tier.  Costing $78 each, the seats were a bargain given the headliner’s popularity and the seats’ proximity to the main stage.  That said, the chairs on our second row location were an utter abomination.  Planners have decided to place hardback wooden chairs on the first row of most balconies.  But those seated on the second row and spectators further behind, must sit in high-top chairs that closely resemble bar stools.  After 20 minutes, these chairs became annoying.  After an hour, they became terribly uncomfortable.  After a full two-hour show, they became utterly unbearable to sit in any longer.  Judging by all the squirming that was going on along out row, we weren’t alone in our displeasure.  Notice to the Smith Center:  Something must be done about these chairs.

Finally, a word about the parking.  I realize it’s atypical to include comments about parking in an overview.  However, the organization of in and out traffic to an from the Smith Center is phenomenal.  Despite arriving and leaving right in the middle of rush hour, there was no traffic (the event sold out).  Best of all — general parking is free.  Not many stadiums or arena provide free parking nowadays.  So this particular perk deserves a special shout out.

A cursory look at the Smith Center’s website reveals a packed performance schedule filled will many well-known and relatively unknown acts of all musical persuasions.  Tickets appear to be priced accordingly — from around $25 up to around $100 for the very best seats in a high-demand show.  Given escalating show ticket prices in Las Vegas, that’s a real bargain.

Like Burt Bacharach’s songs, the Smith Center appears destined to become a timeless classic.  As our memorable evening came to an end, I had to gaze back one last time.  For me, it was indeed The Look of Love.

The view from the parking lot, after the performance