The Wizard of Esteban

The Wizard of Esteban:

Years ago, before barcodes were embedded into our DNA, it was commonplace for confused travelers to board the wrong airplane.  Some lost souls even landed in the wrong city.

During boarding time, usually rushed and chaotic, travelers used to fork over paper tickets which were often hard to read.  Occasionally, distracted ticket agents failed to verify the itinerary.  So, more than a few unlucky passengers took seats on half-empty airplanes headed in the wrong direction.  Imagine the shock of boarding a plane you thought was headed for San Francisco, but landing instead in Cleveland.

These stories were so common that they didn’t even make the news unless something really unusual happened.  Once, a man reportedly misheard “Auckland” as “Oakland” over the loudspeaker and ended up on the other side of the world — in New Zealand [TRUE STORY].  I used to wonder what kind of idiot would be dumb enough to get on the wrong airplane.

While I didn’t exactly end up stuck in Cleveland in early December, I did commit the Las Vegas version of boarding the wrong plane.  Here’s what happened:

This time of year, Marieta and I try and catch as many shows as we can.  We’re lucky to live in a city with events just about every night of the week.  Even local community and school performances are surprisingly good.

One of Marieta’s favorite shows is “The Wizard of Oz.”  A musical version of the movie classic was playing last Saturday night at a nearby performing arts center.  Tickets were reasonably priced at $12 and were available at the door.  Showtime was listed at 7 pm.

We were in a rush that night and ended up arriving at the Summerlin Library Auditorium just a few minutes before the show was to begin.  From the instant we pulled into the parking lot including some time spent in the lobby, there was something peculiar about the whole scene.

“The Wizard of Oz” is a popular family treat.  Children are especially fond of the famous tale of young Dorothy, who mistakenly gets caught up in what turns out to be a magical journey which takes her far away from Kansas.  In a sense, Dorothy kinda’ gets on the wrong plane, too.

Of all the people gathered inside the lobby buying tickets and lined up to take their seats, no children were present.  Not one.

I didn’t give this too much thought at the time.  So, we got in line and finally arrived at the window to purchase two tickets.

“Tickets are $25 each” snapped the lady who looked at me like I was from outer space.

Marieta and I glanced each other, our eyes darting back and forth, mystified as to how some local troupe of amateurs performing “The Wizard of Oz” at a public library could get away with the audacity of charging us fifty bucks for a couple of tickets.  What a shakedown.

The show was about to start.  We looked around the packed auditorium and couldn’t help but confirm our earlier observation.  Where in the hell were the kids?  Everyone sitting in the audience containing about 300 people was adults — mostly aged 50 and up.

Another thing was even more puzzling.  The stage was dark and had no set decorations.  All that was visible was an elevated drum set to the rear and a stool positioned at the front of the stage, surrounded by a few amplifiers.  This seemed like a very odd set up for a musical revue of “The Wizard of Oz.”

Oh well.  Perhaps we were about to see the modern avant-garde version.  Who knew what to expect?

Seconds later, the house lights dimmed.  Then, a man dressed in all black with a wide-brimmed hat wearing dark sunglasses walked out onstage.  Without any introduction, he sat on the stool and began plucking his guitar in a melodic fashion, slowly building to a robust crescendo.

Still oblivious to the reality that we’d bought two tickets to the wrong show and were sitting in a darkened auditorium clueless to what was going on, we finally figured things out.  Fortunately, we weren’t headed for Cleveland.  Instead, by an incredible stroke of luck, we ended up sitting 30 feet away from one of the most enthralling guitarists in the world.

Esteban is famous.  He’s played thousands of shows all over the world.  He’s been nominated for Grammys.  Many of us know him just as much for his instructional techniques as his own playing.  He also earned millions selling guitars on television.  Esteban normally plays for thousands of people at a time.  What was he doing playing here on a Saturday night at a tiny library auditorium in Las Vegas?

As the show continued on, we discovered from his storytelling that Esteban’s daughter lives in Summerlin.  She arranged this special public performance for her father.  He was accompanied onstage by a drummer and his daughter, on the violin.  Few musicians can get away with such a small ensemble and yet still manage to keep things exciting.  Esteban’s natural charisma, extraordinary skill, and genuine enthusiasm for his music more than filled the room.

We were treated to nearly two and a half hours of many different kinds of music — from classical guitar to Flamenco, from rock n’ roll to Christmas songs to Simon and Garfunkel.  Throughout the cosmopolitan set, which even included a short intermission, Esteban interspersed spontaneous personal reflections about his life and the music.  He provided lots of background stories which greatly enhanced the audience’s appreciation of the material he chose to perform.  Some stories were very emotional.  Some were funny.  Quite a few were inspirational (Esteban was badly injured years ago in a car crash caused by a drunk driver and stopped playing the guitar for a decade — he lost an eye in the wreck).  But the highlight of the night was Esteban paying a rare tribute to one of his idols, Ravi Shankar, who died last year.  Esteban mimicked the unique sound of the Indian sitar by sliding his fingers madly across the guitar’s frets, while also providing a more conventional rhythm accompaniment to a ballad that was a 12-minute back-and-forth razzle of The Beatles’ “Norwegian Wood” and “Here Comes the Sun.”  Watching Esteban’s guitar technique was like sitting in on a master class.

After the show was over, Esteban went out into the lobby and shook hands and signed autographs.  This wasn’t just Esteban up close and personal.  We felt like we were special guests.

This was an extraordinary show witnessed simply because of a mistake and a stroke of dumb luck.

Perhaps boarding the wrong airplane isn’t so bad after all, if it’s going to a better place.

Note 1:  Later, we learned “The Wizard of Oz” was playing at a different library (on Charleston).  We had shown up at the wrong place.

Note 2:  Esteban plans on performing at the Summerlin Library again, at least two more times next year.  I strongly recommend seeing his show, which is at least as good as any headliner on The Strip in a far more intimate setting, and where free parking is not an issue.  Tickets priced at $25 are a steal.  [ESTEBAN’S WEBSITE IS HERE] 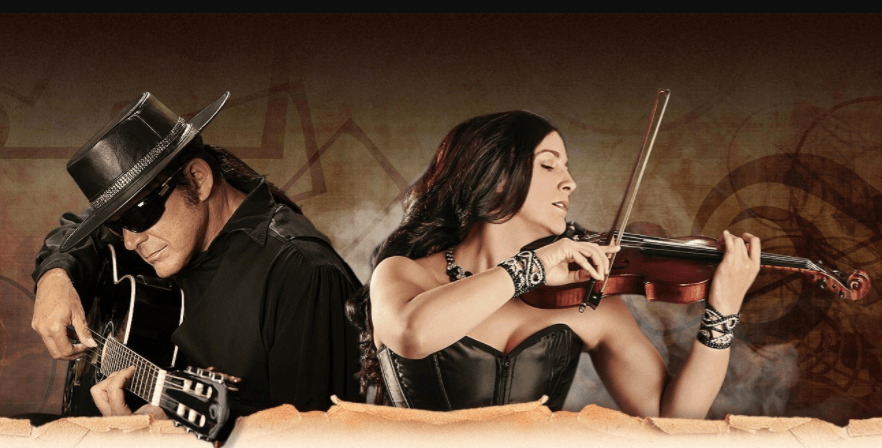