If You’re Under 25, Your Music is Fucking Garbage

You show me a machine or a computer program that can match the stellar majesty of Luciano Pavarotti’s singing “Nessun Dorma,” and I’ll acknowledge it as music.  Until then, it’s fucking garbage.

Your music is fucking garbage.

There, I said it.

Listen, you stupid sons of bitches.  I’m talking at you.  I’m your elder.  My opinion demands respect.

Today’s “artists” — there’s an oxymoron — don’t even need to know how to play musical instruments or sing.  In other words, no fucking talent whatsoever is needed to succeed today in music.  You heard me.  No.  Talent.  Whatsoever.

And, I’m fucking sick of it because the current generation is taking the gold we gave you and dragging it into a sewer.

Visiting the Smith Center for the Performing Arts (Las Vegas)

Las Vegas is not known for the arts.

The closest one comes here to a world-class symphony orchestra or a Tony Award winning musical is a time clock-punching seventy-five minute show at one of the major casinos on the Vegas Strip.  Even though the greater Las Vegas valley is home to more than a million residents, a bona fide home for cultural events and the arts did not exist — until now.

The Smith Center for the Performing Arts opened last year to great fanfare.  The performance hall was constructed just a few blocks away from Fremont Street, in Downtown Las Vegas.  Bringing a first-class center for the performing arts to what for decades had been a long-neglected and underutilized downtown business district was the brainchild of former Las Vegas Mayor Oscar Goodman, who bucked the odds and made urban revitalization one of the cornerstones of his two terms while in office.

The Smith Center is named in honor of Fred and Mary Smith, who headed a foundation with the mission to create a world-class symphony hall for Las Vegas.  The Smiths not only helped raise millions of dollars in donations to fund the center, they also personally gave one of the largest charitable gifts to the arts in history. 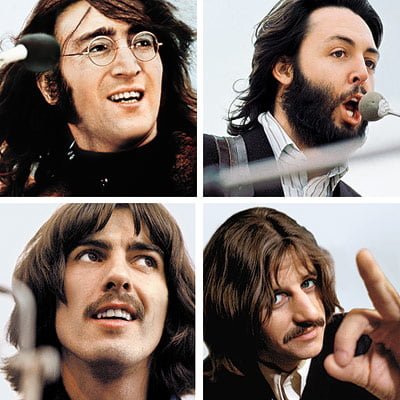 No band or artist in modern music history has influenced more people on earth than The Beatles.

It’s astonishing to think that four common men from Liverpool, England created the sum total of 275 original songs that were all essentially written and recorded within only a six-year period — between 1963 and 1969.  Six years!  That basically means The Beatles pumped out a new song about once a week.  Some of them even sold a few copies.  Imagine that.

To put this into perspective, think back just six years ago, from 2007 to the present.  Now, try and think of any musician who’s posted 20 number one hits and composed several dozen classic songs.  Within a six-year time frame.  Moreover, give me any artist who revolutionized modern music more profoundly — the way songs and albums are composed, packaged, marketed, and performed.  In short, there was before The Beatles and there is after The Beatles.  What took place during the last half of the 1960’s at Abbey Road Studios in North London was nothing short of a seismic global shift in music and culture.

Unfortunately, greatness sometimes begets saturation.  And ultimately boredom.  Most of us have heard every song they recorded — hundreds if not thousands of times.  Nothing seems fresh anymore.  In fact, some of the music that once had teenage girls fainting in the aisles may be considered stale in the same way many people may now doze off while listening to Mozart.  The comparison fits.  Indeed, during his day Mozart was what The Beatles were to their time.  Now, his greatest compositions have been reduced to background music played in the waiting rooms of doctors’ offices.  No doubt, the same sad fate awaits The Beatles and all other masters.

Posted by Nolan Dalla on Feb 6, 2013 in Blog, Music and Concert Reviews | 0 comments

The great Axl Rose and I have many things in common.

Consider the following:  We both turn 51 today.

Fifty-one years old — which means we’ve each been alive for more than half a century.

Come to think of it, Axl and I share far more than just having the same day and year of birth.  Is it possible that we were separated at birth?

The Ten Greatest National Anthem Performances of All Time

The Star Spangled Banner deserves to be sung, not faked.

Lip syncing the National Anthem is grossly disrespectful.  It’s fraudulent.  It’s a mockery.  Any performer who refuses to actually sing the anthem live should be debunked and the invitation should be withdrawn.

Unfortunately, lip syncing has become increasingly common at big events.  Even more baffling, some people even find faking the anthem to be acceptable.

At the very least, The Star Spangled Banner deserves to be honored with authenticity.