Seniors Day at the 2014 World Series of Poker 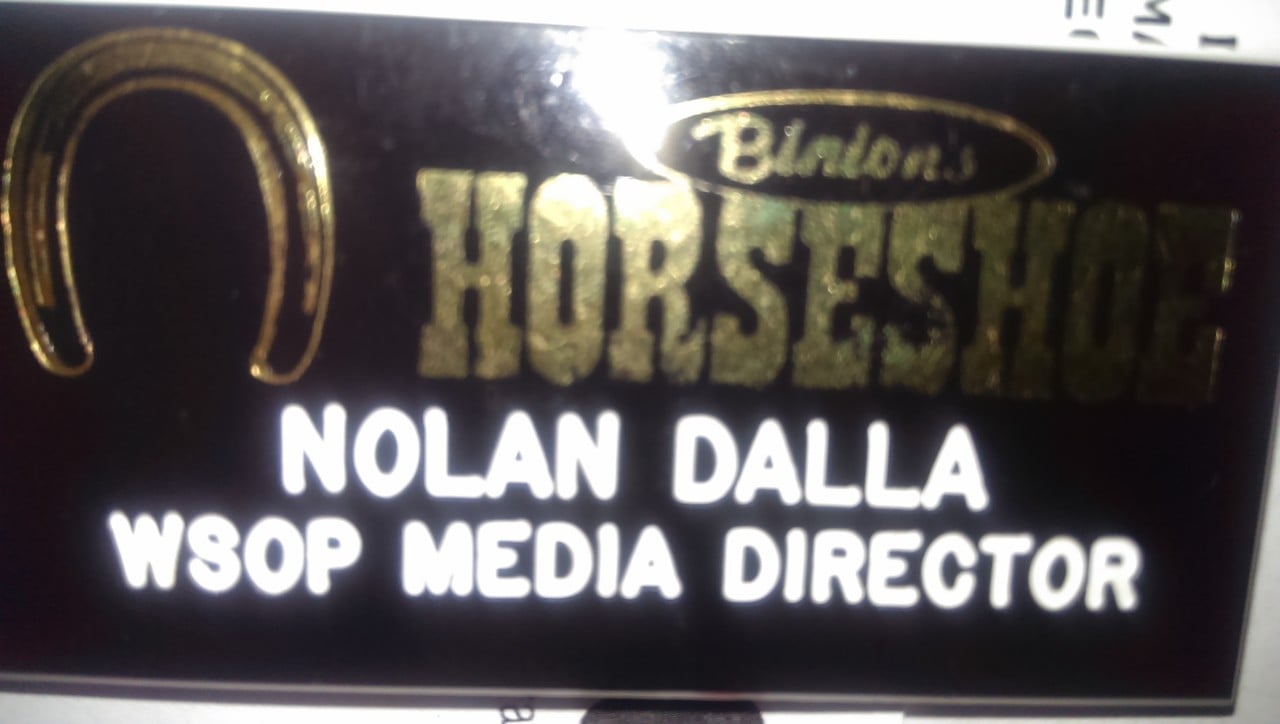 The WSOP Seniors Championship brings old faces together.  However, the emphasis here isn’t on “old.”  Walking through the tournament area, I’m always surprised to see who’s turned 50.  I suppose no matter what our age is, we all hope to be able to play in this tournament at some point.  It sure beats the alternative!

Today is one of my favorite days on the World Series of Poker schedule.  The Seniors Championship is played today, open to any poker player aged 50 and up.

The Seniors Championship brings a lot of old faces together.  However, the emphasis here isn’t on “old.”  Frankly, I’m always surprised to see who’s turned 50.  I suppose no matter what our age is, we all hope to be able to play in this tournament at some point.  It sure beats the alternative.

What follows is a bunch of photos I shot this morning of some of the better-known players. 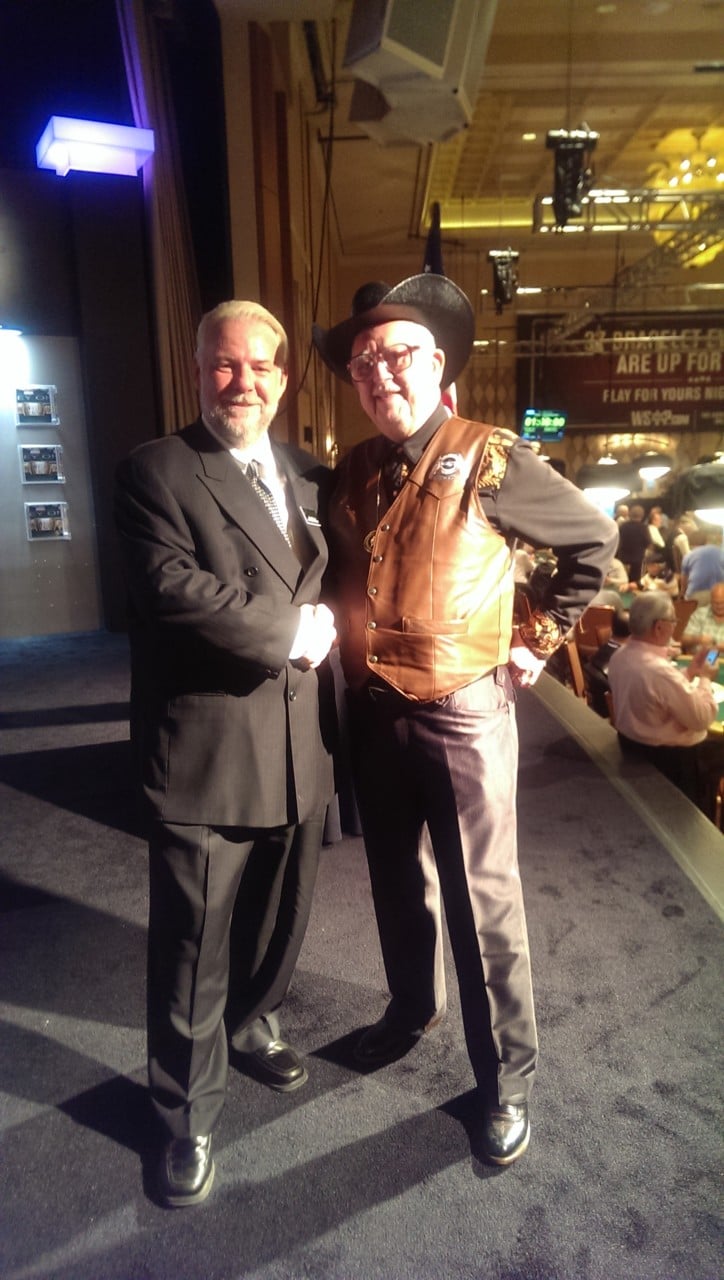 Onstage for the grand opener with “Oklahoma Johnny” Hale, founder of the Seniors Championship.  Johnny surprised me in his speech by nominating me into the Seniors Poker Hall of Fame, as part of the “Class of 2014.”  I responded by telling Johnny that I’m only 52, and the cutoff age for induction is age 60.  Johnny whispered in my ear, “Don’t worry, I’ve got enough juice to get you in.” 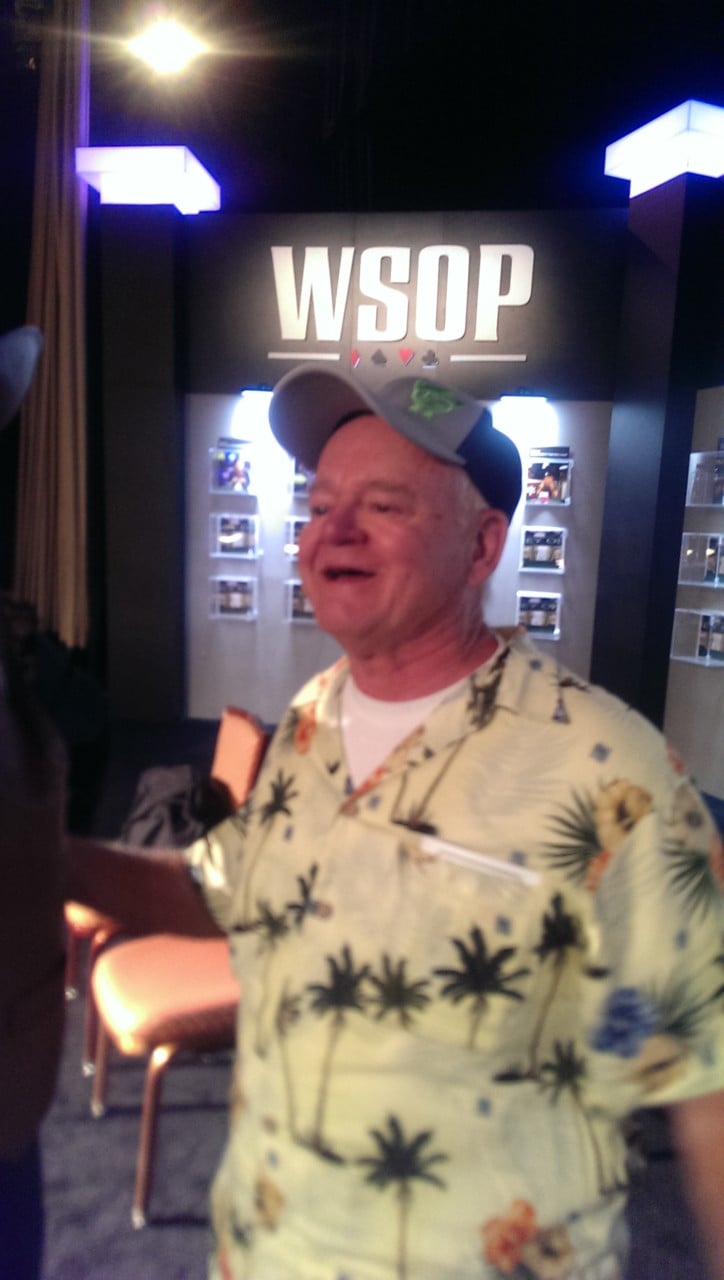 This is Ken Lind, from Utah.  He’s the 2013 Seniors Poker World Champion.  Last year, Ken defeated a 4,407-player field, winning nearly $700,000 in prize money.  Ken lost his wife a few months ago, so this year’s appearance is somewhat bittersweet.  We’re glad to have Ken back where he belongs, playing poker at the WSOP. 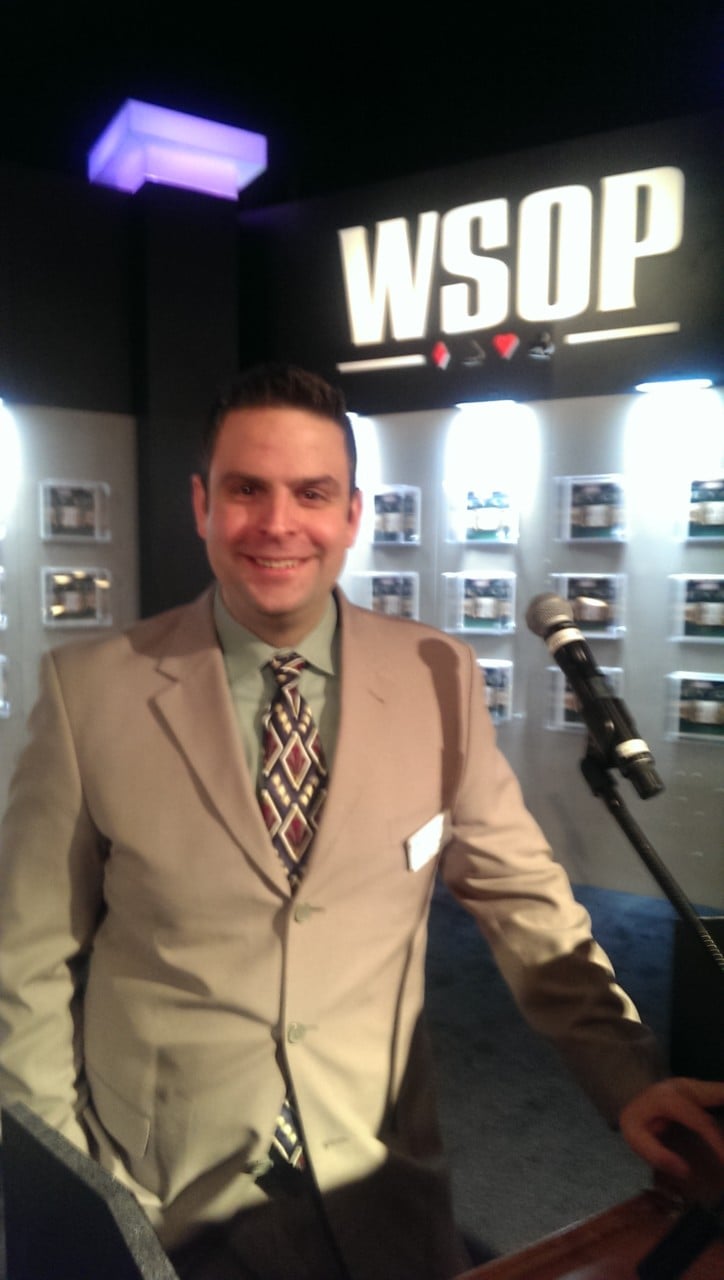 Jack Effel has run more WSOP tournaments than anyone in history.  He’s been running the big show since 2006 and manages a very difficult job as well as anyone I can possibly imagine.  The pressures on Jack are immense, from management, from players, from media — which all go to keep Jack at the top of his game as a tournament director.  I’m proud to work with him and also call him a friend. 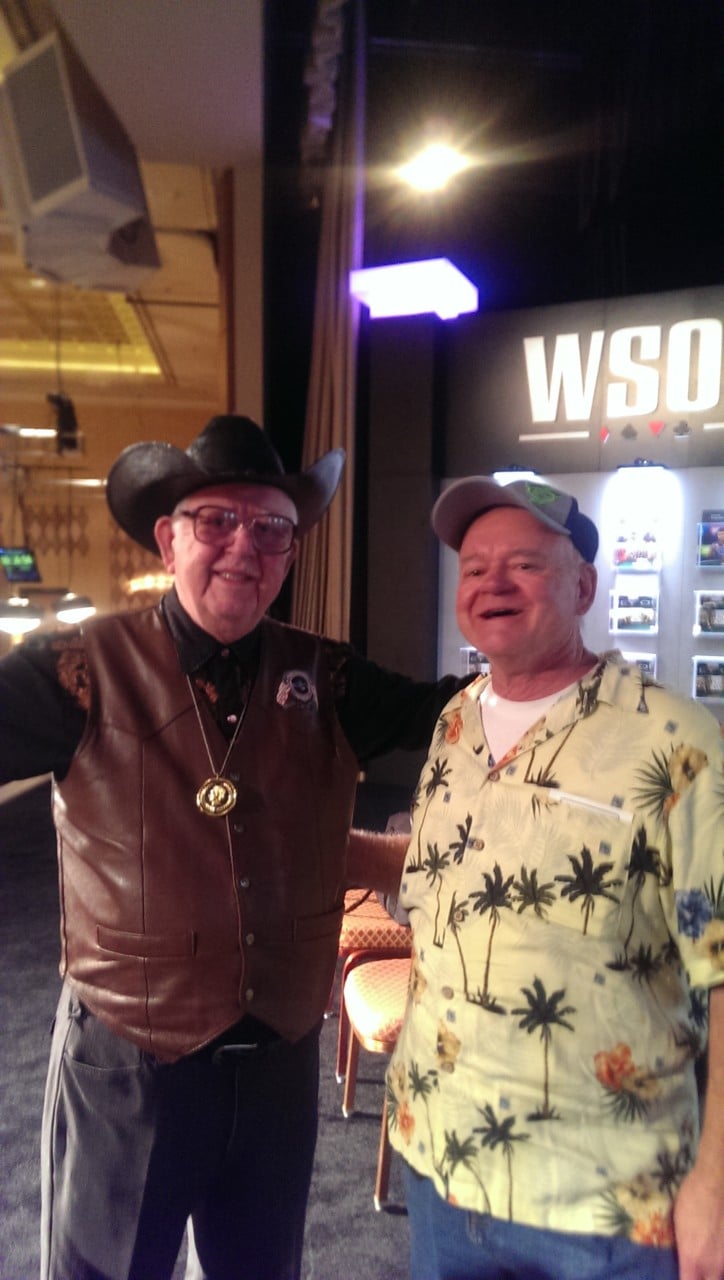 Seniors Championship founder “Oklahoma Johnny” Hale alongside defending champion Ken Lind.  The photo was taken just prior to the start of what might be the largest seniors even of any kind in history! 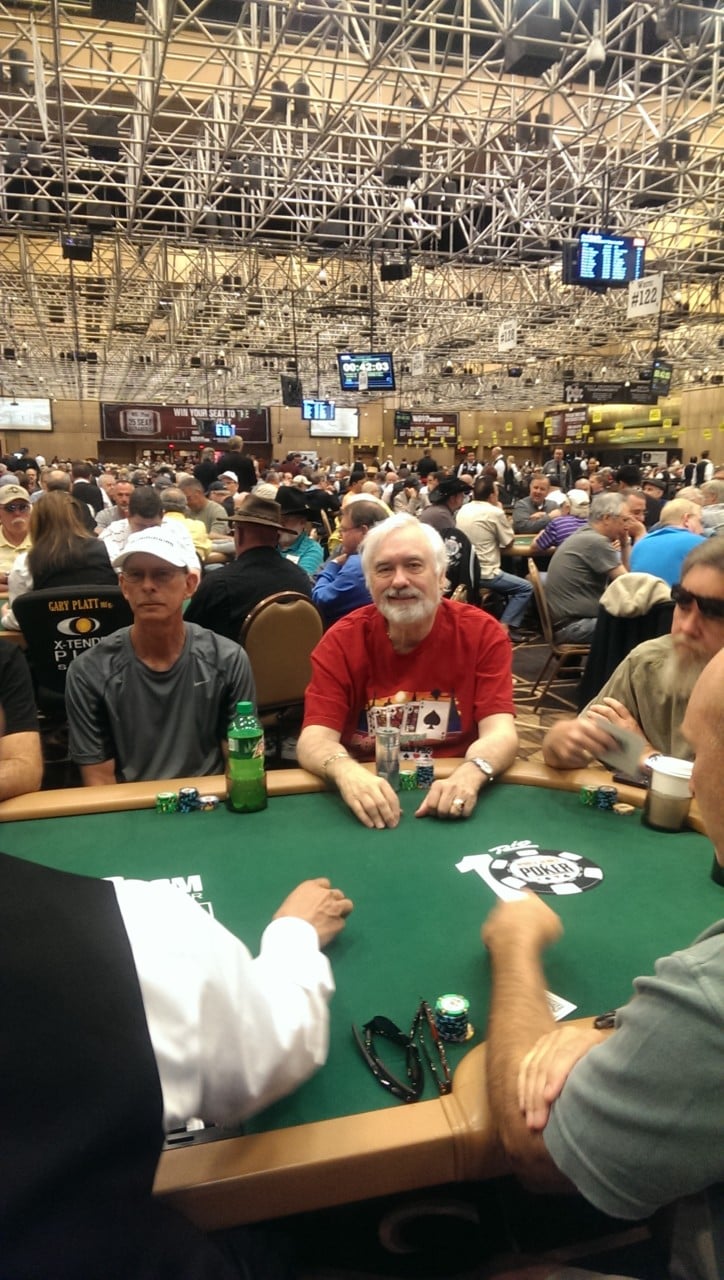 Poker Hall of Fame inductee and 1983 world champion, Tom McEvoy.  Tom is one of the finest people I’ve ever met.  Truly an asset to the game who rightly was recognized for all his contributions last year by being included in the Poker Hall of Fame. 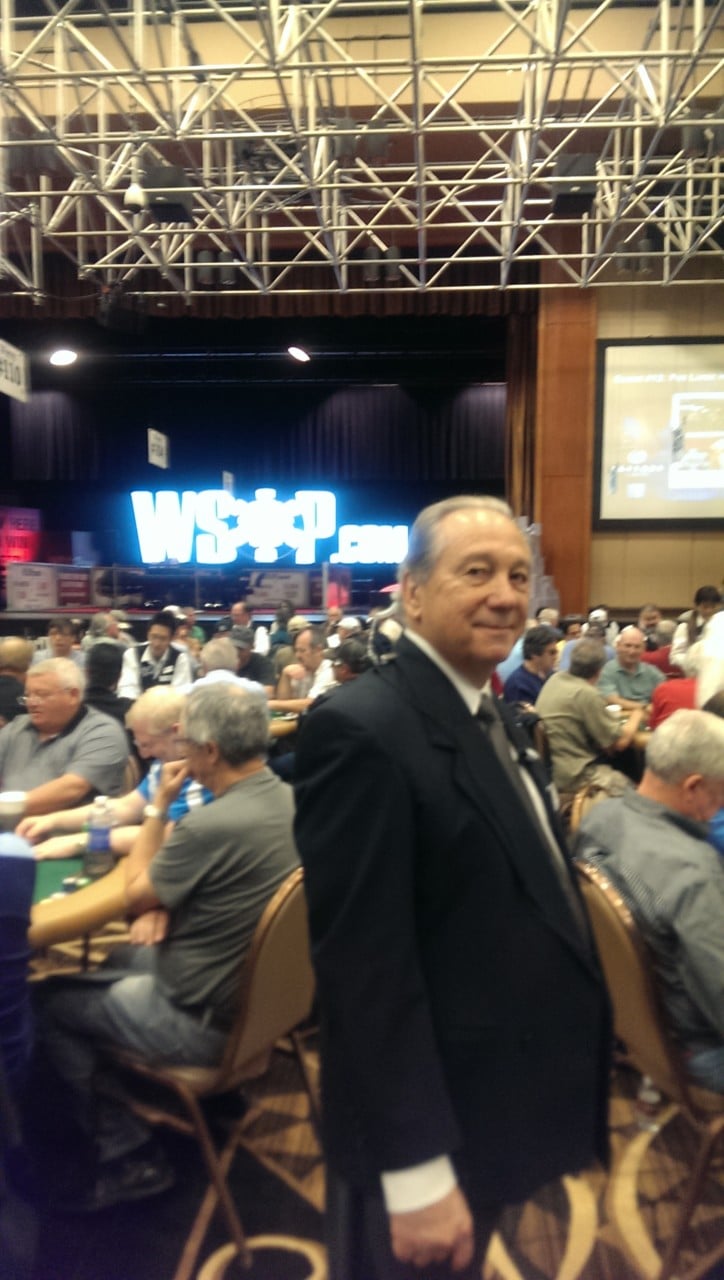 My mentor Nick Gullo, from New Orleans.  Nick is an old-style casino executive who was around during the days when the guys with names ending in a vowel ran Las Vegas.  He’s taught me a lot over the years.  Nick knows as much about fine dining as he does the casino business.  When we’re together, we usually talk about New Orleans restaurants.  One of the best dinner companions you’ll ever meet. 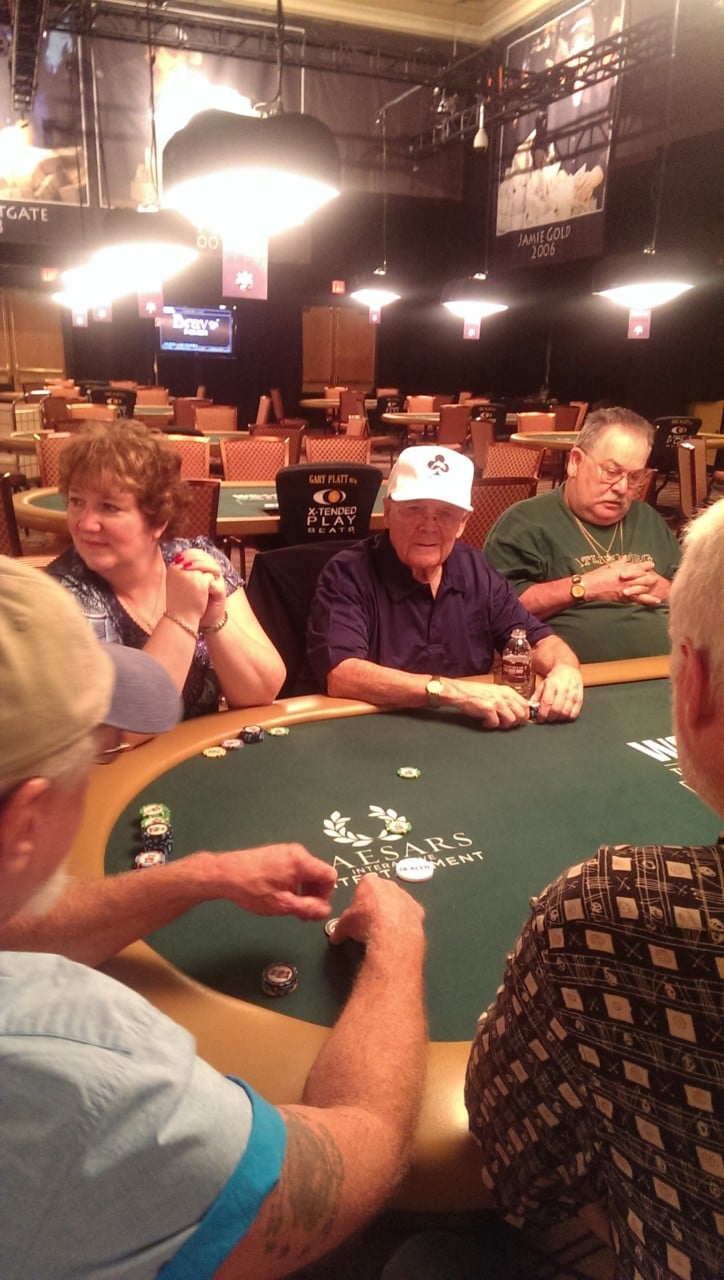 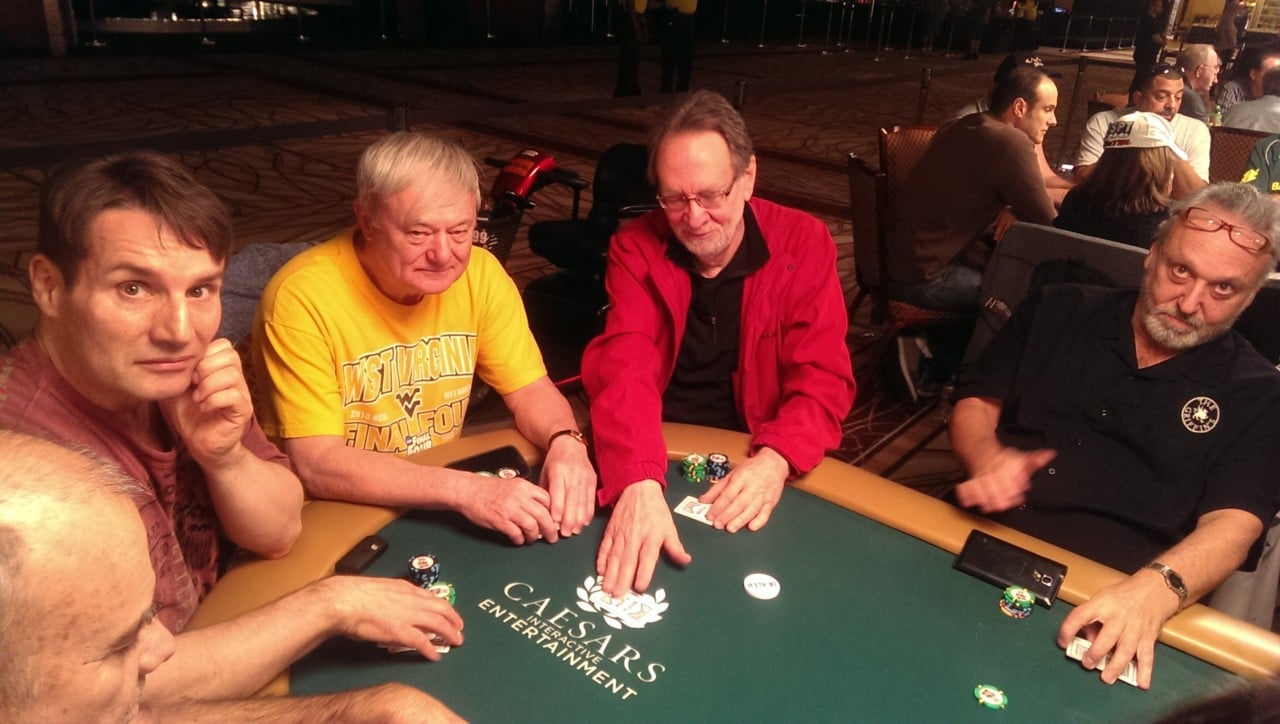 My two longtime pals — in the yellow shirt is my personal accountant Howard Mann, CPA from Martinsburg, WV.  To all my creditors — you’re lucky that Howard is handling my finances or you’d have to wait even longer.  Send him a box of chocolates.  The fellow next to him in the red jacket is Dr. Arthur Reber, a former professor of psychology at Brooklyn College in New York City.  I would say that Dr. Reber is “my psychologist,” but that doesn’t sound right.  Perhaps I can book a session and Howard Mann and handle the financing. 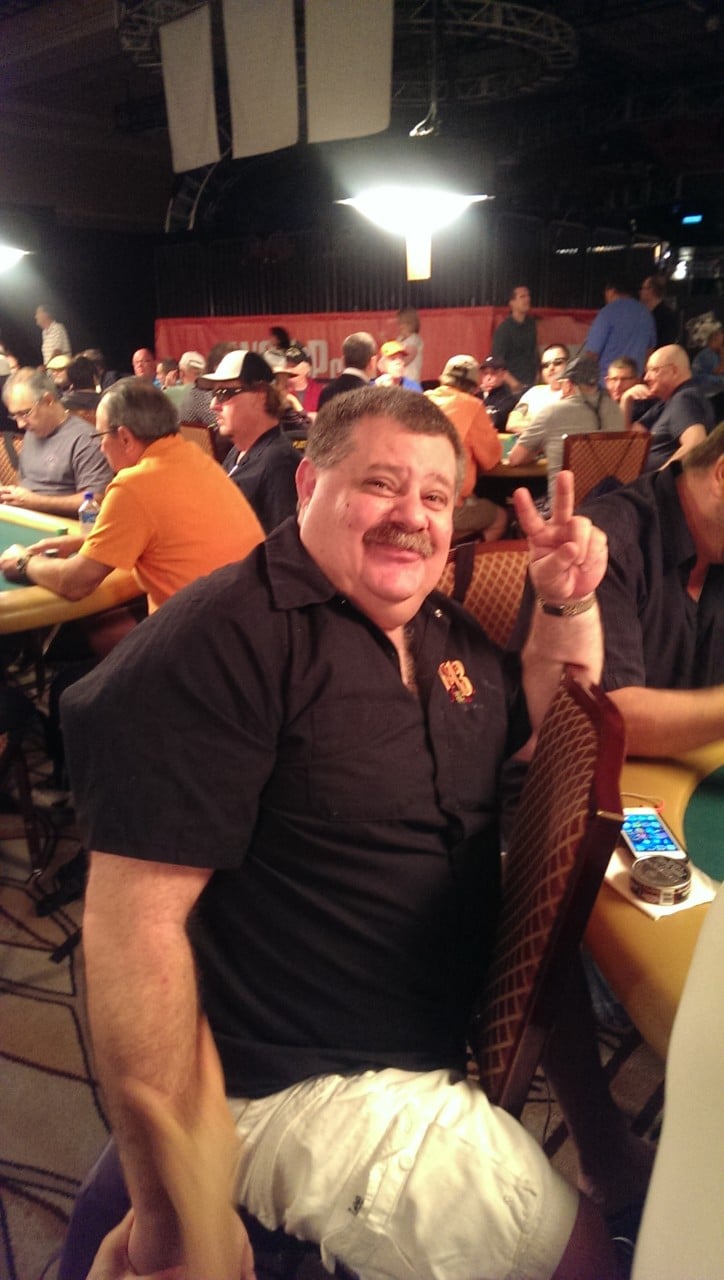 Here’s big Al Adler, who owns a casino in California’s central valley.  When I traveled the WSOP Circuit, Al was always one of my favorite people to hang out with.  We got Al to appear on a “Poker Night in America” show filmed late last year up in Reno.  That should air sometime this fall.  Al makes poker fun, which is why I like to be around him.  He’s great for the game. 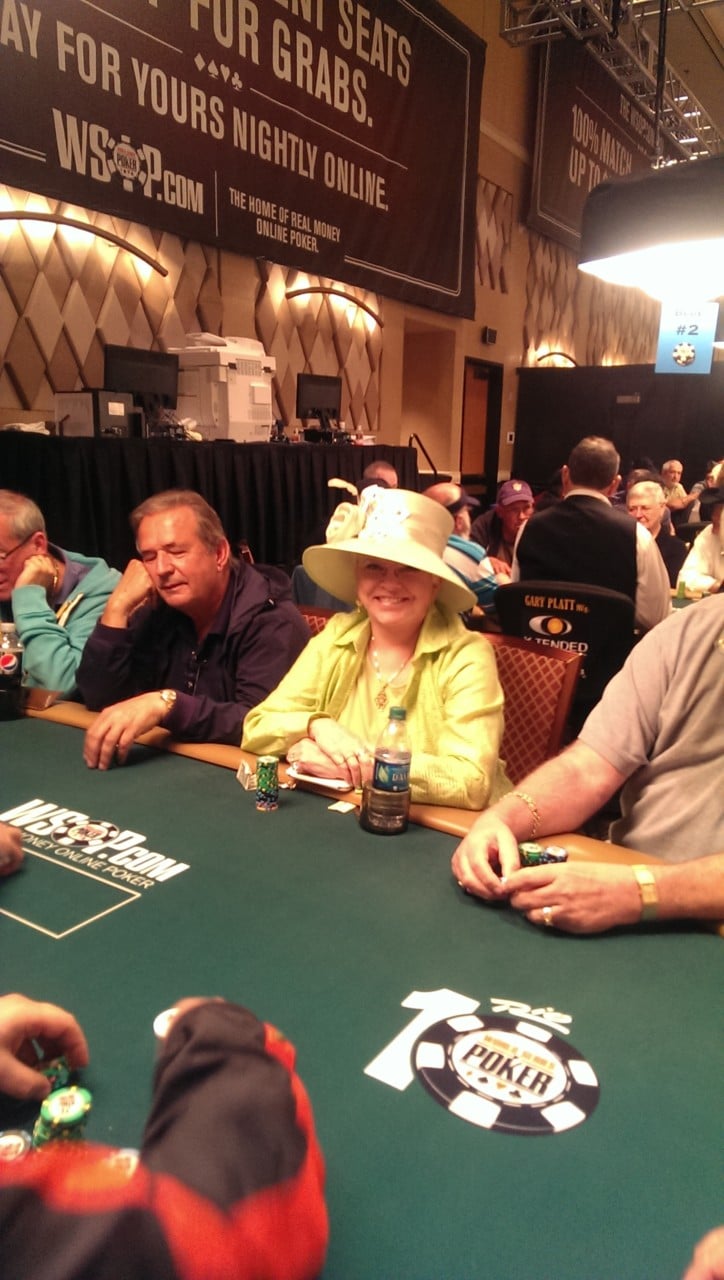 Susie Isaacs (that’s her in the cool yellow hat) and I go back some 20 years, as columnists at Card Player. 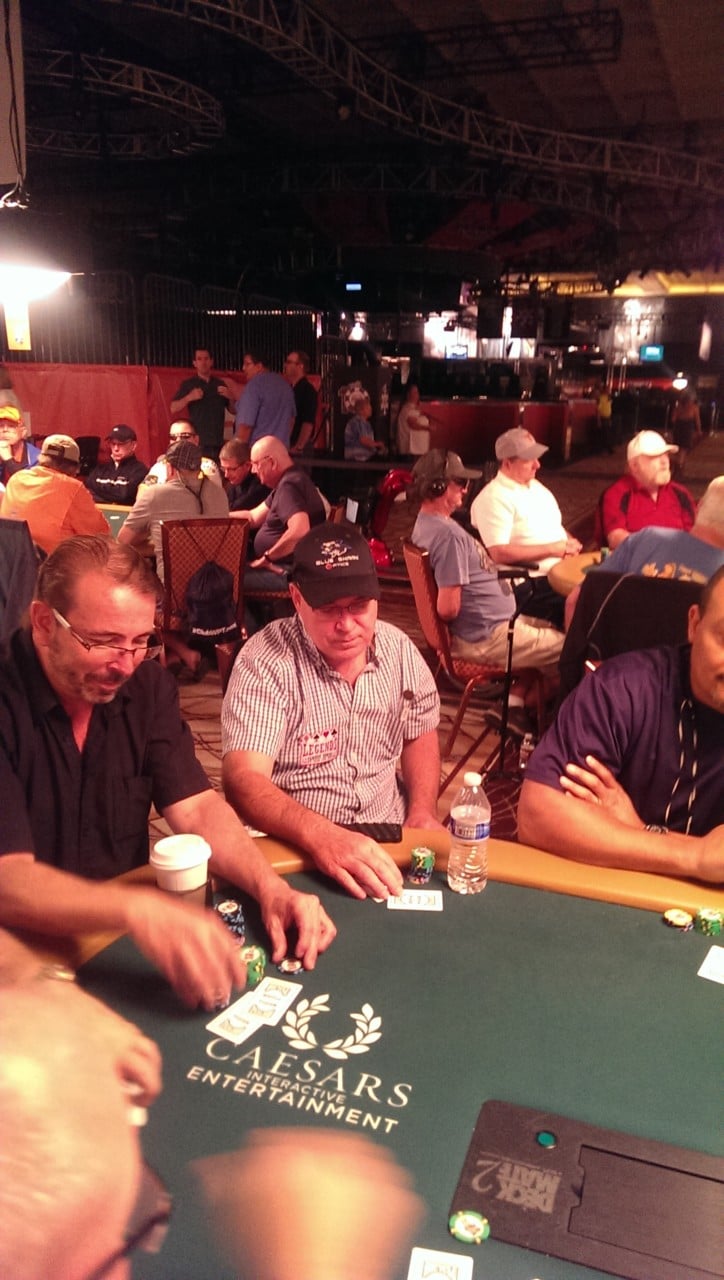 Here’s the “Alabama Cowboy,” Hoyt Corkins, a two-time WSOP gold bracelet winner.  Hoyt was one of the game’s most popular players during the height of the poker boom and still plays at a high level.  Good to see him in the field today of the seniors’ championship.

The man in the center of the picture with his hand on his chin is actor James Woods.  The former Oscar nominee, noted for his work in Casino, Salvador, The Onion Field, JFK, as well as so many other movies and television shows plays at the WSOP regularly.  Woods loves the game.  However, his politics could sure use some work.  He’s always bashing progressive causes on Twitter (watch James Wood pick up 50 more Twitter followers because I wrote that).

Here’s another of my closest friends, Mark Napolitano — originally from London and now living in Austin, TX along with his lovely wife Tina.  Mark, Tina, Marieta, and I are going to head off to the wine country this fall and enjoy some of nature’s delights.  Mark is best known as the founder of PokerPages.com.  He actually hired me to be a poker coach once, can you believe that?  That’s about the time the site started to crash. 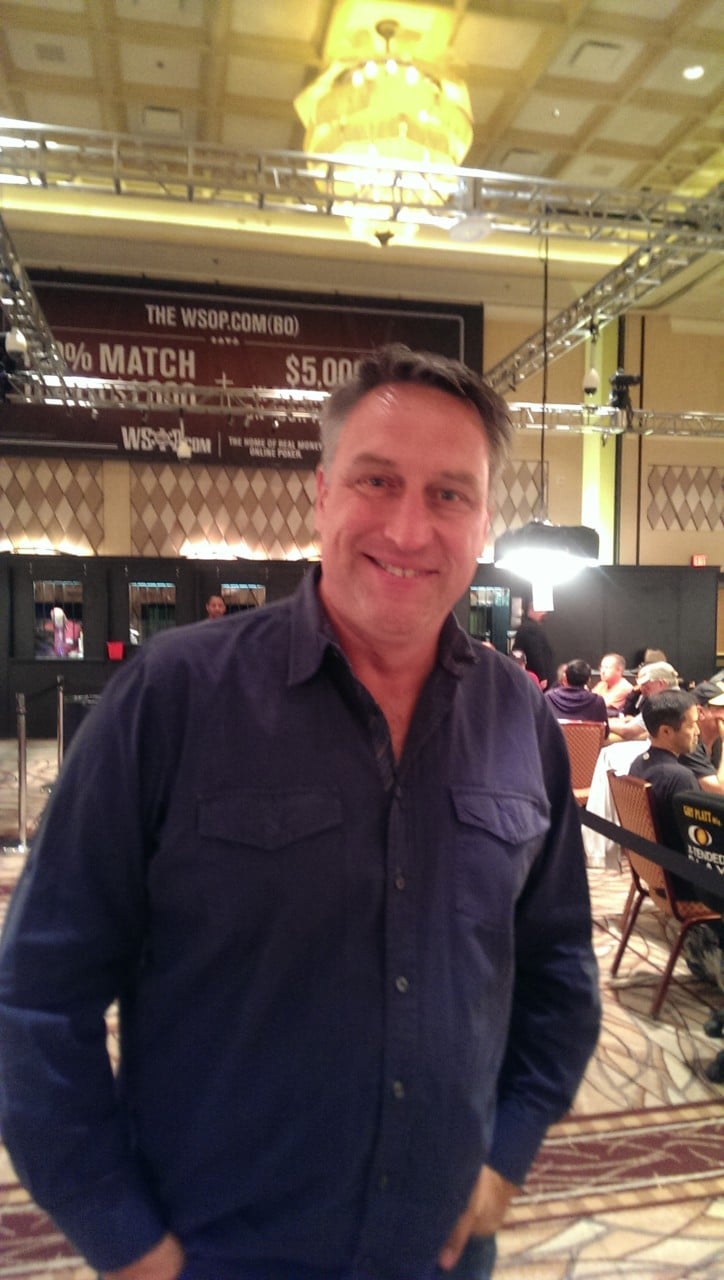 Bill Edler — great poker player, talented sports gambler, and lousy golfer.  I’ve enjoyed Bill’s company for years.  Always a gentleman.  Lots of class.  We have lots of mutual friends, and he’s always welcome to any social engagement I’m at, especially when he pays. 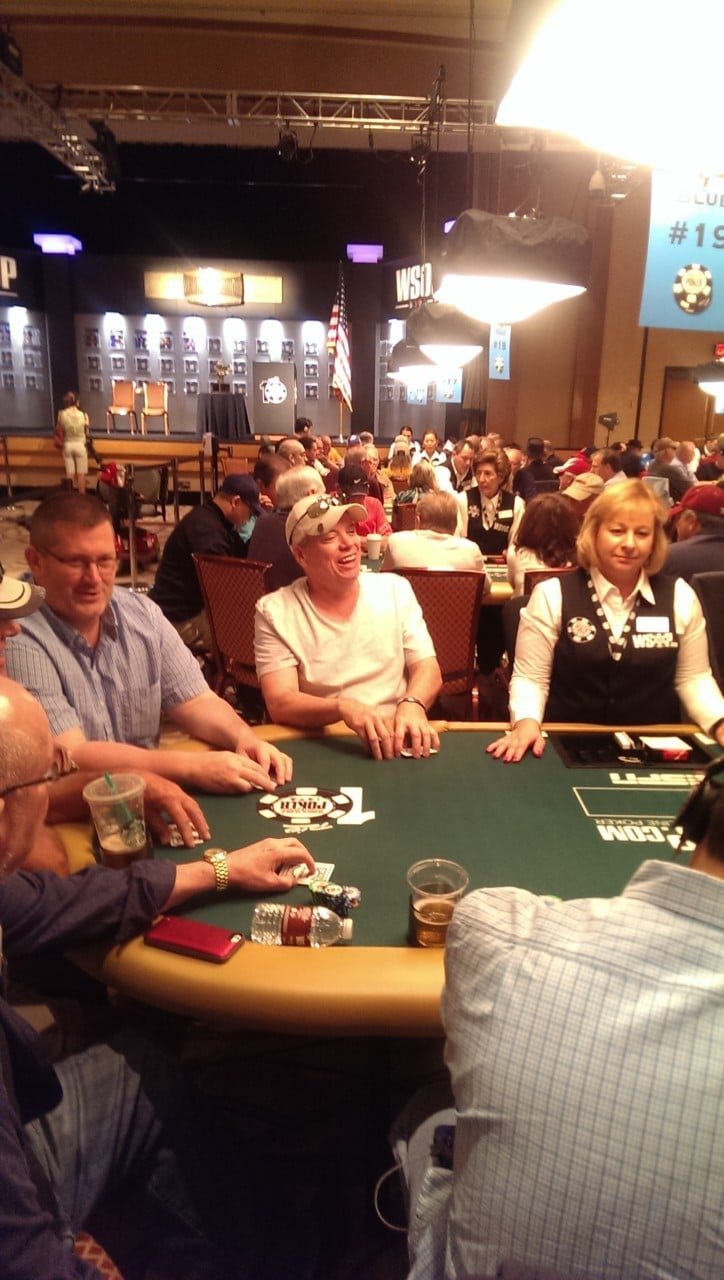 Blair Rodman.  Note:  Just copy everything I wrote about Bill Edler above and paste it here. 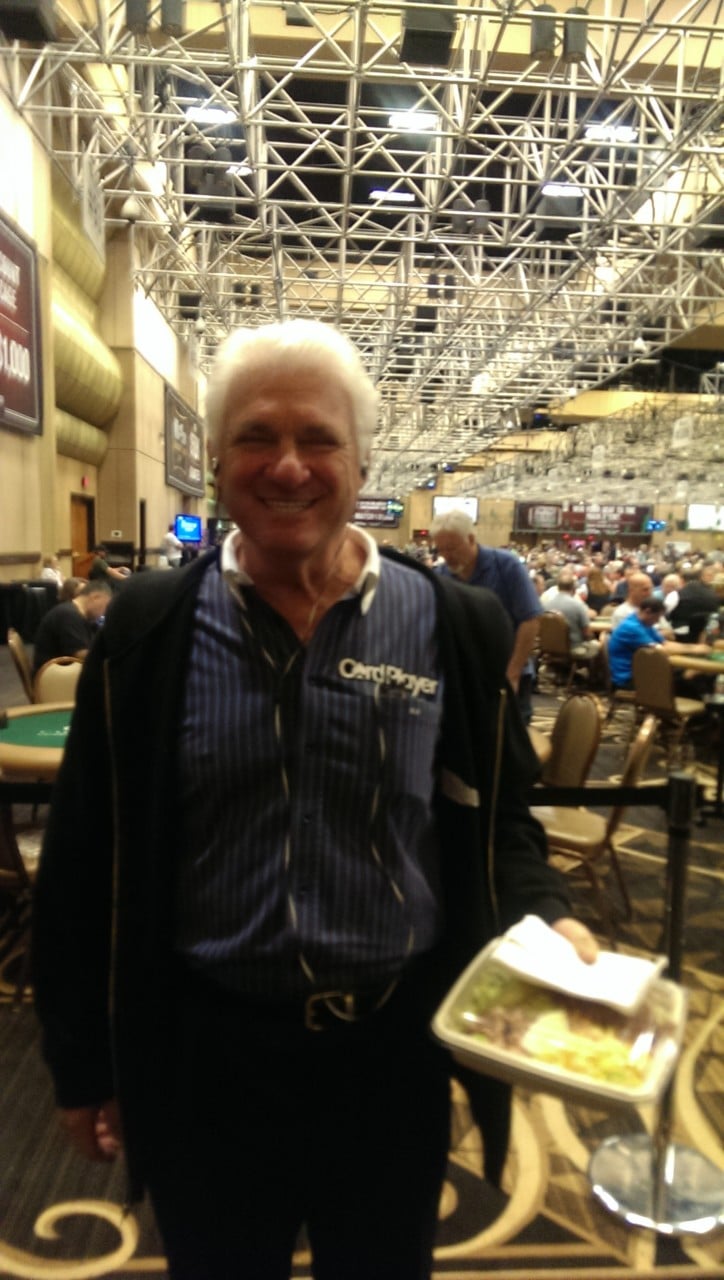 Barry Shulman, owner, and publisher of Card Player Magazine.  Barry has done a lot of the game, not just as the owner of the magazine and website, but also as a player.  He’s won WSOP-Europe Main Event Championship, two gold bracelets, and now travels the world with his lovely wife, Allyn Jaffrey-Shulman.  Kudos to Barry for Allyn’s induction this year into the Women in Poker Hall of Fame.  Sometimes ahead, if not now, I think Barry should be seriously considered for the Poker Hall of Fame. 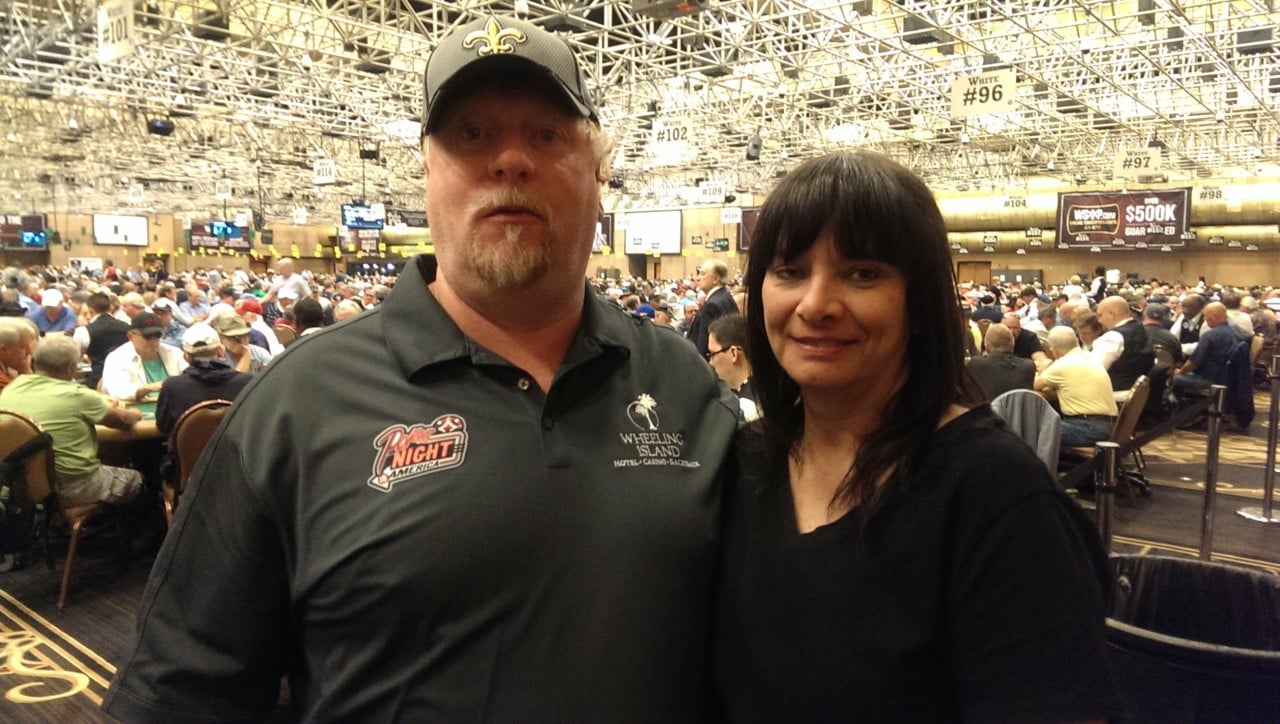 Darvin Moon, who finished as the runner-up in the Main Event Championship a few years ago.  I got to know Darvin more this past year, as he was featured on “Poker Night in America.”  Darvin is here with his wife Wendy, who always comes out to the tournaments and sweats her favorite player.  Darvin is a real ironman.  I have to write more about him sometimes.  You should see this guy swing an ax.