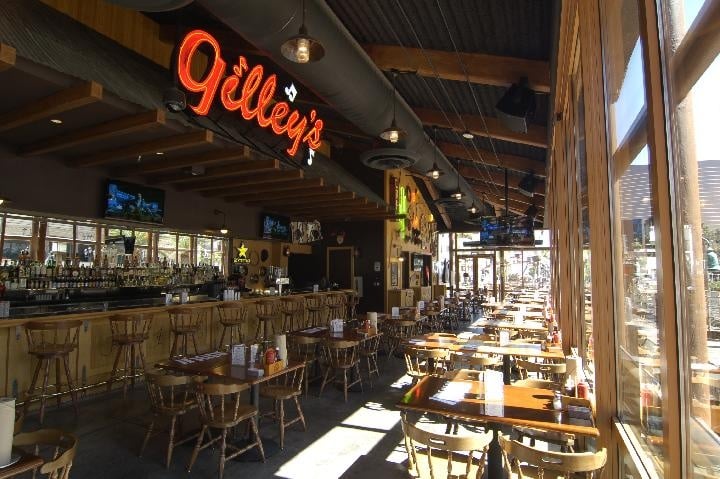 Gilley’s at Treasure Island is a horrible restaurant.

If you’re on the prowl for shitty barbecue, may I respectfully suggest the ghastly catacomb of rotting animal flesh that fronts the Treasure Island Hotel and Casino in Las Vegas, better known as Gilley’s Saloon, Dance Hall, and Barbecue.

This might be the worst restaurant on The Strip — including the hot dog hustler parked out in front of Pawn Stars 24/7.  If there’s a more dire dive of disappointment in this city — I’ve yet to succumb to such culinary depths.  Virtually everything about Gilley’s sucked — from the utterly flavorless incarceration masquerading as the main course, to the scatterbrained service staff which can generously be described as uninformed and indifferent to every customer’s necessity and desire.  Did I mention yet that I didn’t particularly care for the place?

I’m just getting warmed up.

Allow me to elaborate, and even go on a bit of a rant.

Two of us   spent $110 (with tip).  Still, we left hungry as toothless wolves.  Mind you, we weren’t enticed by any more of the tasteless travesty plopped upon our table at Gilley’s — just famished for anything for fucks sake, even that stale hot dog down the street that sure as shit would have hit the magic spot after 90 minutes inside Gilley’s pushing my food back and forth across the plate like I was playing chess.  We ordered one adult beverage each (one domestic beer and a house margarita).  So, subtract standard gratuity and two drinks, and the food still came out to about $35 apiece.  For half that figure, a five-minute drive could have landed us instead at Rollin’ Smoke Barbecue, a heap of picnic-tables nestled on an industrial strip crammed under a busy interstate, which are the local experts at feeding the hungry for $16 a lip-smacking plate, complete with all the delicious trimmings (and no tipping required).  Live and learn.  Sometimes, you don’t get what you pay for.  Sometimes you just get fucked.

Seriously.  How do you royally screw up good ole’ Texas barbecue, when that’s supposedly the house specialty?  You’ve got one job, people.  Do your job.  Good grief, how can someone actually put his (real) name on this place?

Of course, Gilley’s was never known for the food.  It’s more like a poor-man pick-up joint for shit kickers driving Chevy trucks worth more than their mobile homes.  Long neck beer bottles, $24 t-shirts, mechanical bulls mounted by drunk girls wearing thin-string bikinis — a sort of contrarian “we don’t give a shit” Times Square-South tourist trap where you expect to be fucked in the ass without the grease and pay twice the going rate for the privilege — that’s Gilley’s in one sharp spur of a sentence.

Gilley’s was created by country-western singer Mickey Gilley (who apparently is still alive according to his Wikipedia page and deserves to be charged with crimes against humanity for opening this abomination).  The bar and saloon first achieved fame in 1980 as the filming location for the hit movie “Urban Cowboy,” starring John Travolta, back when he was still the cute feather-haired Kotter kid and long before he turned into a psycho for the cult of Scientology.  The Houston suburb of Pasadena instantly became Gilley’s flagship property and turned the notoriety of a brawling backroom brimming with barstools into a bustling multi-million dollar business, ala a Hard Rock Cafe for the country music crowd.  Years later, the (now imploded) Frontier Hotel and Casino housed Gilley’s initial venture into Las Vegas.  Then, following a six-year void when Gilley’s was demolished into dust and the last remnants of the mechanical bull had been trucked off to a garbage dump in Pahrump, Gilley’s rebooted and 2.0 opened just as short walk away, at TI.

Our first hint of the disaster to come should have been as clear as the gorgeous 75-degree day.  Gilley’s front room was only about one-third filled to capacity during what should have been the busiest time of the week — 6:30 on a Saturday night.  When it comes to restaurants, if empty tables in prime time could talk, they usually scream — this place sucks!

Gilley’s is divided into two sections — a honky-tonk dive bar corded off towards the rear with a giant concrete dance floor and the famous bucking mechanical bull.  All this looked about as appealing as standing out in a parking lot watching someone change a flat tire.  I can’t imagine the unfathomable experience of spending a Saturday night (or any night of my life) sardined in-between line dancers of cowboy-hatted and belt-buckled yahoos guzzling Coors Light like it’s tap water at $7 a pop with a line stretching to the flooded urinal like Garth Brooks was playing a free concert inside.  Not my thing.  Then again, I didn’t come for the bull.  I came for the pork.

To be fair, Gilley’s does have at least one redeeming aesthetic quality, which is its ideal location.  It’s perfectly situated near the corner of Las Vegas Blvd. and Sands Blvd. — across the street from the Wynn, the Venetian (which continues to be boycotted), and Fashion Show Mall.  Giant plate-glass windows looking out onto The Strip makes for prime people-watching, although by the time I’d begun ingesting my sad excuse of a meal, those on the outside had become the object of my envy.

Full barbecue dinners with multiple meat options plus two side dishes range in price from $28.95 up to $55.95 (for fucking barbecue!).  Fortunately, as things turned out, less turned out to be more.  We both ordered the economy portion ($28.95), which was a blessing in disguise since the ribs (and side dishes) were so inexplicably bland, my taste buds seemed to numbed by an overdose of Novacane.  What happened to the flavor?

Indeed, there was something mighty peculiar about the pork ribs I ordered.  They weren’t salty.  They weren’t spicy.  They weren’t sweet.  They were sort of like — nothing.  Like something unearthed at an archaeological dig and tossed into a plate.  The pork ends resembled a grizzled jerky.  The barbecue sauce was so astonishingly flavorless that I did a first — hopelessly attempting to salvage the dining disaster by doctoring the sauce up with a shot of Tabasco.  How to describe the taste?  Think of boiled cafeteria-style ribs where every sliver and ounce of flavor was completely eviscerated out of the poor unfortunate animal which gave up its miserable life for the abomination of this appalling dining experience.

If the pork ribs were a disaster, then the baked beans turned out to be a magic show of disbelief.  Advertised on the menu as marinated in a zesty barbecue sauce and baked in molasses, the (canned?) beans could have possibly salvaged at least a star on my Trip Adviser review had they been the least bit tasty, or edible.  Not that I’m familiar with prison food on a firsthand basis, but those beans belonged in Leavenworth.  Slaves in chains eat tastier fare.  After two bites, and a napkin of mush, I gave up on the beans and pretty much knew the entire meal was a disaster.

One thing you have to hand to Southerners is — they usually know good food.  They (we) especially know good barbecue.  It’s just part of our DNA.  Just like you can’t open up a shitty Chinese restaurant in San Francisco or a lousy cheesesteak grill in Philadelphia and expect to stay in business, how Gilley’s has the balls to bill itself as the place for authentic Texas-style barbecue is jaw-dropping.  Then again, if Guy Fieri can bill himself a master chef in this town, perhaps any fiction can be fabricated as fact.

Oddly enough, in some places the food really sucks but the service can partially compensate for a bad meal.  That’s happened to me — more times than I can recount, unfortunately.  Not this time, however.  You’ve got to really hand it to Gilley’s.  At least they’re consistent.  We were seated at the farthest possible table away from the entrance, despite plenty of available seats much closer to the front.  Once the bored waitress dressed in a cowboy hat and ass-kicking boots appeared with an accent that sounded like she was from Connecticut, things quickly went downhill from there.

For starters, I asked our server about a rib recommendation, eager for something that resembled Tony Roma’s — which has long been the gold standard for baby backs.  Well, our waitress had never heard of Tony Roma’s, a terribly bad sign that immediately disqualified her as our resident expert on rib commendations.  Next, when I asked for a baked potato — standard fare in any respectable barbecue joint, especially with a Texas theme — I came up rolling snake eyes.  “We don’t have baked potato,” she snapped.  Silly me, expecting something so simple as a baked potato to be on the menu.

I opted instead for (jail) beans, plus a side of onion rings.  Unlike the Bloomin’ Onion, a crispy oil-infested heart-stopping delight of debauchery served at Outback Steakhouse which are absolutely terrible for you, but which are about as short-term joyous as a hit of crack cocaine, my Gilley’s onion rings must have come straight from the deep freezer to the heat lamp.  Holy mother of god — even the onion rings were bland!  How is this even possible?  How do you murder the flavor out of onions?  As for other customary accompaniments in many rib joints, no bread was served.  There was no complimentary appetizer.  Nothing.  The waitress even forgot to bring a lemon for the iced tea.

I’m not quite finished yet.  Another bitch about Gilley’s — no bibs.  Baby bibs are typically provided by any respectable establishment specializing in ribs.  That way, the front of your shirt doesn’t end up looking like a Jackson Pollock painting.  Bibs are especially critical in popular rib restaurants where men wear ties.  Every restaurant in Memphis and New Orleans offers a bib to patrons.  Nothing ruins a tie faster than a blotch of reddish barbecue sauce.

After my third rib and second spill upon my yellow shirt, I glanced up at my sad-looking dinner companion and mumbled — “hey, this isn’t very good, is it?”  Wanting to be polite and nowhere near the asshole I can so often be, he just looked shrugged his shoulders and explained that he was really, really hungry.  I felt like I’d enlisted in the fucking Army.

After this torment of a meal was over, we dutifully paid our check, left a most undeserved 20 percent gratuity, and then bolted for the front door.  Despite walking past several employees who were standing around, including a hostess podium staffed by Gilley’s girls who seemed bored out of their skulls, no one bothered to say, “thank you,” or “please, come back again.”

Then again, don’t bother with the customary salutations.  We won’t be back again.