The Perfect Wedding Gift for Charles Manson and His New Bride

It sure has been a weird couple of weeks.

Next, despite not doing much actual singing during her horrendous shows and struggling badly to sell tickets, Britney Spears was presented with a key to the city by some local hacks in a bizarre official ceremony in Las Vegas where the presenter forgot to bring along the key.

After that, what remains of Buffalo, New York was hit with so much snowfall that the local residents there are going to be pissing ice cubes at least until next May.

Then most recently, we now find out that America’s “favorite dad,” Bill Cosby is, in fact, a serial rapist who drugged more than a dozen victims.

What next, 80-year-old Charles Manson marrying a seemingly normal 26-year-old pop tart from the Midwest?

I mean, what the fuck?

Writer’s Note:  Last week, Martin Jacobson won the 2014 World Series of Poker Main Event.  Yet, as one former winner reveals, like a fine wine, sometimes a true champion in every sense of the word materializes not in a flash of victory, but instead following more than a decade of deeper reflection.

Of the 15 world poker champions crowned in this, the current century, has any winner been more erased from the game’s recent memory than Robert Varkonyi?

The 2002 World Series of Poker Main Event champ never quite received the respect nor the fame he was entitled to — acclaim whether deserved or not just about everyone else that won since 2000 was able to enjoy.  While other champions profited from cozy seven-figure endorsement deals and lucrative public appearances, Varkonyi went back to being Mr. Anonymous — Robert Varkonyi, the forgotten champion, as in the fill-in-the-blank subject of “whatever happened to…?”  Not that the 53-year-old Everyman seems the least bit fazed by this concerted oversight.  Yet, somehow that makes our collective abandonment even more egregious.

Talk to Varkonyi and he’ll readily admit that he prefers a day-to-day existence of relative obscurity, even within the poker world when he so chooses to grace it, which has become increasingly rare nowadays.  An argument can even be made that staying out of the spotlight became a sort of hidden blessing for the low-key financial investor who still lives a quiet life along with his part-time poker playing wife Olga, and two daughters Victoria and Valerie, in Brooklyn, New York.

Another Star-Studded Cash Game Filmed for “Poker Night in America”

Pittsburgh, PA (Nov. 17) — By any measure, it’s been an eventful week for Phil Hellmuth, Jr., best known as the 1989 world poker champion and the all-time leader in WSOP gold bracelet wins.

He began his Sunday night in Las Vegas, by giving the induction speech for the legendary Jack McClelland, who was officially inducted into the Poker Hall of Fame.

The following two days, he spent several hours appearing on national television as part of ESPN’s coverage team for the World Series of Poker championship finale.

Then, it was off to Pittsburgh for an appearance on “Poker Night in America,” which is broadcast weekly on CBS Sports.  Hellmuth played in the televised cash game for two full days, which was also shown via live stream.

What’s So Funny About Being Stupid?

You might have seen a video that’s been getting lots of attention lately.  It was shot last month at a major university.

Several college students — presumably between the ages of 18 and 22 — were asked some simple questions about government and history.  These queries
were on subjects that just about any school-age child would be able to answer.  The very notion that these ridiculously easy questions were being targeted at college students seemed downright insulting.

The whole setup was just the start of what would became a disgraceful episode.  The brief on-the-street exchanges which followed revealed the vast deficit of basic knowledge lacked by so many Americans, including segments within our society which are supposed to be among the smartest.  We’re talking about adults taking advanced university courses here.  After all, if college students don’t know the answers, would you expect the numbers to be any higher among those who are less educated and who lack current academic ties?

Case in point.  Several students didn’t know the name of the current Vice President of the United States.  Fair enough.  Joe Biden isn’t exactly a household name.  He isn’t in the news every day.  But the next question and the blank stares which followed were jaw-dropping.

“Who won the American Civil War?”

Must I do everything around here?

I already do your handicapping.  Do I also have to do your thinking for you?

When I say “fire on the teaser wheel,” your only question should be “how high, Sir?”

Well today, my answer is — SKY’S THE LIMIT.

In one of the wildest NHL games you’ll ever see, the closing moments of tonight’s New York Rangers–Pittsburgh Penguins game played in Downtown Pittsburgh ended as a shocker.  It was so insane, almost half of the 18,000 fans in attendance completely missed it.  Here’s what happened. 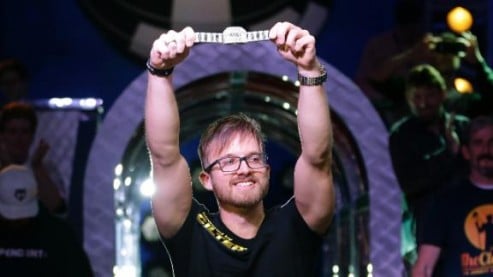 Something to Think About on Veterans Day

Happy Veterans Day — especially to those who served this nation, both past and present.

Let’s take a moment to remember what this day was really intended to celebrate and who it’s designed to honor.

Veterans Day was first proclaimed on November 11, 1919.  It was initially called “Armistice Day.”  Thereafter, it became a national holiday intended to honor all of the men and women who have served in the United States armed forces.

Earlier tonight, I had the great honor of emceeing this year’s annual Poker Hall of Fame induction ceremony.

I’m deeply grateful to Ty Stewart and Seth Palansky (from Caesars Entertainment) for being chosen by them to host the event and for being permitted to stand along with so many poker legends, both past and present.

The Class of 2014 was comprised to two inductees — Jack McClelland and Daniel Negreanu.  Both of these exceptional gentlemen have contributed to the game immensely in different ways — McClelland primarily as a tournament official and industry leader, and Negreanu as a poker player and ambassador.  I was pleased to see quite contrasting individuals honored in this way, which reveals there are many ways to be successful, have an impact, and make the game better.  Both honorees have done exactly that, and more.

The night was made even more special because we all returned to the hallowed “place that made poker famous” (that’s the casino’s catchy tagline).  Binion’s Gambling Hall (formally Binion’s Horseshoe) rolled out the red carpet for everyone who attended, hosting the gathering inside what used to be known as Benny’s Bullpen.  Now, it’s called the Longhorn Room.  My deepest thanks goes to Michelle, Paul, Jerry, Brad, and all the other fine people working at Binion’s who helped put the evening together, and who keep the tradition alive.