The Petre Family in Bucharest, Romania, circa 1963. Ion Petre stands in the middle. Marieta is the little girl in front.

Ion Petre was born in Bucharest, Romania, lived in Geldrop, Holland, and died unexpectantly in Oct. 2013.  He was my brother-in-law.

Ion Petre was born in Bucharest, Romania in 1952.

Despite growing up in a Communist country, Ion enjoyed a childhood filled with happy memories.  His sister, Marieta (my wife) was born in 1961.  Despite their nine-year age difference, they were inseparable for most of their lives.  Wherever they lived, they talked and laughed often.

Ion was a dedicated student.  He could have gone into just about any field of study and succeeded.  But he enjoyed creating and building things most of all.  And so, his dream was to become an engineer.

Ion served a mandatory tour of duty in the Romanian Army.  Following his discharge, he attended one of the country’s most prestigious universities.  He earned his diploma as a civil engineer.

Next, Ion made what would become a life-changing decision.  Ion decided to leave Romania and immigrate to the West.

Gheorghe Petre (father) with his two children Marieta and Ion, along with a reindeer at Christmas time. Taken in Bucharest around 1964

Leaving Romania wasn’t easy.  Not only was immigrating to a Western country exceeding difficult for Romanians, but it was also a deeply grueling personal decision to leave his family behind and try and build a new life.  But Ion was determined, a quality that would serve him well all of his life.

Ion found a new home in The Netherlands in the early 1980s.  He arrived in a strange country knowing no one.  He didn’t even speak the language.

Imagine the utter isolation of having no friends in a strange country.  Not knowing how to speak the language.  No job prospects.  Little money.

But if ever there was a champion of overcoming new challenges, it was Ion.  He was determined to make it in his new country and pursued a path worthy of great admiration.

He couldn’t afford a car.  So, during his earliest years, Ion rode a bicycle throughout The Netherlands.  He worked by day and attended language school by night.  He woke up early and went to sleep late.  Then, there was always that bicycle.

Ion rode his bike through the rain and snow many times.  He faced the cold winter winds head-on.  He gradually came to learn Dutch — one of Europe’s more difficult languages to master — and eventually became fluent.  During his formative years as a new citizen, he never relied on government assistance or took a hand out.  He made it alone.

By the late 1980s, Ion was living in a comfortable new home near Eindhoven, near the borders with both Germany and Belgium.  As he earned more money and became more successful, he began enjoying traveling all over Western Europe.  But his favorite places to go became the Mediterranean (Italy, Spain, and Portugal), the Canary Islands, and Turkey — where he vacationed often.

He always loved hot places.  And the hotter and drier the better.  The heat was so different than what he was used to in Holland.

Marieta and Ion together, around 1979

Marieta visited her brother a number of times at his home.  He was always so eager to show her what it was like to live in Holland.  Eventually, she moved to the United States, where she went through a similar immigration experience.  Marieta came here and also made it on her own.

Over the last twenty years, Ion worked his way up in his firm, which became acquired by Suez, the French multinational corporation.  He was a valued engineer and designer.  To those who worked with him, he was far more than that.  He was a trusted friend.

Ion made a number of visits to the United States.  This was his third trip to Las Vegas.  It became his new favorite place to visit.  Not only was Las Vegas exciting, it was filled with warmth and sunshine.  Ion worshiped the sun.

This time, we planned to take him to many new places.  He landed in Las Vegas on September 30th.  But those dreams sadly went unfulfilled. 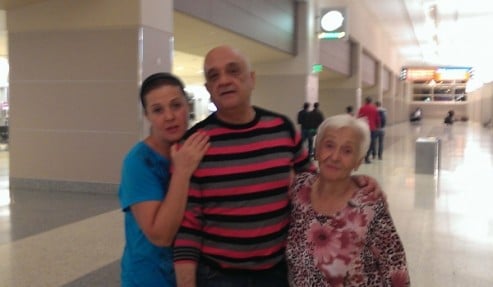 The last photograph taken of Ion Petre, with Marieta (left) and his mother, Ioana Petre (right)