One Couple’s Response to What Happened in Boston 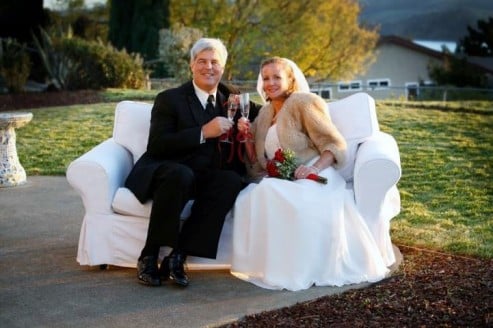 Yesterday’s terrifying events in Boston remind us that by witnessing death, we the survivors have an obligation to embrace and celebrate life.

We are all victims of this tragedy together, just as we were all victims of other horrible events before from our recent past.  We share the pain and suffering of strangers.  We share a sense of loss of losing people we did not know.  But we knew them well.  They could have been us.

Mere reflection is not enough.  Sometimes, thought must give way to action.  And sometimes action requires personal courage — even deviance.

But what precisely can we do?  How can anyone make a difference?  How can we bear witness such a savage act of cruelty and then take something inspirational from that experience that makes us feel better and perhaps even stronger?

Step one is to do something bold.  Perhaps even new.  Indeed, mass victimization of acts of terror stems from feeling utterly helpless to do anything about it.  Events get cancelled.  We chose not to do certain things.  We become paralyzed.  It’s as though we must accept our helpless fate and hope bad things won’t happen to us or those we love in the future.  But facing a modern world filled with random evil, we can never quite be certain of our fate, even as we draw in our next breath.

Caught in the web of a world of random dangers and legitimate fears that any of us might be next, what actions might we take that enable us to both honor those who are gone and celebrate those who remain alive and living?

I think I’ve discovered an answer.  Keven and Beth Garrett appear to have the best response to this question that I’ve heard in a long time.

First, let me tell you a little more about this couple.  It’s unlikely you know the Garrett Family.  They reside in the San Francisco Bay area.  To my knowledge, the Garretts did not know anyone who was hurt in the Boston tragedy.  But like most of us, they still felt a strong bond with those whose names they did not know.  They decided they had to do something.

Kevan calls this plan “A Meaningless Act of Defiance.”  And I think it’s magnificent.  Moreover, it’s hardly meaningless.  To the contrary, it’s quite meaningful.

Some of you may be familiar with “Bay to Breakers” 12K run in San Francisco.  It has been going on for 101 years and attracts all manner of people: dressed in costumes, dressed as salmon running from the finish line to the start line (upstream as it were), naked people (not everyone should be), people throwing tortillas while waiting for the race to start, and just about anything and everything you might imagine.

I have run (okay — walked) this race before and love the spectacle, the people, the views, the beer, everything about it.  It is San Francisco at its goofy best.

Today some fucktards somewhere decided to set off some bombs at the Boston Marathon.  The local news mentioned that things like the Bay to Breakers may be impacted.  The only response I could think of was to immediately register for the Bay to Breakers.

If some people are going to stay away because of the Boston bombing, then I will try to add to the numbers who will run (or walk, or stagger).  Fuck the bombers.  I am going to run across my favorite city to celebrate life and everything that goes along with it.  If I die doing it, well it will probably be from a heart-attack anyway.  And if you have to go, there are worse ways to go.

Hope to see you all soon either at BARGE or at TARGET or running naked through Golden Gate Park.

After reading this, I thought to myself — what a beautiful way of dealing with tragedy and fear.  To defy that fear and to now act anew shows the ultimate respect those who lost their lives or were injured, while celebrating his own spirit.

My response to all this is — “Run Kevan Run.”  Or perhaps I should say, “Walk Kevan Walk.”

During these next few days, we should all make it a mission to discover our “Bay to Breakers” moment.  Try something new.  Do something different.  And take just a moment while doing so to reflect on those in Boston who inspire us to reach higher, sing louder, and find more joy than we thought possible in the precious window of life.