Today, I’d like to tell you about the most important person in the world to me.  Her name is Marieta.  We were married 25 years ago on this day.

How did the time pass so quickly?  Where did all the years go?

The first time Marieta came to my eyes was an unexpected instant of perfect clarity, a fleeting moment of pure bliss.  She was too beautiful, I thought to myself.  I had no shot being with her.  I didn’t stand a chance.

But stars do align sometimes.  Gravity can be an inexplicable force.  Lightning strikes.

I Just Got “Push Polled” by Hillary Clinton’s Nevada Campaign 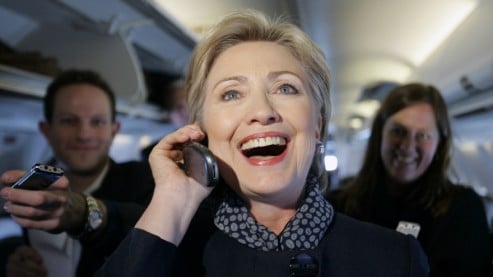 I’m about to tell you a disturbing story which helps explain why Hillary Clinton could end up as the 2016 Democratic Party nominee over Bernie Sanders.

Mudslinging works.  That’s because some mud usually sticks, no matter how filthy or detestable it is.  We all say we hate “going negative.”  Then, we eat it up.  No one gets out of a spirited political race with a bleached white suit.

From Nixon to LBJ, from to Daley to JFK, from Bush swiftboating Kerry to Bush bullying McCain in South Carolina — history has taught us one simple and indisputable fact.  Election victories often come down to doing whatever it takes to win.

Travel Advisory! Stay Away from the Barbecue in Bakersfield!

Tasty barbecue shouldn’t be slathered beneath a pool of barbecue sauce.  That is, unless it’s a tasty sauce.

One would expect Bakersfield to be a terrific barbecue town.  The city’s outskirts are ringed with giant cattle farms in California’s Central Valley.  Cattle roam in green fields eating their way a bite of grass at a time to warm waiting plates of carnivores who are passionate about their barbecue.  If those poor beasts only knew of the horror that eventually awaits them, to be humiliated beneath a slathering of shitty barbecue sauce, they’d probably chose something different.  Then again, they can’t make choices for themselves.  Because, after all, they’re cows and besides — there’s no such thing as free will.

Every so often, I’m afflicted with “writer’s block.”

From what I hear among other writers, this is fairly a common condition.  One cannot write consistently for several years without faithfully going to the well and occasionally coming up with an empty pail.  Sometimes, the source runs dry.

“Writer’s block” is mental state.  It’s debilitating and can even be depressing — especially to a writer!  It’s like trying to speak, only the words won’t come out.  Call it a literary stutter.

My past bouts with writer’s block were almost always sprung by a bombardment of way too many thoughts all at once.  It’s not as though there’s nothing to write about.  To the contrary — I always find there’s far too much out there that interests me — including things that make me go ballistic, or provide tremendous joy (and everything in-between).  Most writers like to share their discoveries, experiences, and emotions, and I’m no exception.

Where Are All the Hillary Clinton Supporters?

A puzzling void has emerged within the 2016 presidential race which is this:  I can’t find a single voter who enthusiastically supports Hillary Clinton.

Oh, I’m sure they’re out there — in the millions.  According to recent polls, she’s still the most popular candidate in terms of overall national support.  The trouble is, I can’t identify a single soul by name who openly supports her.  It’s sort of like trying to find someone who will admit they watch a bad television show.  Call it a political closet case.

The questions are — could it simply be me?  Or, could it be something else?  Might Hillary Clinton have an enormous problem on her hands as the primary season gets underway?