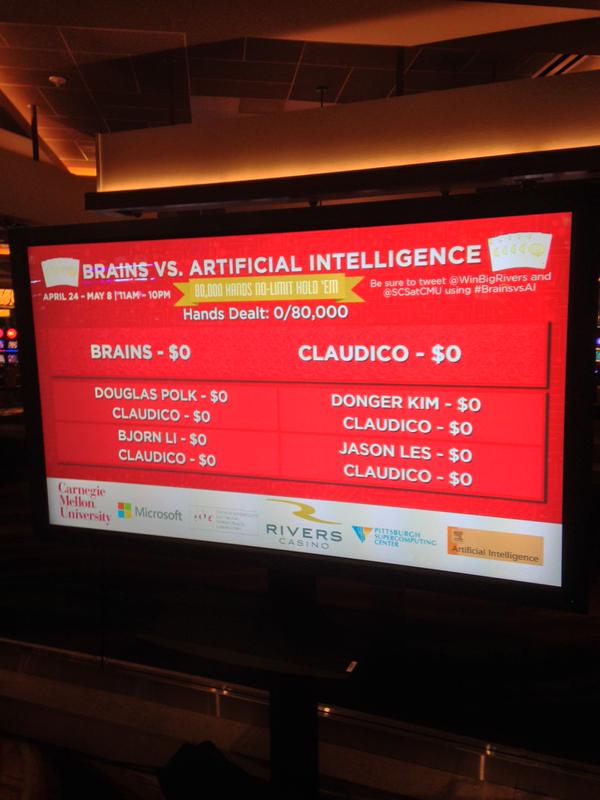 The official scoreboard page for “Brains vs. Artificial Intelligence” poker challenge, taking place right now at the Rivers Casino, in Pittsburgh. “Claudico” is a computer program designed by a team at Carnegie Mellon University, led by Dr. Tuomas W. Sandholm

An interesting exercise for those interested in games and artificial intelligence.  I released this press release after interviewing Dr. Tuomas W. Sandholm, who ran the project.

Two-week long man versus computer matches now being lived-streamed; to be featured later on “Poker Night in America” shown weekly on the CBS Sports Network

Pittsburgh, PA (April 24, 2015) — Which is superior – man or machine?  More specifically, which side would win a lengthy series of heads-up poker games, including as many as 80,000 hands, the human brain or an optimally designed software program created by one of the nation’s top universities?

Dr. Tuomas W. Sandholm, Professor of Computer Science at Carnegie Mellon University in Pittsburgh, PA hopes to solve this mystery, at least when it comes to the popular poker game known as Texas Hold’em.

Sandholm and his project, a computer program named “Claudico,” is taking on four top heads-up poker pros in a series of poker games now being held at the Rivers Casino in Pittsburgh.  The poker games will take place over a two-week period, starting today April 24th, and running through May 7th.

Nearly 11 years in the making, “Claudico” has been designed to play optimally – at all times.  Every strategic decision made by the computer is based on a complex algorithm that has steadily been revised and improved by a team of math and computer experts at CMU.  Now, Dr. Sandholm believes his perfect poker player constituted in form of a software program is ready to face the toughest human competition.  And now comes the ultimate test – actual face-to-face competition in a live cardroom.

From the research team:

Claudico’s strategy was computed purely algorithmically by Prof. Sandholm and his Ph.D. students Noam Brown and Sam Ganzfried using the Blacklight supercomputer at the Pittsburgh Supercomputing Center. Around 2-3 million core-hours were used to compute the strategy.

Four poker pros have been chosen to face what might be the toughest poker competitor ever created.  The humans are – Doug Polk, an online cash game pro with $3.6 million in live tournament winnings; Dong Kim, a full-time poker pro who has been specializing in heads-up play for the past five years; Bjorn Li, a poker pro with a degree in Mathematics from the University of Chicago, who specializes in heads-up and short-handed play, and who holds a prestigious title won in Macau; and Jason Les, who holds a degree in computer science from UC-Irvine and has been playing poker both online and live against top competition for ten years.

Prior to the series of four games, which will each be played simultaneously over 14 days and will include many thousands of hands, a press conference was held on Friday, April 24th at 10 am where players and programmers were interviewed.  Games began at 11 am EST.  Once the challenge is completed, an awards ceremony will take place at Rivers Casino, on May 8th.

The entire spectacle will be carried on a live stream, at Twitch TV (twitch.tv).

The following accounts have been created for use during the event:

Each broadcast can be found at:   twitch.tv/[account]

For example, go to:  twitch.tv/Claudico_vs_DougPolk.

All broadcasts will be on a 30-minute delay.

Viewers may tune in anytime (play is scheduled for 8 hours daily – from 11 am until 8 pm, including breaks for humans).  For more information, and follow up data please visit:  http://www.pokernight.com/

BEST LINK:  You may also visit the official Rivers Casino webpage with lots more material and background information about this unique project.

Note:  All media may use this press release in any way, either fully or in part.

Further inquiries may be directed to: