Babbo is an upscale Italian restaurant in New York City’s West Village on Waverly Place, just steps away from Washington Square Park.  A few nights ago, I dined there with three of my dearest and most respected friends — Stevan H. Goldman, Steve “Ice” Eisenstein, and Peter Alson.

While it’s entirely inappropriate to sum up these complex men’s lives in a simple sentence or two, at the risk of offending those who I least want to offend…Goldman owns a very successful private company, Eisenstein is one of New Jersey’s most well connected and sought-after attorneys, and Alson is a New York City-based writer and longtime friend who just so happened to be my collaborator on the Stu Ungar biography, “One of a Kind.”  Oh, they are also all people who I have met while playing poker and known for at least 15 years.

Of the multitude of great places to dine at in Manhattan, Goldman picked out Babbo, a Mario Batali (and his partner Joe Bastianich) coronation, one of a growing stable of modern Italian chic spots where you won’t find staples like spaghetti nor lasagna on the menu.  Think classy Italian, which isn’t to say Northern Italian.  Tuscany Italian, I suppose, would be the right description.

Babbo didn’t disappoint.  It’s your typical way-to-small-for-the-big-crowd attraction where there’s a coat check girl, an elusive bartender who’s constantly busy shaking and pouring house specials made of a mix of cordials with a $16 price tag, crystal wine glasses atop tiny tables with white tablecloths, a dimly lit room, extraordinary cuisine, and perhaps a dozen interesting table conversations by interesting-looking people all around which tempt some serious eavesdropping.

My starter consisted of the fresh arugula salad smothered in a delicious mustard dressing, perfectly savored with the help of shaved radishes.  I opted for simple on my main curse, by ordering a rich and spicy Pappardelle Bolognese.  Although intentionally straightforward and certainly a challenge to wow the taste buds, I rank this pasta dish in the top three of the best paisano-type dishes I’ve had (read — marina, meat, and pasta).

And although not a big fan of Batali even though on more than one occasion I’ve actually been mistaken for him (I thought that was a compliment, at first), I rank this place as his very best, at least from among the dozen or so trattorias and fine dining establishments that I’ve tried.

Eisenstein picked out the wine because that in addition to other things is what he does best.  When Eisenstein picks out wine, it’s going to be either very good, or great.  And although he’s ordered plenty of $800 bottles of wine on even less-than-special occasion, he’s the grandmaster of finding that affordable sweet spot, wines priced at between $60-$120.

On this modestly special evening, Eisenstein ordered an Italian wine, one which I routinely would never order nor drink under any circumstances.  We engaged in a lively discussion about wine when paired with food, and as a self-admitted heretic who always drinks wine alone (I mean without food, people around me are sometimes tolerated), I became converted for once to the melding of fine wine with even finer cuisine.  Chalky tannins which otherwise would have caused me to protest softened the tangy zest of Arrabiatta-like sauce topped with shaved Reggiano cheese.  In short, the paring was perfection.

The two-hour dinner was topped with an unusual dessert — something called Pumpkin Budino with Maple Cream and Spiced Fat Boy Breadcrumbs.  Wow.  My only complaint — too small.  Heaven would be if this dessert was somehow served in an aquarium.

Service was hands-on, but not obtrusive, and never snooty. 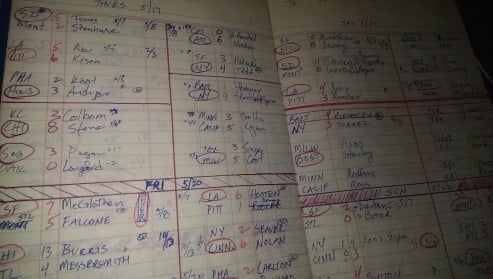 To this dinner, Steven Goldman trucked along with an old notebook, packed with shopworn pages and a cover that had seen better days long ago.  See photo above.

Written inside it, Goldman showed us something remarkable.  He’s kept track somehow of every single sports wager he’s ever made, dating back more than 40 years.  On these hallowed pages littered with wins and losses and rainouts and bad beats and wild games, are the names of each starting pitcher — Vida Blue facing John Candelaria…Jim Kaat pitching against Andy Messersmith.  There’s football and basketball, too.  Anything that for whatever reason triggered a wager.

I tried keeping a notebook with my sports bets once.  But somehow over time it became less of a priority and was eventually discarded.  To maintain enough discipline to keep accurate records — never lying to yourself by skipping a bad day — is pretty impressive really.

I tell this story because the following day, without foreknowledge, I would end up spending an entire afternoon with legendary sports better and poker player Mickey Appleman.  Unaware of Goldman’s notebook or what had happened the night before or of the discussion that ensued about this topic, Appleman told me, “always keep records.”

“To be successful you have to know what you’re doing right and doing wrong,” he said.

Seems to be good advice when it comes to just about anything, wouldn’t you agree?  And since I can no longer keep records of losing sports wagers I’ve made, for that would end up more of an encyclopedia and I missed way too many boats long ago, I, fortunately, can at least maintain some records of my memorable dinners and even finer friends.  This serves to give this mish-mash of musings and clumsy opinions a more noble purpose, I think.  That others who were not there, were in fact, there.

Unintentionally, but aptly named, it’s the site of the infamous 1969 raid by police and subsequent riots which largely became the launching point for the world’s first gay-rights and equal opportunity movement for people who previously had been forced to conceal secrets of who they really were.

All movements seem to have a place meriting remembrance.  For another wave that occurred some years earlier, it’s the steps of the Lincoln Memorial where Martin Luther King gave his famous “I Have a Dream” speech.  The Stonewall is in essence the very spot where some very brave people finally stood up — not just for their rights, but for the very fabric of all human rights.  Then and there they proclaimed we’re here and proud of who we are and not only that, we also demand the same equal rights and protections guaranteed by laws to all people.  We will no longer hide.

The West Village is filled with great music, including some of the world’s best jazz.  ‘Round midnight, we all went out and enjoyed a taste of one of the local clubs.

After that, Goldman and Eisenstein went on their way.  Alson and I went to another local bar and enjoyed a nap cap of conversation and inspiration.

Indeed, the best people and places do two things.  The best people — including those we know and even those we don’t but who we read and observe — and the places — the cities and sacred places, be they parks or bars or restaurants or jazz clubs — deliver us gifts.  Those two things are that they enrich us.  And, they inspire us.  They motivate us to do things within ourselves that we thought were not possible.

Great people and places do that.