Posted by Nolan Dalla on May 16, 2019 in Blog, Essays, Las Vegas, Music and Concert Reviews | 0 comments 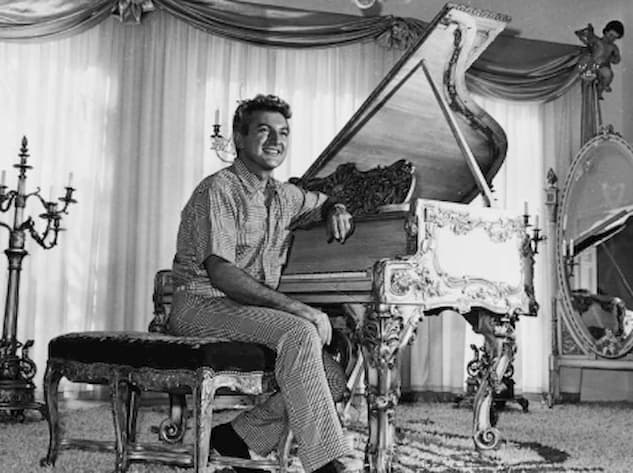 I don’t give concerts.  I put on a show.

Last Sunday afternoon at 2 pm, the Windmill Library in Las Vegas offered a free musical performance and verbal retrospective in remembrance of Liberace, the late flamboyant showman-pianist, who died 32 years ago.

I suspect most of us who attended expected perhaps only a few dozen locals might show up.  After all, Liberace disappeared from the Las Vegas stage a very long time ago.  An outdated museum dedicated to his life shuttered in 2010.  So, I wondered with some justification — who remembers Liberace?

Remarkably, “Liberace Lives!” — a celebration of the master showman’s life and music — attracted more than 500 attendees!  About 50 people or so had to be turned away at the door at the performance center.  Come to learn, an identical performance held at another library during the previous day also drew a packed house and an overflow crowd.

What magic spell is still cast by this campy entertainer who never sang, didn’t compose any significant music, couldn’t dance, never used a light show or had an orchestra and whose entire stage show pretty much consisted of a pudgy aging man with a bouffant hair dew dressed in some absurd costume straight out of the Renaissance while sitting at a piano for what would seem to be an excruciating 90 minutes?

That’s the great mystery I shall attempt to solve in today’s article.

Indeed, the timing is perfect.  Today, Liberace would have been 100-years-old.  He was born Wladziu Valentino Liberace in West Allis, WI on May 16, 1919.  The son of Polish and Italian immigrants, Liberace was known as “Lee” to his friends, and “Walter” to his family.  But later, the performer became better known to millions by the singular name, Liberace, the first American entertainer to establish a popular trend later copied by Madonna, Prince, Pink, and countless icons.

The remembrance held at the library taught me many remarkable things about Liberace.  So, I thought I’d share them now with you.  Here are a dozen facts you probably didn’t know about Liberace:

[1]  During the mid-1950s, Liberace was the highest-paid entertainer in the United States, and perhaps the entire world.  He had a successful nationally-television variety show.  He also earned a whopping $50,000 a week at the Riviera for one Las Vegas’ first extended residencies.  That’s equal to about a million dollars per month in today’s money.

[2]  A decade later, Liberace moved his act over to the more spacious The International showroom (later the Las Vegas Hilton, now the Westgate).  Every one of his shows sold out.  For a time, his opening act was a young female singer named Barbra Streisand.

[3]  Liberace was vilified by critics for his piano playing style and unapologetic showmanship.  He was often accused of being way too glitzy with little musical substance.  Critics noted that he didn’t compose any original music.  Liberace’s counterargument was he brought classical music and old American standards to millions of new listeners.  He’s often credited with demystifying the greatest classical compositions for much broader audiences.  He was one of the first stage performers to completely obliterate siloed musical tastes.  In fact, Liberace included nearly every genre of music in his Las Vegas stage show.

[4]  Liberace had hundreds of fan clubs throughout the world, 200 at one point during the height of his popularity.  Later in his career, his most loyal fans consisted of older women, with whom he had established the oddest of connections.

[5]  Liberace stories are the stuff of legend.  While rehearsing one afternoon for his temporary residency at The New Frontier around 1953, an unknown man observed the virtuoso from the wings offstage.  Liberace wasn’t at all pleased with the lighting and asked the tall man to help with repositioning a few spotlights.  The man silently complied with the pianist’s request.  That man turned out to be Howard Hughes.

[6]  Before morphing into a legend, Elvis Presley was mostly known as a teen idol during the 1950s.  While playing a few shows in Las Vegas, during one night off Elvis attended Liberace’s performance at the Riviera.  He saw the pianist wearing a glittery jacket that was so flashy it completely dominated the showroom.  Elvis was so impressed with the spectacle that he too began wearing sequined jackets in his act and later adopted the flashy jumpsuits that Liberace pioneered as a Las Vegas performer, years earlier.

[7]  Liberace’s stage show became increasingly over the top nearly to the point of self-parody and camp.  He overtly displayed his wealth, fawned over royalty and other celebrities, and even wore heavy fur coats while onstage, despite the bright lights and oppressive Las Vegas heat.  He drove into the showroom while chauffered in the back of a mirrored Rolls Royce (driven by his live-in lover, the boyish Scott Thorson).  Liberace doddered across the stage adorned in a full white mink stole with a tail more than 20 feet long.  As he paraded near the front row of worshippers, Liberace’s stock stage line was “go ahead, have a feel, there’s enough fur there for all of you.”

[8]  Liberace is credited with the famous line, “I laughed all the way to the bank.”  When critics ripped his act and he was asked for a reaction, Liberace frequently slung the revengeful reply.  Later, during an appearance on The Tonight Show in an interview with Johnny Carson, Liberace really stuck it to his critics.  He snapped: “I don’t cry all the way to the bank anymore – I bought the bank!”

[9]  Liberace won a multi-billion dollar defamation suit against a British tabloid after the magazine claimed the pianist was gay in the 50s.  Incredibly, Liberace denied the claim and ultimately won his lawsuit, despite the obvious fact the allegation was true.  While Liberace couldn’t “come out” given the restrictive times and repressive norms of the day, and certainly would never have enjoyed vast success had his homosexuality been widely known, his adoring fans never seemed to care.  Nonetheless, to this day, Liberace remains controversial among gay activists.  He never acknowledged being gay, despite actor Rock Hudson being the far braver as the first Hollywood legend to announce his sexuality months prior to dying of AIDS.  Liberace died in a similar vein, 18 months after Hudson, but still denied being gay until his last dying breath.

[10]  In life and even in death, Liberace was the ultimate contradiction.  He was a flamboyant showman, who lived just as extravagantly while offstage.  Yet, he was devoutly religious and remained a practicing Catholic throughout his entire life.  Liberace was very conservative politically.

[11]  After Liberace’s death, his wealth funded thousands of college scholarships for students interested in pursuing careers in music.  His estate bestowed millions, much of the money going to students in the performing arts at UNLV.  His generous endowment continues to support students and musical programs.

[12]  Liberace’s stage shows often concluded with the most unusual fanfare possible.  He didn’t simply disappear backstage and then leave, as is normal custom.  Rather, after performing his final song, he invited his audience up onto the stage to touch his clothes, sit at his grand piano, and even try on his flashy jewelry.  He posed for tens of thousands of photos with his fans, often with handshakes, hugs, and kisses.

Liberace remains a Las Vegas legend.  He’s a musical icon.  He’s well worth remembering today, on the centennial of his birth.