Ireland: A Tour of the Waterford Crystal Factory

Most people have heard of  Waterford Crystal.  It’s the best crystal in the world and the ultimate symbol of both excellence and craftsmanship.  I toured the factory recently and have this report to share.

Ireland: A Visit to Altamont Gardens

Nothing tops nature.  Not the Las Vegas Strip.  Not the Manhattan skyline.  No man-made object can possibly surpass the splendor of nature’s abundant power and beauty.  Borrowing a famous line I once heard somewhere — You think a tall building is impressive?  Try making a butterfly from scratch.  You can’t.

The Cliffs of Moher are one of Ireland’s most visited attractions, and it’s easy to see why.  There are two ways to see the towering rocky ridge — either by sea or from high above overlooking the sea.  We opted for the sea journey. 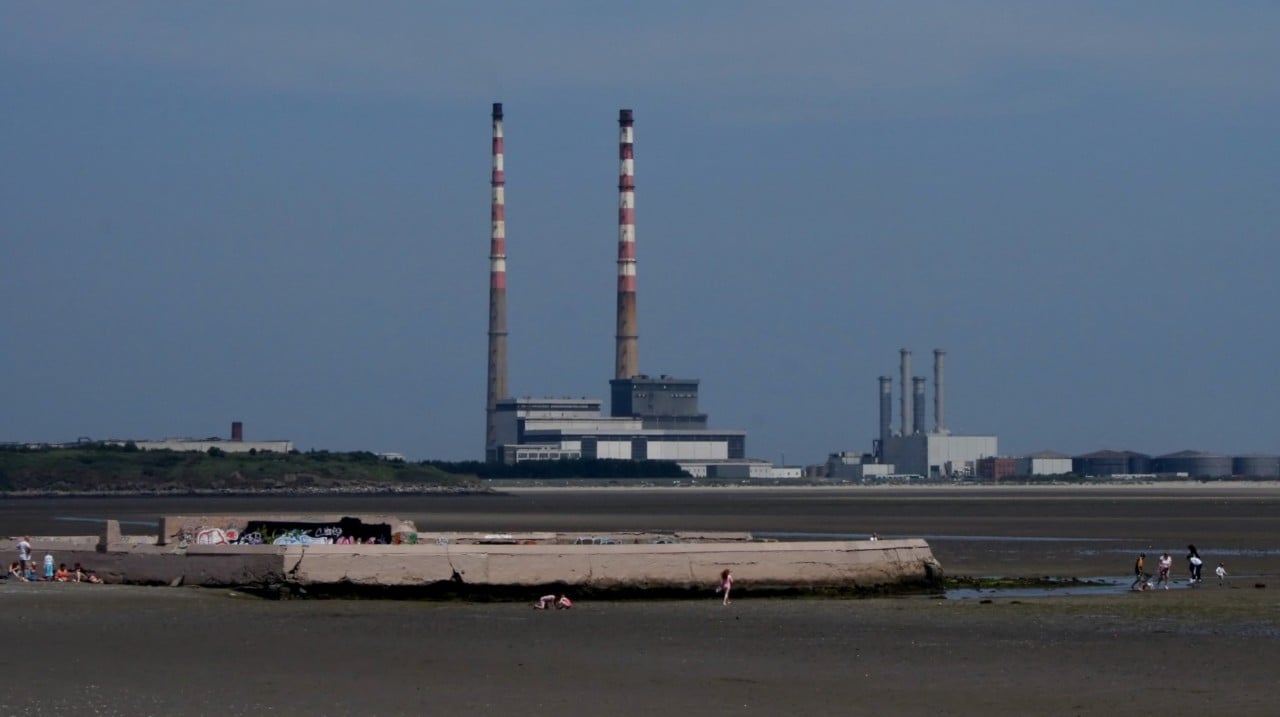 For those of us of a certain age, raised on a steady diet of MTV (when music videos were played exclusively), many of us will remember U2’s huge breakthrough hit, “Pride in the Name of Love,” recorded in 1984 which came off The Unforgettable Fire album, a masterpiece.

Restaurant Review: The Sussex (Dublin, Ireland), a Five-Star Dining Experience at a Fraction of the Cost

Five-star dining is too often associated with stuffy ambiance and snooty service, at astronomical prices.

Hence, what I seek out isn’t just the quintessential five-star meal — which is always available if you’re willing to go broke while parsing over predictable continental menus and ridiculously marked-up wine lists — but the near-perfect dining experience combined with an affordable cost.  Call it my culinary Holy Grail.

Earlier this evening, I found just such a place in Dublin (Ireland), which is named The Sussex.  Located within a short walking distance of the Doubletree Hotel by Hilton in Dublin 4 on Upper Leeson Street (in South Dublin), this small gem of a hearty yet healthy restaurant is located above a local tavern and is a rare find in what’s become a highly-competitive urban restaurant market, with newer places vying for distinction and attention.

Part of the appeal of The Sussex is that not that many people seem to have discovered it yet.  On the two nights we came by, tables were available, while similar-priced restaurants in the area had long waiting lists.  One can only presume that many prospective walk-by diners confuse the location, which is easy to do since it’s positioned above a busy pub named “O’Brien’s.”  However, the dining room is completely separate from the cozy and often crowded tavern below, up a flight of stairs in a brightly lit front room.

In my span of three years reviewing restaurants in multiple countries, I don’t recall using the term “perfection” ever to describe more than a few of my experiences.  Yet, perfection is the proper word that conveys being totally overwhelmed by all courses, the house-made special beverages, the atmosphere, the overall level of service, and the relative value compared to what one would expect at these prices.  The Sussex not only provides the ideal meal but the perfect dining experience.  It was extraordinary.

Before going into more detail, first a few comments about similar restaurants in the area.

The Canal Street Café is located right across the street.  This restaurant came highly recommended and didn’t disappoint us.  Fairly Spartan in the atmosphere, with no frills — so if the ambiance is important to you, skip this place.  But the food was both fresh and excellent.

Around the corner is the Farm Restaurant, which (as one might guess) specializes in the growing popularity of what’s called the farm-to-table experience.  The menu lists the names of farms and local suppliers for every ingredient served.  For an American palate accustomed to industrial food production and produce which simply lacks in full flavor, the Farm Restaurant gave us a wonderful explosion of vibrant tastes.

That said, The Sussex was even better, in every way.

Now, to our meal and experience…

The Sussex has no more than perhaps two dozen tables — all on the second level atop a narrow staircase.  We arrived at 5;30 pm on a holiday evening and were only the second party to be seated.  By the time we departed about 70 minutes later, about half of the tables were filled up.  The dining area is warmed by a fireplace and is perfectly lit.  Romantic?  Yes.  Cozy?  Yes.  A good place for a large, loud party?  No.  So, that’s another of its attributes.

Service was extraordinary.  We were given attentive, watchful observation without being too intrusive courtesy of Robert Kosiba, who is a Hungarian immigrant who has been living in Ireland for the past seven years.  Check out Robert’s work.  Aside from hosting and serving great food, he also does photography and has his own website which is worth checking out:  WWW.ROBERTKOSIBA.COM.

Robert informed us that the two younger owners of The Sussex intended to create what they call a “New Irish” cuisine, taking the freshest ingredients and traditional recipes and updating them with a much healthier twist.  They succeeded.

So what does this all mean?  Please read on…

Let’s start with the amazing bread.  I know, bread normally doesn’t get most people excited — and that’s because most of the bread served in restaurants is bland, without any distinguishing characteristics.  However, the bread served up at The Sussex is a very coarse, even gritty, which is baked fresh daily, and seems like what one might have enjoyed a century ago in the countryside when bread with hearty grains wasn’t necessarily an art form as much as a dietary staple.  Naturally, this outstanding bread was served with fresh Irish butter.

I could have wolfed down two loaves and left perfectly satisfied.  But, I digress.

We ordered the three-course set menu (fixed price dinner), which cost 27 euros per person.  Anyone who has spent time in Europe knows that to be beyond affordable for a nice restaurant.  An appetizer-salad was followed by the main course, which was topped off with dessert.

But first, the house cocktail… 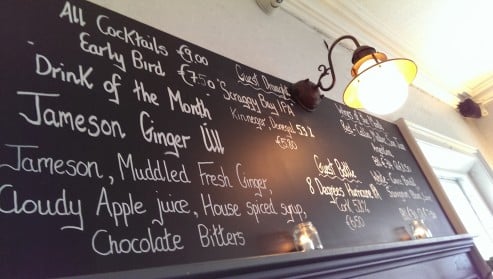 Jameson (whisky) is king here in Dublin, so as the saying goes, when in Dublin…

We enjoyed a house specialty called the “Jameson Ginger,” which is posted above along with other nightly specials.  Three words — to die for.

We both ordered a salad made of fresh beets, goat cheese, watercress, and hazelnuts topped with a delicate mustard-flavored dressing.  The trouble with this salad was — I’m not sure it’s possible to make a better tasting, healthier, more blended mix of ingredients.  It was awesome.

Next, our main dishes arrived.  Marieta ordered the traditional Irish entrée known as “Shepherds Pie.”  We have a derivative of a similar dish served in the U.S., but it sure isn’t the same authentic blend of lamb, mixed with vegetables, topped with mashed potatoes, and then baked together again, and perfectly seasoned.  That came with another type of salad.

I ordered a sirloin, with chili and garlic broccoli, along with fries.  This was certainly the most tender sirloin I’ve ever had (not a cut normally associated with quality) which had a free-range taste to it.  Again, meat that’s processed and cooked the old-fashioned way sure beats industrialized food production we now accept as normal but is anything but normal.  My dinner was served on a cutting board, which just added to the old-world, traditional feel of the place.

For dessert, we both enjoyed something we were not familiar with — called “Lemon Posset” topped with seasonal berries.  The concoction was served cold with a mint leaf.  The only comparison I can make here is an Irish version of Panna Cotta (one of my favorite dishes).  However, the zesty lemon taste combined with the tanginess of the berries gave this an even superior flavor.

The total bill with beverages, three courses, tax, and service came to 75 euros (about $87), which was not just one of the best values I’ve ever seen but also a nearly perfect healthy and satisfying meal which merits the highest possible rating.

Too often, those of us who write restaurant reviews are motivated by our passions when things do not turn out quite as we expected.  In the case of The Sussex, this dining established far surpassed what I expected, especially given its quirky location above a tavern and remarkably affordable prices.

Trip Advisor Ratings and Reviews at THE SUSSEX (DUBLIN)

READ: Ten Things About Ireland that Surprised Me