Posted by Nolan Dalla on Oct 8, 2012 in Blog, Music and Concert Reviews | 0 comments

Searching for Sugarman: Rodriguez on ’60 Minutes’

There are rare few moments of great television.

Last night offered us such a moment.

On CBS’ “60 Minutes,” the long lost hermit singer-songwriter Rodriguez was featured in the third segement.  This was one of the most heartwarming and inspiring stories I’ve ever seen on a program that has given us many extraordinary memories over the years.

The segment told the remarkable story of a long-forgotten folk singer from Detroit, simply named Rodriguez.  Forty years ago, he made two albums, both of which bombed commercially in the United States.  So, Rodriguez essentially quit the music business entirely and spent the next three decades working as a day laborer.  He stayed poor, living in a run-down shack outside of Detroit.

Meanwhile 15,000 miles away on the other side of the world, his records somewhow caught on in the nation of South Africa.  During the fall of Apartheid, he unknowingly became a huge star, although he never received a dime in royalties nor knew of his fame in that faraway land.  South Africans who knew every song and rang Rodriguez’s lyrics presumed he was dead.

But Rodriguez was very much alive.

This remarkable segment tells Rodriguez’s life story, which eventualy led to a movie which is out now called “Searching for Sugarman.”  The tale of how the movie, which debuted this year at the Sundance Film Festival, came to be is just as moving emotionally — shot largely on an iPhone by a one-man production team with no budget led by a broke Swede, who heard about this amazing Cinderella tale and decided to make a film which has now changed both of their lives.

If you cherish the notion that art is not a commodity but a state of consciousness, or if you simply want to sit back and enjoy a great story, I urge you to watch this clip: 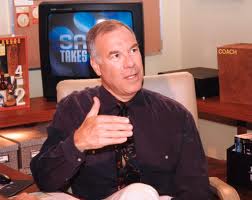 Pro football lost a giant of a man today.

He wasn’t a player.  He never coached.  You rarely saw his face.

But you must certainly know his astonishing body of work which spanned more the four decades, and which left an indelible impression on the game that’s now been America’s real ‘national pastime” for two generations.

Steve Sabol was the architect of NFL Films.  Together with his late father, Pro Football Hall of Fame inductee Ed Sabol, the first family of NFL historians made football into something far more than just a game.

They made football into art.  Their productions were grand theater on the gridiron.  Many of their shows were inspirational and epic.  Everything they did set the bar higher, not just in sports journalism but in all media.

Their narrative often accompanied by blaring trumpets, NFL Films programming was often better than the actual games they covered.  They created legends out of players and coaches most of us had never heard of.  They tore down myths.  Indeed, Steve Sabol wore many hats — writer, historian, filmmaker, journalist, announcer and marketer.  Everything he did showed pro football in a more interesting light.

Steve Sabel’s body of work is extraordinary.  Dating back to his early days as a rival-league AFL cameraman during the mid-1960s, Sabol used his natural talents and creative energies to push the bounds of sports coverage into something grander and greater.  He not only helped to transform many athletes into heroes and legends.  More important, he made them human.

All NFL fans everywhere owe a great debt of gratitude to the late Steve Sabol.  He passed away today at the age of 69.

XXX-Rated Curiosity — Who Writes the Smut?

I wonder if this is a movie about eating hot dogs?

It was an accident.

I swear.  An accident.

While sitting in my hotel room alone late at night with the remote control in hand, I must have punched the wrong number.

It can happen to anyone, right?