My Interview with the Duke of Fremont Street

The Duke of Fremont Street is a cathedral to class.

If you’ve been around Las Vegas for any length of time, it’s likely you’ve seen the dapper gentleman dressed to the limit.  If not, then perhaps the 1938 Cadillac caught your attention.  From his earliest origins spent gambling along the Mississippi River all the way to the bright lights of the Las Vegas Strip, the Duke has been there and always seems to be closing a deal.

In this 25-minute interview, I sat down with the Duke where we talked about his life, what he thinks of Las Vegas and casinos today, and where he thinks we’re all headed.  No surprise, the Duke delivers.  He holds nothing back.  He sounds just as cool as he looks. 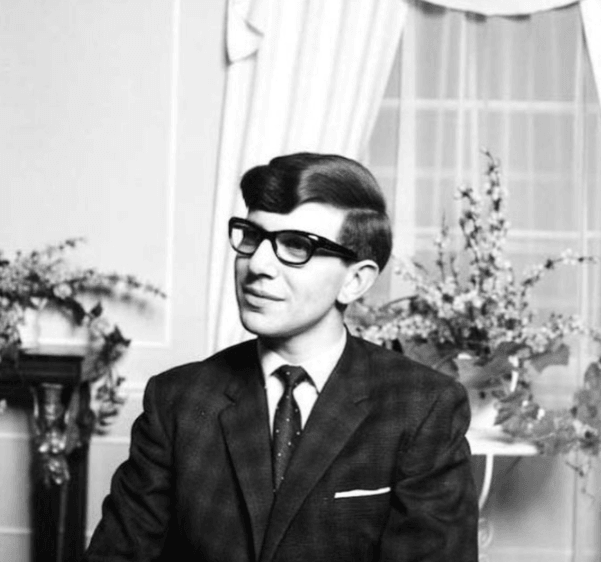 Intelligence is the ability to adapt to change.

Movie Review: All the Money in the World

“All the Money in the World” is based on the real-life 1973 kidnapping and ransom of John Paul Getty III, then the grandson of the world’s richest man.

Walking into the Golden Steer is like visiting the ghosts of Las Vegas pasts.

If these walls could talk, just imagine the stories they could tell.

The Golden Steer has been in business for like — forever.  It’s a really weird location, helplessly bookended into a seedy strip mall right off Las Vegas Blvd., on Sahara.  A few doors down there’s a busy cigar bar that you can smell from a block away.  The restaurant, in the shadow of the new Lucky Dragon casino, is bordered by ghetto apartments.  Fortunately, there’s a spindle of rusted barbed wire atop a cinder block wall separating the slums from the Golden Steer.  That way, we can all feel safe while feasting on dead animals.

If these directions don’t make any sense, then try this:  Look for the giant sign with the fat cow out in front.  Everyone in town knows the fat cow.  Err, steer — whatever.

Years ago, the Golden Steer was the favorite hangout of the Rat Pack.  Frank Sinatra, Dean Martin, and Sammy Davis, Jr. and company used to dine here regularly.  The trio of crooners even had their own private booths (each still in place and memorialized with plaques).

The Golden Steer has undergone a sparkling facelift since my last visit a few years ago when it seemed the old cow’s best days were way behind her.  While the inner decor has been updated, it still screams “Old Las Vegas.”  You don’t see places like this around anymore because they’ve all been bulldozed and paved over by an all-too-crowded kitchen of celebrity chefs.

Now that you know a little something about the Golden Steer, here’s where the story really gets good.

While Andy, Todd, Vin, and I were solving the world’s problems last night while trying to get away from our own, the scene across from us in the opposite red leather booth caught our attention and kept us captivated nearly to the point of becoming a distraction.  About 15 feet away, a scruffy bearded man wearing a brown western hat dined with a young lady.  The man’s coat looked disgustingly filthy.  His hat was bent out of shape and wouldn’t fetch $2 at a garage sale.  If you examined this scene for no more than five seconds, you’d have made a reasonable guess the man was homeless.

No big deal, really.  This is Las Vegas.  You see a lot of weirdness in Las Vegas.

At some point, the scruffy man asked the waiter to remove a portrait from the restaurant wall (yes, I’m serious).  Then, he requested the portrait be positioned next to him and his lady friend, in the booth.  If the scruffy man wasn’t a curious sideshow to watch before based on appearances, well now he had our full attention — at least as much attention you could muster without turning into a gawker.

So, the large framed portrait of a movie star was nestled into the booth while the scruffy man feasted on supper.  It was hard to tell who this was exactly in the picture, but after some artful eye-dodging, someone in our party finally recognized the portrait was of the late actor Charles Bronson.

The scruffy man, the lady friend, and Charles Bronson’s portrait all seemed to be quietly enjoying themselves, although Bronson didn’t say much.  Bronson also didn’t eat or drink anything.  Those delicious delights were left to the other two, who emptied at least one bottle of expensive wine followed by a bottle of champagne.  I tried to catch a glimpse of the labels to see what they were drinking, but I didn’t want to seem too nosy.  One can only gawk so much without causing a scene.

Of course, we had to play the whispering game of speculation.  Who in the hell is this guy?  He sure looks like a pauper, but he’s dining in a fancy restaurant, guzzling down wine and champagne.  Who could make such a wild request to have a portrait removed from the wall — and then have that request honored by the staff?  And the woman really seems to dig him!

The owner of the restaurant?

Just as we were preparing to leave, the scruffy man and his friend got up also.  They made a swift bee-line for the front door, hopefully not leaving stoic and speechless Charles Bronson to pay the bill.

Consumed by curiosity, we stopped the waiter in mid-stride cold in his tracks.

“Who in the hell was that scruffy guy in the hat?  Do you know him?” we asked.

“Oh, that was Nicolas Cage.  He’s a regular here.  He comes in all the time.”

If great comedy requires courage, then Roger Rodd is the bravest of souls.

The versatile Los Angeles-based comedian and actor, perhaps best-known for his anti-politically correct stage act and topical rantings on current events which are posted almost by-the-hour on social media, reveals an unshakable chasm between what we so often think versus what we often can’t say.

On cue, Roger just comes out and speaks his mind anyway.  He’s even willing to risk offending some people, convinced that hurt feelings are best tranquilized by the sound of laughter.

Consider one of his trademark professional endeavors, which is guest appearing at various “Black clubs” around the country, which is to say venues that cater primarily to African-American audiences.  This is where Roger is at his wicked best.  Nothing in the script gets changed.  No part of the act is toned down due to sensitivity.  Roger walks that razor-thin edge between humor and being offensive like a high-wire trapeze artist.

Of course, sometimes he falls.

Like any risk taker, some might think that Roger crosses an invisible and ever-changing line on what’s tasteful and appropriate.  That’s not intended as criticism.  Instead, that’s a compliment.  To reach the very edge of the steep comedic cliff and get the best view sometimes requires stepping a little too far and then falling into the abyss.  Then, one crawls out of the pit, gets back up on his feet, learns a lesson or two, and goes right back to performing — swinging and missing and hitting plenty of home runs.  That’s Roger Rodd.

The stage act and the person are connected in many ways.  But, they are also different.  As with many comedians, there’s typically something far deeper going on within the psyche when writing and performing a comedy act, especially and edgier show.  Some might even see this as a dark place.  Other know the art of comedy as personal introspection.  The act becomes the manifestation of an insatiable curiosity about culture and society that must be explored and deserves to be pressure tested.

I’ve known Roger for more than ten years.  We first met in Lake Tahoe.  I have been a fan ever since.

Thanks to Roger Rodd for agreeing to my ongoing series, “Facing the Firing Squad.”

Here’s a short highlight reel of Roger doing stand up:

Q:  What are some of the things you stand for?

Rodd:  The legalization of all drugs, prostitution, and gambling,

Legalizing all forms of death, meaning abortion, death penalty for all who kill, and euthanasia,

Seize all churches and donate them to the homeless,

Enforce the death penalty for any form of religion, where anybody but the immediate family, gathers ANYWHERE BUT inside of their own domicile.  Humanity’s disgraceful track record of god gatherings is well founded.

Q:  What are some of the things you stand against?

Rodd:  Obstinate ignorance and denial, in the face of hard evidence.

Any religious infusion into what was designed to be our secular government.

The military-industrial complex and their “whores for hire” media.

“Blanket respect” and “blanket judgments.”  Both need to be lost or earned on an individual basis ONLY.

Q:  What living person do you admire the most, and why?

Rodd:  My mother. S he is a Great Depression-toughened member of the generation who are the reason we aren’t speaking German.

Her values and integrity run through my soul.

Q:  What historical figure do you admire the most, and why?

Rodd:  Never having known their personal lives, and knowing only their public persona, nobody qualifies.

The disparity and magnitude of those two perceptions in terms of deserving my admiration causes me to say — “Nobody.”

I used to think O.J. was a great guy.

My personal historical figure of admiration is my father.  He was a decorated WW II survivor of a Kamikaze attack with 52 casualties, who swam over a mile to shore with shrapnel buried all over his body.

When it was my turn to fight a war, there was a problem with my feet.

They were in Canada.

Q:  What living person do you despise?

Rodd:  None who are in MY personal life.  Why allow that negativity to rent a space in your head?

Regarding public figures, that’s WAY too long of a list, with far too many vying for the top slot.

Q:  If money were not an object, what profession would you chose?

Q:  What is it about yourself that you are most proud of?

Rodd:  Learning from my father how to never quit.

Q:  What is it about yourself that you’d like to change?

Rodd:  Nothing.  We all have faults but if asked the question, “Would you like to have a person like you for a friend, I’d emphatically say — yes.”

Q:  What’s the most exciting thing you’ve ever done?

Rodd:  Toss up between skydiving and making a “life or death” rescue.

Q:  What’s the most unusual time and place you’ve ever visited?

Rodd:  A Scientology camp that hired me for the day as an actor.

Q:  Name a place you’ve never visited where you still want to go.

Musician — None.  Music is FAR too overrated.

Q:  What upsets you the most?

Rodd:  The stupidity of humanity.

Q:  What would it take for humanity to reach its true potential?

Rodd:  The elimination of ALL religions.
It is THE single and most DIRECT cause of all human misery.

Rodd:  When something cannot be proven or disproven, the only sensible answer is — “I don’t know.”