PHILADELPHIA — March 12, 2015 — SugarHouse Casino will host its first-ever major poker tournament in conjunction with “Poker Night in America,” as the weekly hit television show makes its next stop at the Philadelphia casino April 26-28, 2015.  Three days of high-stakes cash games will be streamed live online and recorded for later viewing in 2015.

Poker Night in America Goes to the Movies

One of the heartaches of filming a weekly television show about poker is not being able to include many of the most interesting things that happen — both on and off the set.  Quite honestly, many terrific scenes end up hitting the cutting room floor and never get seen by the public.

Steve Lipsomb was honored recently with a special “Lifetime Achievement Award.”  The honor was presented at the 2015 American Poker Awards, held last Friday evening at the SLS Hotel in Beverly Hills, CA.  Those in attendance included about 250 poker luminaries, including 14 other honorees.

I’d like to share a few thoughts about Mr. Lipscomb, which aren’t widely known.  I’d also like to tell a personal story about a somewhat lengthy encounter I had with Lipscomb many years ago which made quite and impression on me and is indicative of the type of person he is.  It also explains, at least in part, why he was the perfect recipient for this inaugural recognition.

First, I’ll borrow a line from Lipscomb spoken during his acceptance speech.  As he was handed the award and stepped up to the microphone at the APA, Lipscomb remarked something to the effect, “just in case you’ve only been in poker five years of less, I’m Steve Lipscomb.”

To which I reply — how could we forget?

The inaugural American Poker Awards presentation was held Friday night at the SLS Hotel in Beverly Hills, CA.  The awards ceremony and a preceding all-day conference were created and organized by Alexandre Dreyfus, CEO of the Global Poker Index and the Hendon Mob.  Call this poker’s equivalent of the Oscars, which was intended to recognize the game’s most accomplished players over the previous year, as well as honor those who work the elevate and grow the game behind the scenes.

Here are some of my personal experiences and observations on what turned out to be quite a memorable day and evening:

I Want All Fortune Tellers Executed 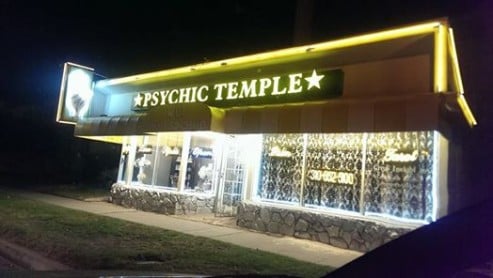 Driving down La Cienega Blvd. in Los Angeles at about 1 am tonight and while waiting at a red light, I pulled up alongside this veritable lighthouse of crime.  And that’s when it suddenly hit me.

How in the fuck are these businesses even legal?  And more important to the current discussion facing so many of us in what’s become a time of crisis, how is there an active movement and well-oiled machine to outlaw playing poker on your home computer here in the United States of America, but there’s no such even remotely comparable righteous indication targeted towards the swindlers and liars and con artists and menaces to society that make up those who run these cathedrals of exploitation?  Where are the Sheldon Adelson’s of the world on this subject?

Can someone please explain this to me?