Peter Alson didn’t necessarily choose to be a writer.  Writing and word craft was embedded early into his DNA.  Alson’s uncle was the late Norman Mailer, widely regarded as the greatest American novelist/essayist of his generation.  Being born under that emminent shadow likely should have spawned some monumental peculiarities.  Such was not the case with Alson, one of the sanest and most well-rounded artists I’ve ever met.  He’s written two well-reviewed books — Confessions of an Ivy League Bookie (1996) and Take Me to the River (2007).  He’s also co-authored two other books — One of a Kind (2005) with yours truly, and Atlas (2007).  Alson has also penned numerous articles for magazines, newspapers, and online sites — including Esquire, Playboy, and The New York Times Magazine.  Today, he resides in Greenwich Village with his wife Alice, herself a fellow writer, and their daughter Eden.  Alson’s website can be found at: www.nybookdoctor.com 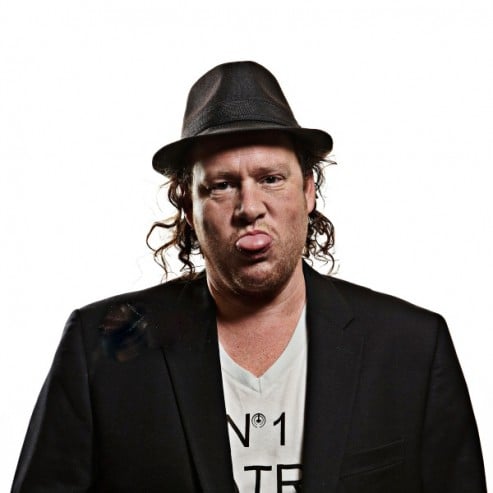 Perks and perils accompany friendship with Gavin Smith.  The perks are obvious — utter unpredictability, outlandish humor, and a perpetually open bar tab.  The perils are even more so — especially when it comes to wrecking Cadillacs.

I first met Gavin in 1996 at the Foxwoods Casino.  Back then, we played a lot of poker together (I was always the superior player).  We also engaged in a fair amount of “quality control” for the casino food and beverage department.

One of my favorite WSOP memories ever was presenting Gavin with his first gold bracelet.  It happened three years ago this week.  Afterward, I wrote up the official report.  Gavin was ripe as a melon for ridicule.  Here’s what I wrote:

On June 26th, 2010, when the local clock ticked to midnight, the shiny glass slipper fit.  It fit perfectly.  And “Cinderella” was none other than a long-haired, half-shaven, partially-balding, pork-bellied, man-child named Gavin Smith.

Gavin Smith.  His name is a permanent punch line.  Mention Gavin Smith’s name in a crowd of poker players and everyone instantly smiles.  Despite never having won a World Series of Poker gold bracelet until this memorable night, he’s been one of poker’s most enchanting personalities for a decade.

Smith’s personality is part Jack Black, part Sam Kinison, and part Ozzy Osborne — all wrapped up in a 5-foot, 9-inch dynamo of a poker player with indisputable natural talent for cards and an unparalleled passion to win.  In short, Gavin Smith was and is a living contradiction – a devoted professional when engaged in the game as well as a disorderly court jester when away from it.

If there’s anything more fun than hanging out with Gavin, it’s writing about him.  That said, his jovial nature and carefree attitude masks what’s actually a very tender man beneath all the laughter.  He’s someone who adores animals and is loyal beyond compare with his true friends.  Then again, most of his friends are animals.

Gavin Smith was brave enough to face the firing squad:

Jim McManus is arguably, some would say conclusively, poker’s most naturally gifted writer.  He penned one of the most widely-acclaimed poker books ever with his master work Positively Fifth Street, released in 2003.  He later released what many consider the definitive narrative history of poker with his 2009 release, Cowboys Full:  The Story of Poker.  McManus is also the author of five novels, one of which (Going to the Sun) won the Carl Sandburg Award for Literature.  He’s currently working on a much-anticipated semi-autobiographical novel, about the experiences of a young boy growing up in a strong Catholic family.  McManus currently lives in the Chicago area.  He is a Professor at the School of Art Institute in Chicago.  McManus is also a highly-competitive poker player with many successes and cashes, including a fifth place finish in the 2000 world poker championship.

Padraig Parkinson once thought of himself seriously as a professional poker player, until he started running bad.  He was born in Dublin, Ireland and comes with all the stereotypical Irish baggage, including a magical talent for making the contents of any bottle disappear.  A few years ago, he got fed up with the Dublin’s incessantly depressing weather and took a permanent residential sabbatical in France, much to the chagrin of his French neighbors who won’t bother to learn Padraig’s native language.  Other than natural wit and occasional charm, Parkinson is best known for his occasional success, even flashes of brilliance, as a poker tournament player.  He finished third to fellow countryman Noel Furlong in the 1999 world poker championship.  He won the U.K.’s Late Night Poker, and has made many deep runs in European Poker Tour and World Poker Tour events.  He’s won nearly $2 million in tournament poker, all of which has already been blown (and then some), he says.

A person is interesting to the degree he thinks and acts outside of himself.

The people I find most interesting are those who extend themselves beyond self-interest.  They willingly confront bigger issues and challenges.  They stand for princples.

Facing the Firing Squad is my new feature.  But guns or bullets are not allowed.  Only questions and answers.

This idea came from a suggestion by my longtime comrade known as “El Tontoligo,” the Jewish Spaniard raised in France who became an American and now lives in Los Angeles.  I know — that’s a blender full of issues.  By the way, “El Tontoligo” essentially means “the village idiot.”

The basic concept was to borow the “Proust Questionnaire” from Vanity Fair and fire my own set of questions to the most interesting people I know, and even some I don’t know but hope to know better.

Brothers and sisters, ladies and gentlemen, everyone who lives and loves life — I hereby present Facing the Firing Squad.

Allen Rash was born and raised in the suburbs of Philadelphia making him genetically predisposed to painful sport fandoms.  He spent his post college years working for a major international tech company before it stole enough of his soul.  After 20 years of working the corporate life, he quit his job to start writing, travelling, and personally researching the relaxing places in the world.  Al has spent his post-corporate life working and writing for Full Tilt Poker, Epic/GPI, PokerStars, Pokerati, PokerListings, and several other short-term projects.  While Al still calls Philly his home, he would much rather spend his time in Key West or New Orleans or any place near a big body of water.  He enjoys big-game fishing, day-time bacchanalia, and will watch any baseball put in front of him.  Al can be found writing about poker during his work hours and has a long dormant novel that needs work before anyone lays eyes on it.  Al can be found on Twitter at @AlCantHang and his writing on any site which picks up his freelance option throughout the year.