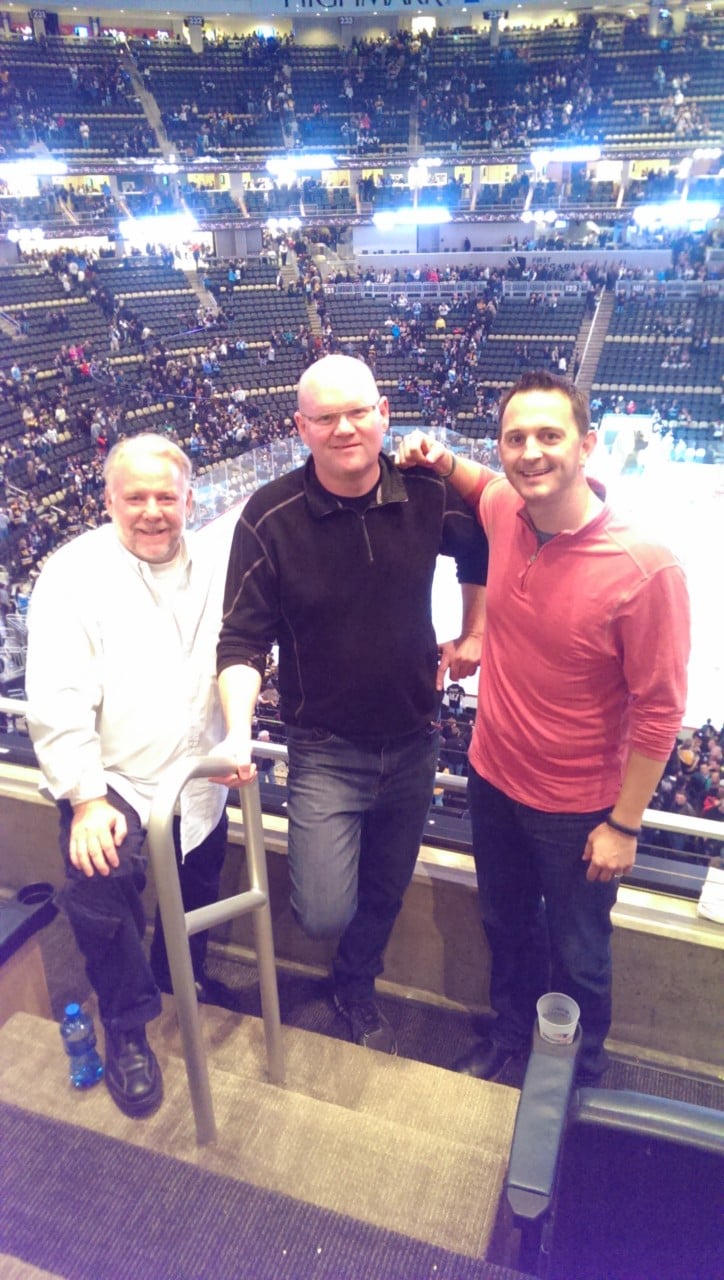 Tonight, I attended and NHL game with Todd Anderson, Chris Hanson, Greg Mueller, and Phil Hellmuth.  We had amazing seats, mid-center ice inside a private box, about 30 feet away from Penquins’ owner, the legendary Mario Lemieux.  Best seats in the house is an overused cliche, but these were the best seats in the house.

In one of the wildest NHL games you’ll ever see, the closing moments of tonight’s New York Rangers–Pittsburgh Penguins game played in downtown Pittsburgh ended as a shocker.  It was so insane, almost half of the 18,000 fans in attendance completely missed it.  Here’s what happened.

Tonight, I attended the game with Todd Anderson, Chris Hanson, Greg Mueller, and Phil Hellmuth.  We had amazing seats, mid-center ice inside a private box, about 30 feet away from Penquins’ owner, the legendary Mario Lemieux.  Best seats in the house is an overused cliche, but these were the best seats in the house.

This would have been a terrific game anyway, even without the bizarre ending which was unforeseen.  The Penguins were behind 2-1, but tied the game with a goal in the second period.

The third period went scoreless, despite a fight and a power play opportunity for the Rangers when the Penguins had two players stuck in the penalty box.  The game went to overtime.

The overtime period also went scoreless, which next led to the shootout to decide the game.

On what we all thought was the final play of the game, the NY Rangers player shot and scored.  The Rangers won the shootout 2-1 and were declared winners of the game by a final of 3-2.  The stadium fell silent.  The lights came up.  Fans segan funneling out of the tunnels as player headed off to the locker room.  The house announcer cam on and announced the final score and said “goodnight.”

Well, just as we were about to leave a few of the Penguins players came back out on the ice.  What happened?  Next, the three referees came out onto the ice.  Next, we saw the NY Rangers stream out of the locker room and back onto the bench.  By this time, about half of the crowd had already left the arena.  Someone suspected there was something wrong with the final shot by the Rangers.  It must not have been a goal.

Indeed, that’s what happened.  Apparently, the player hit the puck twice, which is not allowed in a shootout.  But the double move happened so quickly that no one caught it, except for the scorekeeper who reviewed the final goal.  Since the goal was disallowed, that meant the Penguins and Rangers were still tied 2-2 and would have to take an additional shot on goal to determine the winner of the game.

Well, you can guess the outcome, even if your’re not a hockey fan.  I especially love the part when the announcer says, “the final score, for real this time…”

I shot this 90-second video of the final two shots and the wild celebration which followed.  Worth a look, especially if you enjoy the NHL.