When Lone Wolves Become a Pack: The Wacko Militants of the American Political Right

Here’s a list of just a fraction of far-Right extremists and what they have done.

“My supporters are very passionate.”

We don’t know yet who mailed several packages containing deadly bombs that were sent to Democratic leaders, liberal activists, and news organizations — all of which are outspoken critics of President Trump and his policies.

From the list of carefully selected targets — ranging from former CIA Director John Brennan to actor Robert DeNiro — a far-Right extremist does appear to be the most logical suspect.  But we don’t know anything yet for sure about a possible suspect.  Hence, unlike so many others out there fabricating their own version of the “news,” ignoring a mountain of inciteful hate speech, disregarding the long history of political violence in this country, and spreading wacko conspiracy theories with no basis in fact whatsoever, I’ll reserve my judgment about these deplorable acts and who committed them until more evidence is gathered.

What we do know for certain is the far-Right in this country has become militant and dangerous.  They’re openly marching in the streets.  They’re running for public office.  Hell, they’ve even been elected.

No doubt, the far-Right poses a deadly threat.  Sure, the extreme Right has always been around and been dangerous to the lives and freedoms of millions, certainly since the end of the Civil War.  But until Barack Obama was elected a decade ago, extremism had largely gone underground and went unnoticed.

Now, overt racism and acts of violence are out in the open.  Extremism is even preached from pulpits and by the President who fans the flames for his own political purposes.  Should you doubt this, read the comments section at Right-wing political websites, if you can stomach the hate (and poor punctuation).  Check out what’s posted on social media.  Look at the countless threats made to “silence” critics.  Read transcripts of the President’s own press conferences and political rallies.  They are sickening.

Right-wingers have committed more than a dozen acts of murder in the not too distant past.  Mind you, this is a conservative estimate.  Add in the number of thwarted plots and threats made by extremists, and the number is staggering.

Yet somehow, Right-wing cultists and their sycophantic media masters are desperately trying to flip the narrative.  They opt for the Big Lie.  Why tell a small lie when they can get away telling a much bigger one?  They insist — now get this — that Leftists are more dangerous.  Even the President refers to liberal activists as “a mob.”

Is this true?  Let’s examine the evidence.  Let’s look at the most deadly politically-motivated attacks on American soil which have occurred over the past decade.  But before we compile this list, let’s also make note that the deadliest terrorist act committed by an American on American soil was the 1995 Oklahoma City bombing, which murdered 168 innocent people, including many children.  The bomb planted by an extremist also injured 680 people.

Timothy McVeigh, the killer, was a Right-wing sympathizer and activist who hoped to inspire a revolt against the federal government.  He defended the bombing as a legitimate countertactic against what happened earlier at Ruby Ridge and Waco.  Fact:  When it comes to the bloody scorecard of dead bodies, McVeigh, the militant Right-winger, has murdered more people alone than all Leftists in this country combined.

But that was more than 20 years ago.  Let’s now examine just the past decade.

According to data gathered on Google, three acts of Left-wing violence have been recorded since 2008.  These acts included — [1] Floyd Corkin’s shooting of a guard at the Family Research Council in 2012 (no one died).  [2] James Hodgkinson’s shooting at several congressmen and staff in 2017 (no one died other than the gunman).  [3] Micah Xavier Johnson’s murder of five Dallas Police officers which wounded nine others, his deadly act motivated by outrage against police shootings of young Black men.

Each of these three incidents of domestic political terrorism committed by Leftists was a despicable act with no justification.  The guilty deserved maximum punishment, including death.

But let’s contrast these acts with what’s happened among the far-Right within the same time frame.  Note the concentration of violent Right-wing extremism right after President Obama took office in 2009: 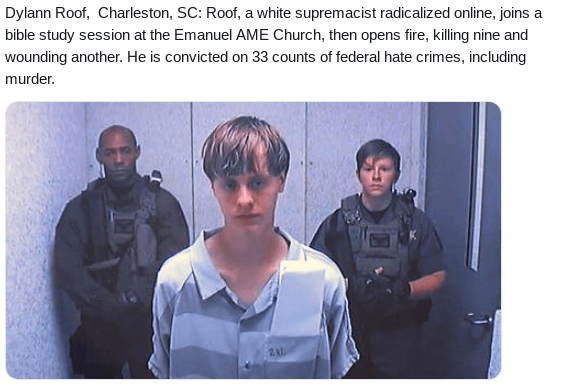 Note:  Credit for this list goes to David Neiwert, Author of Alt-America: The Rise of the Radical Right in the Age of Trump (Verso Books, October 2017).  Neiwert is a correspondent for the Southern Poverty Law Center.

Oh, and then there’s James Alex Fields. Perhaps you remember this scene of a Right-wing wacko committing murder:

TAG:  Our VIdeo Discussion on Far-Right Extremism in America