How You Can Help Save and Protect Red Rock Canyon 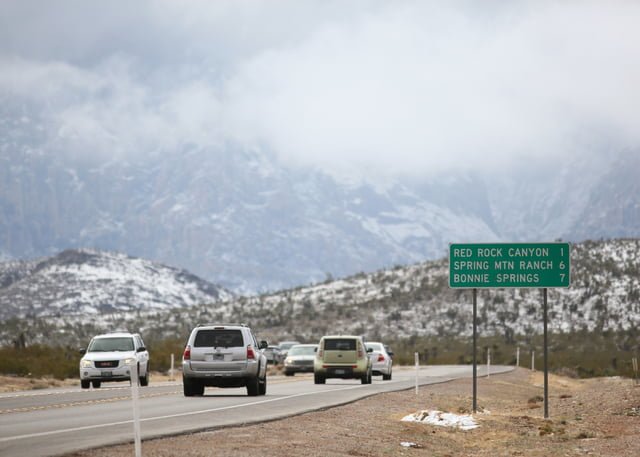 I woke up this morning to the majesty of contrasts that is the Red Rock Canyon National Conservation Area, better known simply as “Red Rock Canyon.”  Everything within sight, from the desert cactus to mountain pines, was covered in white snow.

Most Las Vegas visitors, and even many locals, may not know about the natural splendor nestled in the mountains due west of The Strip just a half-hour drive away.  Red Rock is an oasis for the mind and a vacation for the soul.  It seems light years apart from the fabricated latticework of 1.5 million people, continuing to crawl with an alarming expansion beyond the sustainable resources necessary to ensure a healthy balance between what we build and the natural world around it which cradles our city like a protective glove.

Red Rock is a vast “pause button,” ready to be hit any time, a temporary escape to a quiet place still mostly unspoiled by sprawling urbanization, except for a few roads and the occasional traffic sign.  In a city blanketed with casinos, cookie-cutter tract homes, and look-a-like strip malls, Red Rock has become our common escape, even if just for a few fleeting seconds with an affectionate gaze in the westward direction of the snow-capped mountains.  Like a seductive temptress, we long for our next encounter with beauty.

Note:  Here’s a short article I wrote last year about my hike in the canyon, along with several photos. [CLICK HERE]

Sadly, each time I’ve driven into Red Rock in recent years, commercial development looks to be creeping closer and closer to the park.  Now, when driving up Charleston Blvd., which eventually leads directly into the heart of Red Rock Canyon, it’s shocking and sad to see the extent to which homes and shopping centers have stretched to the valley’s outer boundaries and very nearly into the canyon area itself, which is now seriously threatened.  Towards the north, specifically the Lone Mountain area, commercial and industrial development has been even more aggressive.  Lone Mountain was once on the outer fringes of the west side of Las Vegas.  Now, it’s been engulfed by a freeway, thousands of new homes, and a monochrome of dust and blowing debris which seems to swirl around constantly.

South of the Red Rock area, there’s a controversial proposal by developer Jim Rhodes to convert prime land currently occupied by a gypsum mine to construct more than 5,000 additional homes, which is likely to bring in another 10,000 cars and unforeseen disturbances to the area, such as noise and pollution.  A city where air quality is marginal at best and often covered in a thick haze on bad days chokes on its own exhaust fumes.

A few nights ago, a meeting was held here in Las Vegas where many critical issues important to our region were discussed.  I was stirred into action by the presentation of Justin Jones, who’s a board member of the organization known as Save Red Rock.  I learned that this non-profit is fighting to protect one of Las Vega’s last natural resources, not just for us, but for future generations.  Jones stated if we don’t take action now, it might be too late in the future.  He also noted that big-money developers have filed a lawsuit against Save Red Rock, purely in an effort to silence opposition, thus squashing citizen advocacy and democracy.  Fortunately, many people with the local community, Democrats and Republicans alike, are now speaking out and making their voices heard.  But that might not be enough given the power of developers who look towards Red Rock as a potential piggy bank.

We aren’t opposed to responsible development.  Indeed, there are plenty of attractive neighborhoods in our city where new homes can be built and new businesses can be created.  That’s something every community needs to remain vibrant  In fact, many established parts of Las Vegas are desperate for investment of this kind, and even offer generous tax incentives.  So, why allow unbridled expansion into one of the most gorgeous areas of Southern Nevada, when so many other opportunities exist for local development and revitalization?

If you’re interested in learning more, please visit the website SAVEREDROCK.ORG.  There’s also a petition you can sign for an upcoming public hearing with country commissioners (in February), which will show your support for protecting the natural majesty of this critically important and precious public recreation area.  Consider signing the PETITION HERE.

Once Red Rock is gone, it’s lost forever.  We must act now.  Please help and also tell your friends and neighbors.  We need your voice, your signature, your support, and most of all your action.  Please do it now.