About a year ago, when I first heard that a new book was in the works on Chris Moneymaker’s seismic victory at the 2003 World Series of Poker, admittedly my eyes rolled in a cynical direction.

Even with the talented veteran freelance writer Eric Raskin doing all the research and organizing the narrative, I skeptically wondered what new territory could possibly be uncovered on an all-too familiar subject known to just about anyone who’s played a hand of poker within the past decade.  Virtually every poker narrative and film documentary created since then has already covered and rehashed the remarkable tale of the (then) 27-year-old accountant from Tennessee who’s unlikely triumph somehow managed to ignite what became known as the “poker boom,” thereby transforming the allegorical everyman into the most accidental of cultural icons.

Indeed, we’ve already been down this road many times, and once Moneymaker released his own autobiography (Moneymaker, published in 2006), that seemed to fill the final void of any curiosity remaining among peers and public which by that time had moved on and become interested in fresher stars living out new chapters.

My Interview on High Roller Radio

A few days ago I received an e-mail from Derrick Oliver-Dewan.  He’s the founder, director, and on-air personality for a new radio format called High Roller Radio.

Derrick said he wanted to interview me for his show.  I figured we’d discuss the usual topics going on in the poker world.

To my surprise, Derrick went a lot deeper than I expected, and I certainly talked a lot longer than he planned.  A radio show the customarily went 15-20 minutes extended close to an hour, due mostly to me rambling on about Stu Ungar, the World Series of Poker, Poker Night in America, and even some political issues.

Sometime later following our interview, I discovered that Derrick probably was the one who deserved the microphone, for his personal story is far more compelling — and even inspiring — than anything I’ve ever done.  I won’t steal away Derrick’s thunder.  Instead, I’ll let him tell his own incredible story at his own time.  Nonetheless, I expect he will make an excellent feature subject for an upcoming “Facing the Firing Squad.”  So, remember the name Derrick Oliver-Dewan.

In the meantime, here’s the re-broadcast of my interview today with Derrick which took place earlier this afternoon 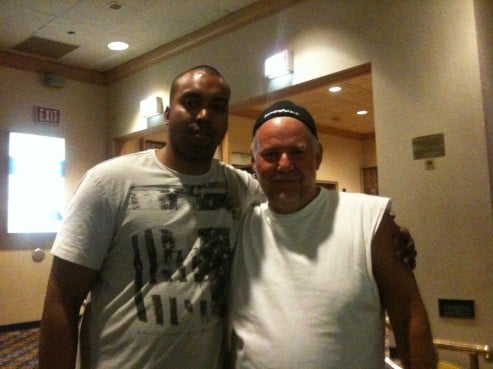 When it comes to poker, I receive far too much credit.

Truth is, gargantuan events like the World Series of Poker really run on the backs of a lot of people you never hear about, and rarely see.  But were they not to exist, then operating something as extraordinary as the world’s richest sporting event simply wouldn’t be possible.

I’d like to tell about an exceptional man I have come to know as both a trusted colleague and dear friend.  His name is Alan Fowler.

Alan just completed his final day working for Caesars Interactive Entertainment (and the WSOP).  He’s officially been a part of the WSOP ever since 2006.  Alan recently became a proud father.  He’s moving his family to Atlanta where he plans to start a new life.

To say we will all miss Alan would be a gross understatement.

A Personal Note to Readers

This time of year creates unparalleled anticipation and an equal sense of deprivation.

Being tied closely to the gambling and poker scene and living in Las Vegas, nothing surpasses working on the staff of the World Series of Poker.  I’m blessed to work alongside so many of the very best at what they do.

Looking Back: My Favorite Moments from the 2012 WSOP

The 44th Annual World Series of Poker began this week.

I initially attended the WSOP as a player, then as a writer-journalist, and finally over the past decade-plus as a tournament staffer.  If any job is a labor of love, this is it.

Many people outside of poker think of the WSOP solely in terms of the Main Event.  But it’s so much more than that.  It’s like pro football.  The Main Event is the Super Bowl.  But the other gold bracelet events are kind of like the regular season and playoffs.  I tend to like working the earlier events better, because there are so many more people with interesting stories.

Last year was one of the most exciting WSOPs in history.  Considering all the great storylines of the 2012 series, combined with some memorable moments surely to be remembered, as the 2013 events now begin, we’ll have a hard act to follow.

Here’s a look back to the personal moments I remember with greatest affection, along with a snippet from the official reports written by me, now archived at WSOP.com.  I encourage everyone who enjoys poker — playing or just watching — to visit the WSOP.com website regularly as this year’s series progresses over the next six weeks, when additional history will be made.

Let the countdown from 2012 now begin: