Dear Waiter: Thanks for Delivering My Meal, Now Please….

Thanks for delivering my meal, which is basically your whole job.

Now, please do me a favor.  Go away and leave me the fuck alone.

I dine out to eat, not talk.  Once I’m engaged in the act of consuming the food, your presence becomes annoying.  If I need something, I’ll summon you.  Or, if subtle eye contact doesn’t grab your attention, I’ll scream across the dining room.  That always tends to always get a reaction.

So long as my glass is full, my guests are happy, and there’s at least half a stick of real butter on my table, consider the first phase of your duty accomplished.  Now please, go back into the kitchen and wrap some silverware while I’m eating.  Smoke a cigarette out on the loading dock.  Talk to someone else.  Frankly, I don’t care what you do the next 15 minutes.  Just don’t blabber at me while I’m trying to eat my meal.  I came here to enjoy my dinner, not listen to you prattle on with your life story.

Talky waiters drive me bonkers.  At casual places.  With fine dining.  After waiting 45 minutes for my main course to arrive, the savory dish finally comes.  A hot platter is placed in front of me.  With a knife and fork in hand, I’m ready to attack.

Then comes — the interruption.  Just as I prepare myself for that much-anticipated first bite, the waiter drags on with his story or worse, starts another.  While he’s gabbing like a methed-up teenager, every ten seconds or so the temperature on my food drops one degree.  Two minutes of extended conversation means my once hot meal is now lukewarm.  I hate lukewarm food!

Once I lift my fork, that’s your cue.  Quit talking.  Zip it.  Scram.  I’m not paying $115 plus a 20 percent tip to listen to who you think should start at running back for the Oakland Raiders.  I don’t care.  Now get lost!  Roll that silverware.  Go smoke a cigarette.  Just don’t interrupt me or my guests.  We’ll let you know when your services are needed.  Believe me, you’ll know.

I know what you’re thinking.  A few of you are fist-pumping every word because it’s happened to you, also.  But most of you think I’m a total prick.  That’s fine.  Excuse me for wanting to enjoy my dinner in peace.

It might shock readers to learn that I used to wait tables.  Two times I worked as a waiter.  The first place, I worked at an Italian restaurant.  After I got fired, next I took a job at a steakhouse.  But I got let go from that waiter job too, for bitching about my customers, sometimes in front of them.

So yeah, I realize that serving the public sucks.  Digging a ditch in the summer heat is less stressful.  Waiters have to put up with lots of shit.  Still, the fact is, I dine out for one reason — the food.  End of story.  I rarely even drink alcohol with food.  And I won’t order wine in restaurants because I’ve got plenty of bottles of wine at home, and besides, American restaurants markup bottles at 4X.  Don’t even get me started on wine by the glass, which is stale leftovers from a bottle opened two weeks ago with a $13 price tag for a 5-ounce pour.  Screw that.

It’s the food I want and once it’s placed within my reach to my satisfaction I don’t care if Lady Gaga runs through the restaurant naked — I’m laser-focused on my plate and thinking about my palate ready to take my next bite.  These 15 minutes at dinner represents the highlight of my day, unless I somehow win a sports bet.

Attention all waiter:  Let’s make a deal, okay?  If you really want to share your long, boring story, do it once I’m finished with every course.  Preferably whilst I’m getting up from the table and exiting the restaurant in mid-sentence.  Please, go ahead and finish your story.  I’ll be out in the parking lot.  Oh, and thanks for not bothering me while I was eating my main course.  The food was delicious! 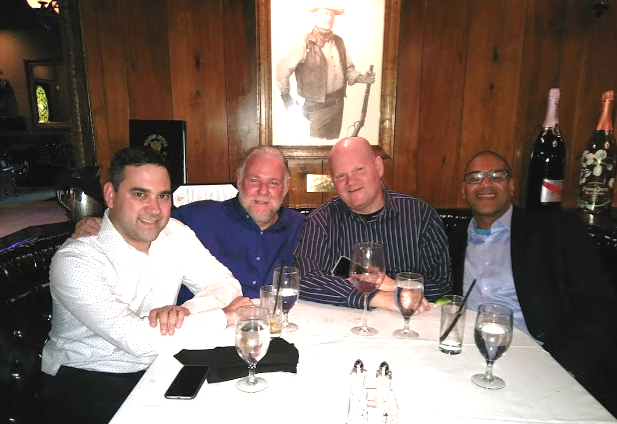 Walking into the Golden Steer is like visiting the ghosts of Las Vegas pasts.

If these walls could talk, just imagine the stories they could tell.

The Golden Steer has been in business for like — forever.  It’s a really weird location, helplessly bookended into a seedy strip mall right off Las Vegas Blvd., on Sahara.  A few doors down there’s a busy cigar bar that you can smell from a block away.  The restaurant, in the shadow of the new Lucky Dragon casino, is bordered by ghetto apartments.  Fortunately, there’s a spindle of rusted barbed wire atop a cinder block wall separating the slums from the Golden Steer.  That way, we can all feel safe while feasting on dead animals.

If these directions don’t make any sense, then try this:  Look for the giant sign with the fat cow out in front.  Everyone in town knows the fat cow.  Err, steer — whatever.

Years ago, the Golden Steer was the favorite hangout of the Rat Pack.  Frank Sinatra, Dean Martin, and Sammy Davis, Jr. and company used to dine here regularly.  The trio of crooners even had their own private booths (each still in place and memorialized with plaques).

The Golden Steer has undergone a sparkling facelift since my last visit a few years ago when it seemed the old cow’s best days were way behind her.  While the inner decor has been updated, it still screams “Old Las Vegas.”  You don’t see places like this around anymore because they’ve all been bulldozed and paved over by an all-too-crowded kitchen of celebrity chefs.

Now that you know a little something about the Golden Steer, here’s where the story really gets good.

While Andy, Todd, Vin, and I were solving the world’s problems last night while trying to get away from our own, the scene across from us in the opposite red leather booth caught our attention and kept us captivated nearly to the point of becoming a distraction.  About 15 feet away, a scruffy bearded man wearing a brown western hat dined with a young lady.  The man’s coat looked disgustingly filthy.  His hat was bent out of shape and wouldn’t fetch $2 at a garage sale.  If you examined this scene for no more than five seconds, you’d have made a reasonable guess the man was homeless.

No big deal, really.  This is Las Vegas.  You see a lot of weirdness in Las Vegas.

At some point, the scruffy man asked the waiter to remove a portrait from the restaurant wall (yes, I’m serious).  Then, he requested the portrait be positioned next to him and his lady friend, in the booth.  If the scruffy man wasn’t a curious sideshow to watch before based on appearances, well now he had our full attention — at least as much attention you could muster without turning into a gawker.

So, the large framed portrait of a movie star was nestled into the booth while the scruffy man feasted on supper.  It was hard to tell who this was exactly in the picture, but after some artful eye-dodging, someone in our party finally recognized the portrait was of the late actor Charles Bronson.

The scruffy man, the lady friend, and Charles Bronson’s portrait all seemed to be quietly enjoying themselves, although Bronson didn’t say much.  Bronson also didn’t eat or drink anything.  Those delicious delights were left to the other two, who emptied at least one bottle of expensive wine followed by a bottle of champagne.  I tried to catch a glimpse of the labels to see what they were drinking, but I didn’t want to seem too nosy.  One can only gawk so much without causing a scene.

Of course, we had to play the whispering game of speculation.  Who in the hell is this guy?  He sure looks like a pauper, but he’s dining in a fancy restaurant, guzzling down wine and champagne.  Who could make such a wild request to have a portrait removed from the wall — and then have that request honored by the staff?  And the woman really seems to dig him!

The owner of the restaurant?

Just as we were preparing to leave, the scruffy man and his friend got up also.  They made a swift bee-line for the front door, hopefully not leaving stoic and speechless Charles Bronson to pay the bill.

Consumed by curiosity, we stopped the waiter in mid-stride cold in his tracks.

“Who in the hell was that scruffy guy in the hat?  Do you know him?” we asked.

“Oh, that was Nicolas Cage.  He’s a regular here.  He comes in all the time.”

Travel Advisory! Stay Away from the Barbecue in Bakersfield!

Tasty barbecue shouldn’t be slathered beneath a pool of barbecue sauce.  That is, unless it’s a tasty sauce.

One would expect Bakersfield to be a terrific barbecue town.  The city’s outskirts are ringed with giant cattle farms in California’s Central Valley.  Cattle roam in green fields eating their way a bite of grass at a time to warm waiting plates of carnivores who are passionate about their barbecue.  If those poor beasts only knew of the horror that eventually awaits them, to be humiliated beneath a slathering of shitty barbecue sauce, they’d probably chose something different.  Then again, they can’t make choices for themselves.  Because, after all, they’re cows and besides — there’s no such thing as free will.