Tucker Carlson is Full of Shit

Occasionally, I subject myself the cruel misfortune of watching the FOX News Channel.

The Blame for All Our Problems

There are lots of reasons to be pissed off right now.

Meanwhile, we grow increasingly obese.  Much of what we eat and drink contains toxins.  Our health care costs skyrocket.  One-third of the country is suffering from a drought.

The Other Side of the Tracks

Everyone knows what “the other side of the tracks” means.

It’s the dividing line between “us” and “them.”

Railroad tracks, boulevards, embankments, power lines — they all serve useful purposes.  But where they’re placed in our towns and communities sometimes has a far more austere significance, however subtle.

In fact, they are dividing lines.  They may was well be national boundaries.  They are most certainly economic boundaries — and in many cases — racial and cultural borders.

If you happened to be born on the “right” side of the tracks (as I was), consider yourself fortunate.  If you’re on the wrong side however, then your ambition is most likely to cross the imaginary divide and overcome invisible barriers which exist to this day.

Today, I’m crossing the railroad tracks.  I’m headed to the other side.

Bell Gardens is what you would call — a city on the other side.  Mostly Hispanic now, it used to be one of the most dangerous areas of the city, as recently as 10 to 15 years ago.  Most of the shootings here were related to drug trafficking.  But those days are pretty much over now.  Today, it’s a quiet community which has undergone a remarkable transformation.  I’d even go so far as to call it a small miracle.  Yes — Bell Gardens is where I’m staying during the next two weeks, which happens to be where the famous Bicycle Casino is located.

I must confess that were it not for this working assignment at what’s come to be known to most poker players simply as “The Bike,” I’d probably stay somewhere else.  Which tells you everything about our lingering perceptions about the other side of the tracks — biases which to which I’m undoubtedly shackled.  But my previous visits here have reshaped some old perceptions.  I’ve gained an awareness for what I would have missed had I not stayed here and been forced to integrate myself into this community.  I would have missed plenty and in the end I’d have been poorer for it.  Alas, the longer I’m here the more comfortable I am within this community and the greater appreciation I have for the people who live here.

Thought for the Day: Throw Out All Immigrants?

The time has come to get rid of all immigrants!

That’s right — throw them out!

Who do they think they are — taking over our country?

Millions of foreign-looking people arrive on our shores without ever being invited.  They hang onto their old customs.  They won’t speak our language.  They refuse to assimilate into our society.  They take over our neighborhoods.  They steal our jobs.

I don’t like what these new immigrants are doing to our nation.  Wherever they go, crime increases.  Wherever they live, filth and disease follows.  They bring guns, drugs, and violence.

Oddly enough, these same toxic words could have written back in 1830 by someone else.

I wonder what this man would think about the issue of immigration in America: 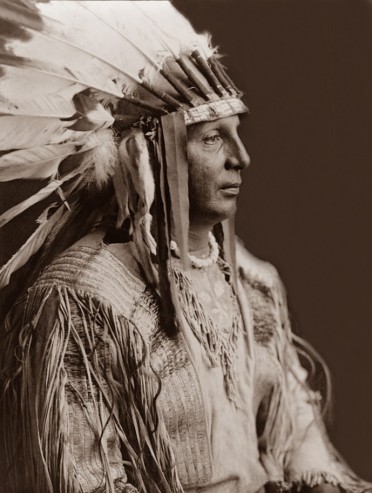 Writers Note:  A poster on Facebook was the inspiration for today’s blog.  The poster shows the face of an Indian chief railing against new immigrants.  I thought the poster was thought provoking, so I put my own twist on the issue.

It was a Sunday.

Boulevards normally jammed with traffic were less so and moved more freely.  It was a day of leisure.  People were out and about.

The park was busier than the day before.  Children ran in circles.  There was laughter.  Music played.

And, my eighth run began alongside the concrete aqueduct.

Just as the day before, I ran about a mile, and then veered off the right.  I scaled the first wall effortlessly and ran a considerable distance before coming upon the same cinder block barricade I remembered from the previous day.

I had arrived at the blue tent.

But this time, the tent had an occupant.  A small-framed man, perhaps 30 or so, sat upright on what appeared to be a sleeping bag.  I did not want to startle or disturb the man.  So, I quietly made my way over the wall and began to proceed down the path to continue my run.

Suddenly, one of the dogs started barking.  And the other dogs too, joined in unison.  The canine alarm bells had gone off.

I could not see the man’s face clearly.  But, he must have been fearful.  After all, few passersby run along the aqueduct and certainly no one scales over two barricades – on a weekend, no less – to invade the solitude this man had etched for himself in what was a gigantic foreign metropolis.

Alerted by the barking mutts, the man quickly rose to his feet when he saw me.  He appeared startled, and it was easy to understand why this was so.

Seeing a invader passing along the aqueduct, in a place off-limits to pedestrian traffic, had to be a terrifying prospect for this frightened man resting in solace, who was clearly Hispanic, probably Mexican — and almost certainly an illegal alien.

That’s right — an illegal alien.  Chew on those words for a moment.