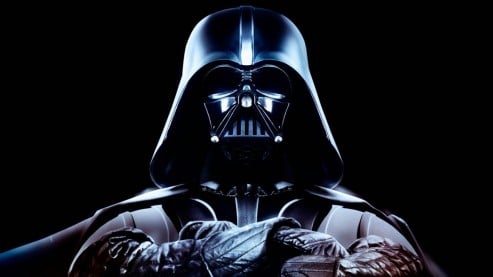 “Star Wars” comes out tomorrow.  Everywhere you look, it’s “Star Wars” this and “Star Wars” that.  The movie isn’t even out yet, and I’m already sick of fucking “Star Wars.”   I think most other people are sick of it, too.

So, let’s do something.  Let’s all band together and boycott “Star Wars.”  Let refuse to buy tickets to “Star Wars,” then the movie theaters will end up with a shitload of empty seats and lose a ton of money.  That will teach Hollywood a lesson that we need more foreign-language documentaries, instead of space ship movies.  What a statement that would make!  So, who’s with me on this?

“Star Wars” isn’t only a shitty movie.  It’s a cult.  I read somewhere that “Star Wars” will begin playing in some local movie theaters as early as at 7 am, tomorrow.  Seven fucking AM!  Are you kidding me!  What maniac wakes up that early to go see a shitty movie?  I sure as hell won’t be doing that.  Not me.  You won’t catch me at a movie theater at 7 am, not even if it was free and they were giving away buttered popcorn.  Fuck that!

I’ve also heard rumors there are fanatics out there who plan to see “Star Wars” more than once.  What sane person would do that?  Pay to watch a movie — a second time?  You couldn’t pay me enough money to watch “Citizen Cane” again.  Hell, I even turned the channel when it came on television a few years ago.  I don’re care what critics think — that movie sucked.  But to be fair, it’s not nearly as bad as any of the “Star Wars” movies.  At least there were characters in “Citizen Cane” who were halfway interesting, even though it was filmed in black and white.

“Star Wars” is a video game plastered onto a gigantic movie screen littered with a shitload of freakish characters I can’t understand.  Honestly, I can’t identify with any of them.  Not a one.  They mean nothing to me.  I don’t even know who to cheer for in the fight scenes, between the monkeys, machines, and monsters.  The goddamned thing’s completely pointless to me.  It’s a complete waste of time.  It’s like watching college Lacrosse.

To be honest, I haven’t seen a “Star Wars” movie in a least 20 years, maybe even longer than that.  And, I walked out at a $2 theater — I mean the one with Liam Neesen swinging a lightstick and Natalie Portman who looked like she had lip cancer.  Worst fucking thing I’ve seen, at least until “Inception” came out, another time-wasting mindfuck.  They’ve got to stop making these kinds of movies.  I don’t like them.  Not one bit.

“Star Wars” is impossible to follow.  As I recall, there’s a big guy in a brown gorilla costume who doesn’t say shit for two-and-a-half hours.  He just grunts his way through the entire movie.  How did a brown gorilla end up in outer space?  Did anyone even read the script first to see if the plot’s believable?  Man in gorilla suit?  Houston, we don’t just have a problem.  We’ve got an implausible fucking disaster.  No one’s going to buy into this.  The studio moguls should have shut the set down in mid-production once they saw a movie about gorillas living in outer space.

There’s another character who looks like a robot, actually, more like a trash can.  Trouble is, you can’t understand the high-pitched voice, which sorta comes across like Stephen Hawking, only not nearly as smart.  I wish someone would just unplug his annoying ass and kick him out into the abyss.  But fire a few slugs into him first.  Now, I’d pay to fucking watch that.

Another guy is dressed in all black who wears a Nazi-like helmet (I guess that’s how we know he’s the bad guy).  He’s got a really deep voice which doesn’t even sound real to me.  This is supposed to be someone named “Darth Vader.”  Frankly, I have no idea what the big deal is about this character.  I could play that part in my sleep after three bottles of wine.  No wonder none of these utterly forgettable roles has ever been nominated for an Academy Award.  Not once!  Ever think about that?  See, I told you “Star Wars” is a shit movie.  Even the Hollywood insiders agree with me.

I understand that Harrison Ford is in the cast somewhere.  I usually like Harrison Ford movies, especially when he does serious stuff, but this space ship garbage is totally beneath him.  Poor Harrison Ford must be totally broke to accept such a lousy bit part in a shit movie.  I really feel sorry for him having to accept roles like this.

From what I hear, the senseless plot is impossible to follow.  Normally, I’d post a warning of a spoiler alert coming.  But from the chaos, who the fuck knows what’s happening?  I couldn’t reveal any surprises, even if I wanted to — because I don’t have a fucking clue what’s going on.  I do know most of the action takes place on spaceships, though.  I can’t stand spaceships, unless they’re in a Neil de Grasse Tyson documentary, and even then I’d prefer just the cliffnotes please.

Who the fuck wants to watch this shit?  I sure don’t.  I have zero interest in watching a bunch of computer animated nonsense crafted by nerds for nerds.  I’m not a nerd.  I’m a grown man with real feelings.

Accordingly, I want everyone to stay away from this over-hyped nonsense.  DO NOT BUY A TICKET.  Moreover, do not order the lunchboxes, the dolls, not even a toy.  Try this:  Be a parent for a change.  Be a guardian.  Tell your impressionable young foals “Star War” sucks, because Santa said so.  If you don’t have the balls to do what’s right, blame it on Santa.

There’s history here.  I don’t just spew bullshit without knowing what I’m talking about.  I’ve actually seen two of the previous “Star Wars” movies.  Well, one-and-a-half actually.  They both sucked.  Like I said, I walked out of the Liam Neesen movie.  That was fucking terrible.  Way back in 1978, I did stick it out ’til the end with the original “Star Wars,” which was a total bore except for the scenes Carrie Fisher was in.  Later, she revealed she was doing blow the whole time, even while on the movie set.  I wish she’d have shared some of her blow, because then maybe I could have stuck through it, too.  Maybe you have to be on blow to follow the freaky characters, just like you have to be stoned to go to a Dead concert.

To prove I”m right, I’m going to make an enormous personal sacrifice, like throwing myself on a live hand grenade in the midst of battle.  Later this week, I promise to take one for the elites and go see “Star Wars” and write up a full review about my miserable experience.  Sure, I know already I’m going to despise this movie.  I’ll probably even walk out in the middle the film and cause a scene.  I want everyone to know what I think.  But hey, I promise to give it a chance.  I have an open mind.

That said, I’m going to be very clandestine about my identity.  I do not want to be seen publicly in a movie like this.  I have my reputation to uphold.  Furthermore, I don’t want George Lucas and Disney getting credit for my $15.  So, I plan to lie to the ticket agent and tell them I’m seeing something else instead, so some sleeper with a real director and human characters can get credited with my hard-earned money.  I refuse to support George Lucas and Disney.  Besides, they’re rich enough, already.  For those who break the picket line, I urge you also to lie to the teller and announce you’re seeing a different movie.  We can bankrupt the “Star Wars” empire, if we all stick together.

May the force be with us.