Sonny Bryan’s Smokehouse Barbecue is one of those hidden dives in a lousy part of town that serves not only outstanding food, but also once institutionalized a specific cuisine and way of cooking.

It’s been a Dallas mainstay since 1910.  The original store opened on Inwood Road and Mockingbird Lane, near Love Field Airport, adjacent to Parkland Memorial Hospital, notable because that’s where President Kennedy was pronounced dead all those years ago.

Several other locations have opened up since then — all of them in Dallas.  Why they don’t expand to other markets is a mystery.  I think this establishment and recipe would drive every all the other frauds out of business.  The original family that started the grand tradition of smoking beff retains ownership.  Moreover, the Bryan Family has maintained the same cooking techniques that made this place world-famous.  It’s been featured on The Travel Channel, The Food Network, and in all the popular cuisine press — justifiably so.

Every time I go back to Dallas, I try to make at least one trip to the best (beef) barbecue place in the world — and that’s Sonny Bryan’s.

As you can see, no one comes here for the atmosphere.

You gotta’ love the sign on the front door which basically says the place stays open until the daily brood of meats completely sell out.  Anyone thinking this is just a gimmick, be advised.  Show up anytime after 6 pm at your own risk.  The doors might be locked.  Once they beef is smoked, cut, and sold — turn out the lights because the party’s over.

Lunchtime is when the magic happens, and to my recollection all of my 100 or so meals I’ve wolfed down at Sonny Bryan’s over the past 40 years or so were inhaled during the noon or mid-afternoon shift.

Walk into Sonny Bryan’s any weekday at 1 pm and the usual clientele is likely to be an odd assortment of illegal Mexicans, sweaty construction workers, transit workers, french-cuffed lawyers, and huge percentage of medical staff who are assigned at Parkland and Southwest Medical Center and the University of Texas-Dallas — some of the best hospitals in the country.  I shit you not.

Incredibly, everyone sits together at school desks — that’s right SCHOOL DESKS — which look like they were constructed during the 1880’s and installed during the 1930’s.  If this furniture could talk, who knows what tales are smoked within the etched wood? 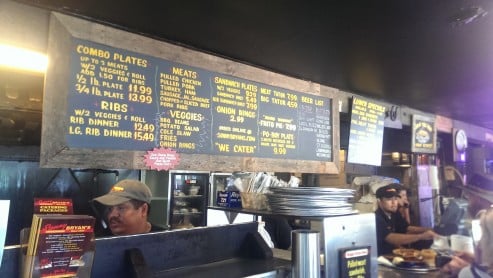 This is not easy to answer.  But let me give you some clues.  Because I know everything about great food and I wouldn’t steer you wrong,  “Steer” — get it?  Ha ha.

First, let me educate you about barbecue.

You want pork barbecue?  Head for Memphis.  Or, North Carolina.  The Deep South is known for barbecue because the foodmiths of yesteryear came up with some creative ways to jazz up pork — a meat not normally associated with great taste and fine dining.  So, slathering some special sauce and slow cooking made magic out of what is normally a pedestrian food.

But Texas and specifically Dallas are known for beef.  And no other city or state or provincial entity cooks beef nor gives it such a royal treatment as the bona fide pit masters of the golden age when was beef and men were men and there wasn’t such a thing as counting calories or worrying about cholesterol.

Two hours ago, I ordered a barbecue beef sandwich, with two sides — onion rings and baked beans.  Plus an iced tea.  Cost me $11.

Here’s the magical ingredient.  The sauce is served in Corona (beer) bottles.  You pour the barbecue sauce onto the meat.  Pure heaven!

ADVISORY:  Do NOT order anything other than the beef brisket.  It’s too die for.  When I pass way, I want to be cremated in one of the Sonny Bryan’s pitmasters and let the world smell my smoke!  Inhale this conservatives! 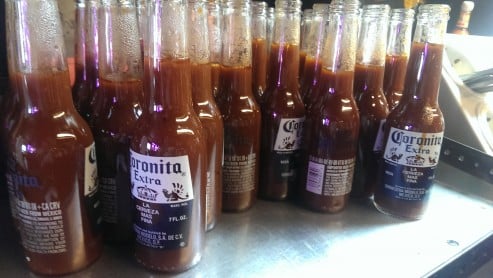 What’s the difference between VERY GOOD food and GREAT food?

Every other place in the universe that serve barbecue serves it the following way:  Meat is piled onto a bun and slathered with sauce.  Sometimes, slaw or other toppings are added.  But that’s basically it.

So, what separates Sonny Bryan’s?

Well first, they paint brush the bread with butter.  Then, it’s heated and burned slightly on the grill surface.  If you think this is a small detail, you’re right.  It is.  AND IT MAKES THE WORLD OF DIFFERENCE!

When you crunch down on the Sonny Bryan’s barbecue sandwich, you not only enjoy the smoked beef, but the spicy sauce, encapsulated with a CRUNCHY sound which is the bun.

Food sex.  Pure unadulterated food sex.  That’s what this moment is like. 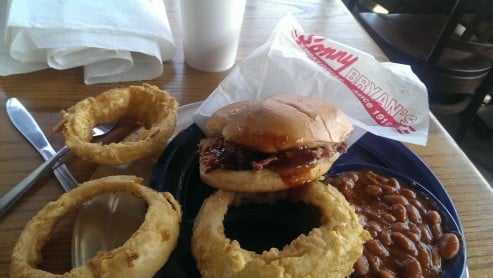 Look at those crispy onion rings.  The beans were average.  Need some work.  Small complaint.  The sandwich also isn’t the size it once was, but I can’t complain about this royal meal for $11.  After all, there is a simple solution.

I used to order two sandwiches each time I came in, and then would waddle out $16 poorer after the best barbecue meal in the world.

Today, I restricted myself to just one sandwich.

In the past, I’ve taken a motley medley of personalities to Sonny Bryan’s.  Each time, I think they were impressed.  Why?  How do I know?