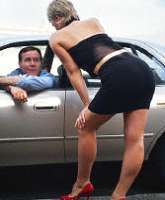 LOVE INTEREST #2 — Still sniffling from the sting of getting dumped by Trump, next it was Herman Cain’s turn for a quick roll in the sack.  A bit of a playboy, this suited Cain just fine.  We finally found something Cain was actually good at, other than making pizza.  Trouble was, once the party discovered Cain was banging pretty much every other girl in the class, Republican faithful announced they’d had enough.  They pretended not to even know him.  A short time later, Cain was expelled from school.

LOVE INTEREST #3 — Fed up being burned by men, next the party turned to a woman.  Michele Bachmann became the favored frontrunner in July 2011.  Then, the couple made a trip to Iowa where a spat developed.  After two weeks of making out in the back seat, Republicans decided to break up.

LOVE INTEREST #4 — Next, it was Rick Perry’s turn.  The Texas Governor jumped into the race and immediately became the party’s new favorite son.  They hoped he’d be “the one.”  He sure looked like a good catch.  Then, when dapper Perry actually started opening his mouth and tried to speak — making a number of mind-boggling comments (“I would send troops back into Iraq”) — Republicans bolted from his car like he had a raging case of herpes.

LOVE INTEREST #5 — Newt Gingrich was no stranger to juggling mutliple women.  He got a little piece of the action, too.  Trouble was, everyone pretty much knew Gingrich — despite being the smartest kid in class — was the school’s Cassanova.  He never really stood a chance at becoming “Mr. Republican.”

With wedding day approaching, by February 2012, there were only two serious suiters left in the room — unless one counts the funny uncle known as Ron Paul.  The girl had a tough decision to make.

One boy was the class nerd who would surely be a great financial catch.  But he wasn’t very sexy.  That left one final alternative.

LOVE INTEREST #6 — If the Republican bachelorette had a last-minute party, the stripper who did the final lapdance was Rick Santorum.  Although the former Pennsylvania senator never actually led in the polls, he did enjoy a brief fling when he won three straight primaries.  There’s wasn’t any real love between the two perhaps, so we’ll call this another overnight stand.

So, looking back on Mitt the groom and his double-crossing Republican bride — the man who ended up in the tuxedo and tails is their seventh choice.

Correction — make that their eighth choice.

LOVE INTEREST #7 — Lets not forget that just four years ago when the competition was easier, Mitt couldn’t even win the bride’s affections.  He lost the girl to a doddering white-haired 72-year-old from Arizona that half of his own party despised eight years earlier.

Putting this all into perspective, this is the guy who was chugging along for five long years at 25 percent in the polls, while the cheerleader was jumping in and out of bed with just about everyone else in the schoolyard.

This girl hasn’t just been around the block.  She’s test driven every frontrunner and lapped the field in the Daytona 500.

LOVE INTEREST #8 — After courting prospective fiances named John, Donald, Herman, Michele, Rick, Newt, Rick (the second Rick — a different one from the first) as flavors of the month, Mitt Romney now ends up before the national congregation getting “sloppy eighths” from the girl in the hopelessly stained wedding dress.  The credibility completely shot, they abruptly want the rest of the class to forget about all their prior political promiscuity.  They want the whole school to develp a case of amnesia about their own lackluster affections and now suddenly get enthusiastic about the candidate they pretty much ran around on for the last five years — the faithful man waiting off in the wings waiting for the girl to finally say “yes.”

Be careful Mitt, her judgement has already proven to be suspect.  She can’t be trusted.  And sure as hell has a lot of mileage on her.

Yeah, I have a question for you, Mitt.
“How does it feel to be your party’s 8th-round draft choice?”