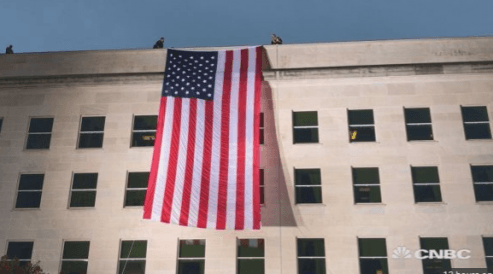 Writer’s Note:  This marks the first time I’ve written about the events of September 11, 2001.  I resided at 1201 South Eads Street, located in the Crystal City section of Arlington, Virginia.  My ninth-floor residence at The Bennington overlooked the Pentagon.  I remember that morning.

The memory that still haunts me to this day is of a man whose name I do not know.

The morning after that horrible day, the man stood in solitude a few hundred feet away from the smoldering southwest side of the Pentagon.  He looked and he stared at the scene of horror.  The man appeared to be struggling to make sense of it all.  He seemed to be waiting for someone to return.

That man stood there all morning and all afternoon.  His eyes gazed into an empty chamber, where the façade of a formidable building had once stood.  Now, all that filled the void was a collapsed pile of rubble shielded by grey clouds of smoke rising ominously into the air.

The following day – 48 hours removed from the time of the tragedy – the man dutifully returned once again to the Pentagon.  He stood in the same spot where he had waited in vain during the previous day.  He continued to look and stare into the ashes.

The man was looking for his wife.

Still shocked by it all and in an utter state of disbelief, he held onto the only thing he had left –hope.  Indeed, hope was all that sustained him — the hope that by some miracle his wife would somehow be found safe beneath it all and somehow leap from the ashes and rush toward into his open arms.

I remember seeing that man whose wife must have worked on one of the floors that were hit during the attack.  He certainly wasn’t alone in suffering a loss far beyond human comprehension.  His sad story was one of many sad stories – of good people who lost their husbands and wives, brothers and sisters, sons and daughters, friends and colleagues.  All gone.

The image of that man staring into the smoke and waiting for his wife holding onto the faintest of hope is the memory I keep above all others from that terrible time in our history.

He’s unlikely to ever find the answer to the question he’s asked a thousand times.  Namely — why?

That’s an answer no one knows.

Balcony view from the 9th floor of The Bennington, before the attack

The first thing I remember from that gorgeous Tuesday morning was the sound of an explosion or at least the sound of something very unpleasant.

Such a disturbance wasn’t unusual.  After all, I lived in a congested city with several high-rise apartment buildings surrounding the perch.  There was always lots of heavy traffic and the usual ambient noise of horns and sirens.  Washington National Airport was less than a mile away, emanating a steady hum of aircraft engines.  There were always accidents happening along I-395, the main artery for suburban Northern Virginian commuters who were headed into the District of Columbia, many of them were civil servants.

Yes, I heard the loud crash.  So what was my reaction?  I promptly rolled over and went back to bed.

“Did you see what’s happening?” the voice said.

I recognized the voice instantly.  It was my wife, Marieta.  She was at work.

“What?  What are you talking about? I asked — barely conscious from my peaceful slumber.

I located the remote, pressed a button, and for the first time saw an indelible image that remains seared into my mind.

Most of us probably remember our reactions upon first seeing the World Trade Center towers on fire.  Disbelief.  Panic.  Terror.  Horror.  Sadness.  Anguish.

“What in the hell happened?” I asked.

“I don’t know — but there’s a report that something just happened at the Pentagon,” Marieta said.  “Can you glance outside and have a look?”

From the distance, the sky appeared to be clear.  But as I moved towards our sliding glass doors I began to see a haze.  Then, I caught sight of giant plumes of thick black smoke rising high into the air.  Doors opened, next, I heard the wailing sounds of sirens.  It seemed like hundreds of sirens.  Fire trucks and police cars roared by, all headed to the spot where, off in the distance, there was a concentration of smoke and fire.

The next minute or two was a blur.

The World Trade Center was in flames.  Not one tower, but both towers.  The Pentagon too was now burning.

I had been awake for perhaps five minutes.

I returned to the television and stood in front of the screen.  The image of New York’s burning towers was unchanged.

The announcer stopped what he was saying in mid-sentence.  The first tower began to collapse.

I’m not sure why — but the distress of seeing the Pentagon in flames just outside my door was not nearly the shock of watching that tall tower crumble to the ground.  My first reaction, quite frankly, was — the end of the world was here.

Perhaps in retrospect — that’s an absurd overreaction.  But that’s honestly what I felt at the time.  Our world was about to come to an end.  Maybe that’s just how shocking it all was — seeing so many ghastly images within such a short time.  Our ability to make sense of things shuts down.  Logic abandons us.  We all become susceptible to panic.

Marieta too, speaking on the other end of the phone, saw the tower fall — first one and then two.  What was happening?   Were we all under attack?

Since my wife worked on Pennsylvania Avenue, just two blocks from the White House, she had a different perspective on things.  Word came that the White House and Old Executive Office Building were both being evacuated.  Presidential advisors were actually running out into the streets.  There was a rumor that another hijacked airplane was headed towards the White House.  A similar thing reportedly happened over on Capitol Hill.  All along Pennsylvania Avenue, people were flooding out of office buildings and spilling onto the busy boulevard.

Metro service abruptly stopped.  This suspension of subway trains meant tens of thousands of government workers from outside the District had no way of getting home.  Cell phone service also became a problem.  Cars were not allowed into the District.

Marieta and I continued to discuss the events of the day and quickly hatched out a plan.  We agreed that she should leave the building immediately and start walking from Pennsylvania Avenue towards the Lincoln Memorial, perhaps 20 blocks away.  It was agreed that I’d come and meet her on the District side of the Memorial Bridge, which is the span that crosses from Virginia into Washington, D.C.  I estimated that it would take us each about an hour to walk the distance and meet.

I was about to get my first close-up look at the Pentagon.

I had no intention of bearing witness to what was going on at the Pentagon that day, terrible as those events were.  But the five-sided symbol of the most powerful military force in the history of the world stood smack dab between my current location and the Memorial Bridge.

And so by foot, off I went.

The Pentagon is normally an ultra-high-security area.  Aside from the mammoth-sized Pentagon bus depot and metro station, no one gets inside or anywhere near to the building unless they’re wearing a military uniform with lots of brass or have one of the government-issued IDs around their neck, festooned by a chain.

But that didn’t matter.

Once on the periphery of the Pentagon, skirting its northern corridor on foot, I was on the direct opposite side of the crash site.  Hundreds of military personnel — from every branch of the armed forces — were running around in panic.  Some were screaming orders to subordinates.  Secretaries and support workers sat in the grass.  The entire building of thousands of workers had been evacuated.  Many seemed to be setting up some kind of triage.  There were armed soldiers everywhere.  Majors, Colonels, and even Generals were a dime a dozen.  It was like a scene right out of a disaster movie.

I walked across the freshly mowed green grass, over paved roads empty of traffic, stepping over curbs, until the muffled shouts of important men were far off in the distance.  Minutes later, I could no longer see the Pentagon from my vantage point.  But I could still see smoke in the air and smell its stench — a frightening reminder of death.  It was a surreal experience, walking through Lady Bird Johnson Park so full of flowers along the George Washington Memorial Parkway on such a beautiful day.  On any other say, this would have been a splendid experience.  But here I was perhaps a quarter-mile away from the spot where hundreds of people had just lost their lives, headed towards the nation’s capital on foot, which could very well be under attack.

I walked on.  Further still.

Sometime later, I was standing on the east side of the Memorial Bridge, where I saw Marieta waiting faithfully.

The site of Marieta that day was something I will never forget.  I think she looked more beautiful at that instant than any other day I had seen her.

I’m not sure what happened next.  An embrace likely.  A kiss to be sure.  Another embrace, and then another.  We held each other a little longer at that moment.

We walked home tearfully, once again passing by the fringes of the Pentagon.

This photo shows the Pentagon and the Crystal City district of Arlington, VA. Above the Pentagon is a white building. Directly above that is a larger and darker building, which is The Bennington — where we lived from 1994 through 2002. Off to the left side of the photo is Washington’s National Airport.

In the days that followed, we visited the southwest side of the Pentagon — not out of morbid curiosity but to pay respects.

We didn’t know anyone by name.  But they were still our neighbors.  It took nearly a week for the smoke to go finally away.  Day by day, the fire slowly went out and the smoke gradually dissipated.

But the shock and the pain and the outrage lingered.

That man could have been me.  And he could have been I.  But by an odd twist of fate whereby his wife just so happened to be employed on one of the floors of the Pentagon and my wife worked a few blocks from the White House, we had much in common.

But at that instant, we had nothing in common.  Nothing at all.

I had survived that day intact.

That man did not survive.  Although there in body, he was no longer there in spirit.

PHOTOS: REMEMBERING A VISIT TO THE WORLD TRADE CENTER