Players Television Network — Looking Back on the Life of Stu Ungar 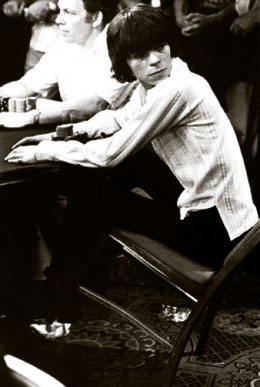 The short-lived Players Television Network debuted at the 2005 World Series of Poker.

I was asked to moderate two panel discussions, which were later broadcast via “On Demand.”  The first show was on the late-great poker legend Stu Ungar.  The second show was a panel discussion about the business of online poker.

I wasn’t at all prepared to assume the role of moderator.  I recall leaving the rigors of my job at the WSOP for an hour or so, getting abruptly fitted with a microphone, and then walking out and taking a seat in front of a live studio audience and rolling television cameras with no script.

The good thing about the unrehearsed format is that everything was spontaneous.  The bad thing is the show could have been much crisper had I been prepared.  Looking back now, I certainly would have asked more penetrating questions than what appears here.

Fortunately, the four guests who appeared on the Stu Ungar segment were outstanding.  Madeline Ungar (Stuey’s former wife), Stefanie Ungar (Stuey’s Daughter), Larry Grossman (Las Vegas radio personality and gambling authority), and Peter Alson (writer and my co-author on Stuey’s biography One of a Kind) were all in top form.

In the coming weeks and months ahead, from time to time, I’ll be writing more about my personal recollections of Ungar — particularly during that tragic final year of his life when I spent the most time with him.  I look forward to telling some stories that were not included in the book which might interest poker fans.

In the meantime, here’s the panel discussion from 2005 that runs about 30 minutes in length.