Categories Menu
Home » Blog » Who Would Pay Money to See This Quack?

Who Would Pay Money to See This Quack? 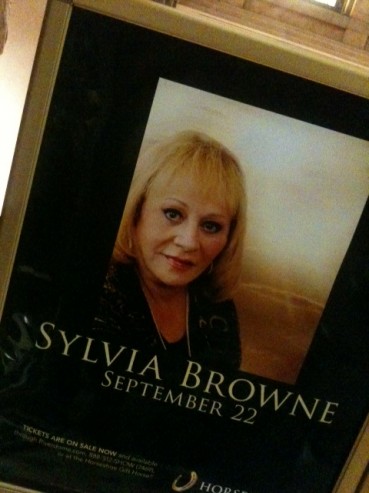 On the list of the world’s most hideous people, this piece of shit is very near the top.

Her name is Sylvia Browne, and for those of you fortunate enough to have never heard of her, she’s a self-described “spiritual teacher and psychic.”

And in a related news story — I’m the Pope.

This charlatan might have some mild entertainment value if some people didn’t take her so seriously.  In a sort of Andy Kaufman sort of way, she could be a knee-slapping riot.  If she was performing on The Gong Show, her charade would be so fucking bad, it actually might be pretty good.

Trouble is — she’s not amusing people.  On the contrary, she’s hurting people.  Lots of people.  She’s been touring the country during the last few months, shaking down her hopeless audience members (and dare I say “fans”) who have absolutely no clue they’re little more than the latest generation of frightened townsfolk getting pitched with the snake oil.

It’s really hard to believe we’re living in the 21st Century here — that people believe the same bullshit that’s been shoveled since the days of Pythia, the very first Sylvia Browne incarnate who did her very own Three-Card Monte act way back in ancient Greece.  At least poor Pytha had the decency to commit suicide at the age of 30 — thus sparing the world’s most advanced society at the time more of her delusions.  Browne couldn’t do us that favor.  She’s still conning people to this day, and going strong well into her 70s.

No doubt, Browne is very good at what she does.  He’s a real pro.  Indeed, most con-artists are good at what they do.  She’s flimflammed her devotees — typically made up of older, poorly-educated women grappling with depression.  Browne has even managed to convince some of these people that she possesses supernatural powers.  And so, she does what any heartless self-promoting opportunist would do.  She bilks her followers out of a few bucks.  Make that 47 bucks a pop, which is the standard ticket price for her show.

Browne spends much of her time flying around the country masquerading as some kind of 100,00-watt antenna to the grave.  Her act pretty much consists of duping people who are so emotionally vulnerable and so utterly desperate for answers, that they’ll often drive hundreds of miles to witness her onstage “readings.”  Many come with hopes they’ll get lucky enough to be chosen amongst hundreds with similar problems sitting in what amounts to a clusterfuck of basketcases.  Most seek answers to questions that simply cannot be answered.  They beg for solace.  They long for inner peace.  And the grand dame of duplicity, Sylvia Browne is right there on center stage to deliver on cue what they’re so desperate to hear — even if it means abandoning all sense of human decency.

By any measure, Sylvia Browns’ track record is spotty at best, and revolting at worst.  Here’s a video clip from CNN which shows the misery this woman has caused some of her most vulnerable victims when she’s pretended to possess psychic powers:

I’ve been a devoted reader and subscriber to two magazines that dedicate a large amount of time and space to debunking charlatans like Sylvia Browne.  It’s astonishing that such lunacy needs debunking in this day and age, but it does.  The magazines are called Skeptic and Skeptical Inquirer.  If you’ve not done so already, I urge you to take a look at these excellent sources of enlightenment.

Both periodicals regularly feature two of my personal heroes — James Randi (a.k.a. “The Amazing Randi”) and Michael Shermer (the science writer and editor).  Both are well-respected researchers who also happen to be self-professed skeptics.  I love the term “skeptic” — so much so that I’ve adopted this word as a sort of badge into my most passionate personal belief system.

Contrary to the often misused and misunderstood term, real skepticism has absolutely nothing to do with negatively or being close-minded.  Alas, most skeptics are very open-minded.  We are thirsty for new ideas.  We are eager to explore new avenues of looking at problems and discover alternative solutions.  Where we deviate severely from mystics and soothsayers, who base their convictions on blind faith, is insisting that supernatural claims demand even more persuasive evidence if they are to be believed.  For instance, if I claim purple elephants flew above my bed last night, I damn well better have some incredibly powerful evidence to prove my claims.  Otherwise, you should consider me a quack.

On second thought — maybe she is.

This weekend, Sylvia Browne’s circus tent of deceit rolls into Bossier City, Louisiana — the place where I’m now staying.  She’s performing a Saturday night show at a nearby casino.  I understand it’s already a complete sell-out.  Apparently, she’s become the Jay-Z of charlatans, with all due respect to her equally disgraceful ethically-challenged cousin, John Edward.

While I refuse to pay a dime to buy a ticket, I will get into that show.  I promise you.

And once I’m inside, I’ll be taking copious notes.  Look for a detailed review of her show coming sometime next week.

I expect that Browne will torment my rationality.  She’ll somehow try and convince her audience the dearly departed have waited years, even decades, to communicate with their loved ones.  Presumably, they’ll choose this Saturday night as the place to finally reveal themselves — not inside a church, nor on a mountaintop, not on a beach, not on a tower, nor in meditation, nor in some quiet moment of reflective bliss — but inside a worn-out casino ballroom that normally features rock n’ roll and country-music has-beens.

So after all these years of waiting, Grandpa will finally be heard, assuming his voice is audible above the deafening bells of slot machines and craps tables.

Sadly, all those who elect instead to bypass Sylvia Brown’s show this Saturday — people who undoubtedly have just as many dead relatives hanging out somewhere desperate to speak through mediums like Sylvia Brown — won’t be hearing the voices of the departed.  Since they didn’t pay the $47 ticket price to get in, they’re fucked.  Selfish bastards.  And Grandpa really had something important to say.

No doubt, I’ll be hearing a few voices inside my head when I exit the theater.  And those piercing voices of vulgarity are going to going to be heard — loud and clear.