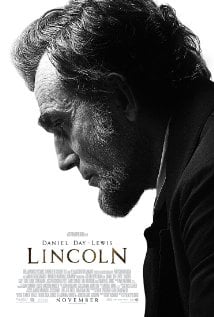 Portraying historical figures on film is a daunting challenge.  Such is particularly the case for beloved American icons with well-established identities.

The filmmaker’s challenge rests not so much in recreating history.  Typically, plenty of credible narratives exist which provide multiple accounts of the icon’s role in history.

What’s toughest is striking the right balance between realism and art, melding history with entertainment, and doing what would seem impossible — satisfying academics, film critics, and the fickle ticket-buying, movie-going public.

This is where Lincoln, the new film by director Stephen Spielberg ultimately soars on at least one account, but fails in others.

Based in part on a book by noted presidential historian Doris Kearns Goodwin, the film concentrates on the final five months of Abraham Lincoln’s life.  Surprisingly, this is not a war movie as much as an intriguing political drama.  The film’s primary focus is the struggle to pass the 13th Amendment to the U.S. Constitution.  That’s the amendment which essentially outlaws slavery in America (Note:  To be precise, the famed Emancipation Proclamation was a war directive.  It took an actual amendment to the Constitution to obfuscate state laws on slavery).

The gauntlet is laid down in the U.S. House of Representatives, where a two-thirds voting majority is needed to change America forever.  Remarkably, the movement to pass the 13th Amendment is exactly 20 votes short.  Virtually all of Lincoln’s advisers, most notably Secretary of State William Seward (played to perfection by the consistently-excellent David Strathairn), pleads with the 16th President to abandon the fight and focus instead on ending the Civil War as quickly as possible.

Lincoln, the great visionary leader that he was, willed the amendment to passage by the sheer force of his personality and his utter willingness to do whatever was pragmatically necessary to gain the additional votes.  And so, this film largely focuses on that arduous process — of gaining one essential vote at a time towards the creation of a more perfect union.

If all this sounds a bit wordy and too technical, then that underlines one of the major flaws of Lincoln, the film.  During most of the two-hour showing, I felt as though I was sitting back in my high school history class.  It’s arguably the most “anti-Spielberg” film since A Color Purple, completely void of special effects and the wizardry that’s characteristic of Spielberg’s mastery.  Think of Masterpiece Theater on PBS.

An otherwise enviable effort — one that would probably be a massive commercial failure were Spielberg’s name not attached to it — is largely carried by the outstanding performance of the lead character, which we’ll get to in a moment.  One has to admire the filmmakers — including Spielberg and screenwriter Tony Kushner, of Munich fame — for not sentimentalizing the material (too much).  The creators appear to understand the gravity of the subject matter here, that what’s portrayed on film and seen by millions in the decades to come essentially becomes the interpretation of history.  Oliver Stone’s abomination Nixon is one of the worst examples of a film that will probably be around for a long time after most of the Nixon biographies have gathered layers of dust on library bookshelves.  Fortunately, this is a film which is praiseworthy from some historical standpoints.  Then again, it misses badly on others.

Two outlandish scenes occur  in the movie.  In the opening scene, a young Black soldier fighting for the Union Army is shown having a conversation with the President in the midst of battle.  To my knowledge, such a scene would have been almost unthinkable for those times.  But then, things go from doubtful to preposterous.  The young Black soldier actually questions President Lincoln with some barbed comments, mostly about freedom and equal rights for all people.  No doubt, this is a dramatic device added to humanize the fight to end slavery.  But it’s also unnecessary and quite frankly, laughable.  Another scene includes President Lincoln talking to one of his servants, a young Black woman.  While such a personal exchange could have conceivably happened, it’s unlikely that this young servant would have provided him with political counsel.

Which brings us to Lincoln — the man, the President and the actor who portrays him, notably Daniel Day-Lewis.  This is an extraordinary performance by perhaps the best film actor working today.  I’ve long marveled at Day-Lewis’ broad range of characters, from the villain in Gangs of New York to an equally mesmerizing figure in There Will be Blood.  To think Day-Lewis, who holds duel Irish and English citizenship, could manage to pull off absolute perfection in the role of perhaps America’s most revered historical figure is an astonishing testament to the craft of film acting.  He’s exceptional.  Look for Day-Lewis to deservedly win a third Best Actor Oscar.

Every grueling detail of Lincoln’s mannerisms — his voice, his tone, his walk, and the disposition of his very presence — are as exactly as one would hope and expect, which is not to say that any of this is predictable.  After all, how exactly does one pull off the voice of a man who’s voice was never recorded?  How does an actor combine the expressionism of a largely self-educated Kentucky-born plainsman who becomes President, making him sound hokey but also wise?  Day-Lewis’ role will be favorably compared to Helen Mirren (The Queen), Meryl Streep (The Iron Lady), and Colin Firth (The King’s Speech).  But I think this was better, or at least more worthy of praise since a new benchmark has been hit here with the portrayal of iconic historical figures.

Still, Day-Lewis’ marvelous performance isn’t quite enough to make what is a good movie into a film classic.  Some of the supporting roles, widely praised by most critics, aren’t nearly as convincing in my judgement.  James Spader is perfectly cast as the unscrupulous lobbyist burdened with the task of being the President’s bag man during what was our nation’s most politically corrupt period.  But I still couldn’t forget for an instant that I was watching James Spader portray some guy that lived 150 years ago.  I was reminded of Jude Law playing Watson in the Sherlock Holmes series.

Then, there’s Tommy Lee Jones, who somehow managed to keep his West Texas accent in this mid-19th Century period piece, despite the fact the Senator he’s portraying is from Pennsylvania.  I enjoy Jones’ work and his character, Thaddeus Stevens is actually more admirable in many ways than the title character Lincoln himself.  But Jones, displaying the same heavy-handed bombast in every character he’s played since The Fugitive, struck me as another out of tune chord in the Lincoln piano.

Then, there’s poor Sally Field, regretfully cast in the critical role of Mary Todd Lincoln.  Aside from the fact she’s at least twenty years older than the real Mrs. Lincoln, her character is an affront to actual history.  For instance, there’s no record nor way Mrs. Lincoln attended the actual floor debates in the House of Representatives.  But Sally Field gets her To Kill a Mockingbird moment, lending spousal encouragement from the front row balcony.

A few final thoughts:  Those who go and see Lincoln (and I should note that this film should be seen) will probably be surprised as I was at how casual political Washington was in those times.  Lincoln has virtually no personal security.  The inside of the White House looks as cluttered with dust and worthless junk as my first D.C. apartment off of 17th Street.  The imagery makes for one of the film’s most interesting viewing pleasures — seeing what day to day life was like in the chambers of power during the most critical phase of this nation’s history.

Speaking of that history, Lincoln’s final grade as a film will be reduced for what I consider a travesty.  The blame rests alone with Spielberg.  In one of the final scenes, when the climactic roll call vote is played out in Congress, each and every member of the House of Representatives must take a stand.  Each man is required to take a position on the right or wrong side of history.  Yet many of the names you will hear in the film have been changed.

In the film’s pre-release publicity tour, Spielberg explained his decision.  He acknowledged that he changed the actual names of many Congressmen who voted against the 13th Amendment.  His justification for doing this was (he said) not to embarrass the living descendants of these men.

Such gross misrepresentation of fact needs no counterargument.

Those who were dead wrong, and who made the painful struggle for racial equality for all citizens more difficult should be exposed and known to all — especially in a work which is presumably to be the most widely-seen recreation of this period of our history.  It’s mind-boggling that many of these names you will not hear in this movie, men who basically went on record against equality, have their names emblazoned on street signs and public buildings all over the country.  They are local heros and icons because no one has dared to set the record straight.  Make no mistake.  These are despicable people who abdicated all human decency when it mattered most.

I’d like to know those names.  They should be known.  History and justice demands it.  But instead, Spielberg chooses to scrub away and sanitize the stains of blood.  And that’s not just wrong.  It’s a historical cover up.