Poker Hall of Fame — Past and Present (A Photo Essay)

It’s a privilege to be one of the 42 voting members for the Poker Hall of Fame.

This year’s class of ten nominees makes for one of the toughest ballots choices in history.  The decision of voters is difficult, since virtually all those selected by the general public and the nominating committee are worthy of serious consideration.  Looking at these names, I do believe that a majority of the nominees on this year’s list will eventually be inducted into poker’s most prestigious fraternity.  For most of the people on this list, it’s just a matter of time.

One of the perks of working in poker for so long is being acquainted with many of the top players in the game, including quite a few poker legends.  Over the years, I’ve managed to take a great many photographs.  This was before camera phones existed, when you had to buy rolls of film and ten carefully choose the best shots.  Most of these photos have never been published before, in part because I’m a lousy photographer.

That said, in the coming months ahead, I’ll post a collection of photos that I’ve snapped over the years, taken between 1993 and the present.  I’ve probably accumulated 500 or so interesting photos, which is a decent collection, but nothing on par with past WSOP photographers including Eric Harkins, Larry Grossman, or Ulvis Alberts.  They have thousands, if not tens of thousands of images.

Today, I’m including a mix of poker players connected in some way to the Poker Hall of Fame discussion, along with my memories of what was going on when the photo was taken. 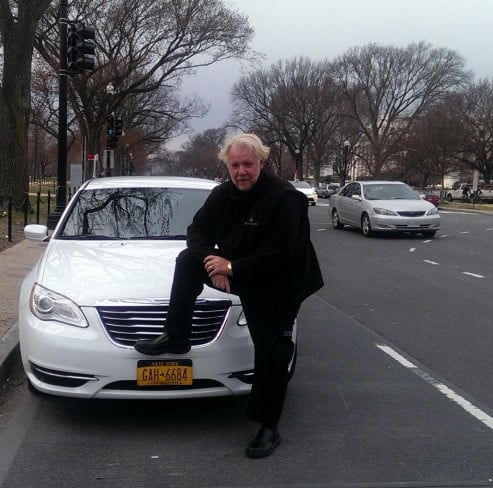 Photo taken a few days ago in March 2014 while on Constitution Avenue, in Washington, DC

Visiting the same place 29 years later — did it change, or did I?

We never know if or when we’ll return to the places we’ve been before.

Not only do places change, but people change, too — even though the changes aren’t readily apparent from day to day.  The gradual lapse of time not only gives one a greater sense of perspective about things, but allows us to re-examine the deeds we’ve done in the past.  Wisdom often comes with a mandatory preamble, “Looking back now….”

While stationed in Bucharest, Romania (1990)

With my then girlfriend (now wife of 22 years), Marieta on one of our early dates (seriously)