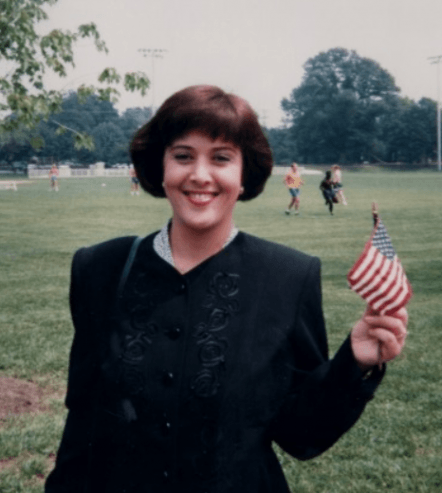 At the annual CPAC convention yesterday, a speaker talking about the beauty of naturalization-citizenship ceremonies drew loud, sustained booing.  Here’s my reaction.

That was a proud moment for her.  She immigrated to the United States from her native Romania, earned a college degree, and then worked at The Learning Channel for a decade.  She studied the citizenship test handbook so vigilantly that she memorized it.  Marieta knew more about the U.S. Constitution than I did.

In March 1996, Marieta joined some 200 other law-abiding immigrants with origins from all over the world at a federal courthouse in Washington, D.C.  This was their big day.  They raised their right hands and took the Oath of Allegiance.  Then, the entire room sang the national anthem together.  Many had tears streaming down their faces.  There were handshakes.  There were hugs.  There was a celebration.

The naturalization ceremonies held in Washington were and perhaps still are just a bit different from similar rituals held in other parts of the country.  The nation’s capital tends to draw more political refugees and asylum cases.  In short, many of these legal immigrants endured brutal hardships prior to arriving in the United States.  Some risked their lives.  Some made excruciating personal decisions to leave their families behind.  But pain and fear were in the past.  Becoming an American citizen meant unlimited future possibilities and new hope.

I recalled those indelible memories when I read yesterday that a speaker was booed loudly at the CPAC convention when speaking precisely about naturalization ceremonies for citizenship.

CPAC is the largest annual gathering of political conservatives in the country.  It’s the All-Star game for the conservative movement.  This isn’t some fringe group.  It’s as mainstream “conservative” as it gets.  The current President of the United States was the keynote speaker.  He followed the head of the National Rifle Association who made a rambling speech that stirred the crowd into a frenzy.  While CPAC might not represent the views of every conservative person in America, it has unmistakably become the face of today’s conservative movement.

Friday’s shocking episode exposes the ugly depths to which the conservative movement has fallen in recent years.  This isn’t the political philosophy illuminated by the Statue of Liberty.  It’s no longer guided by the wisdom of Edmund Burke and Alexis de Tocqueville.  Conservativism has been highjacked by Donald Trump, Wayne LaPierre, and Sean Hannity.  It’s something unrecognizable to good people.  It’s un-American.

Yes, the debate over illegal immigration and what to do about refugees fleeing war zones needs to happen.  Reasonable people can discuss this respectfully and must do so.  Compelling arguments can be made by both sides.

However, there is no debate about the majesty of legal immigration, which has essentially been the people engine that created modern America.  At least there never was a debate — until now.  Keep in mind what was booed at CPAC wasn’t illegal immigration.  It was official ceremonies that welcome new citizens who waited for years and followed the law.  They jeered naturalized citizens like Marieta and countless other arrivals who weren’t blessed like so many of us to be born in this country.  Ironically, they were also, though indirectly booing two of Donald Trumps three wives.

My fellow Americans, let call this what it truly is — PURE HATE.

Photo Credit:  Marieta on one of her proudest days immediately after her naturalization ceremony, on the Washington Mall in 1996.